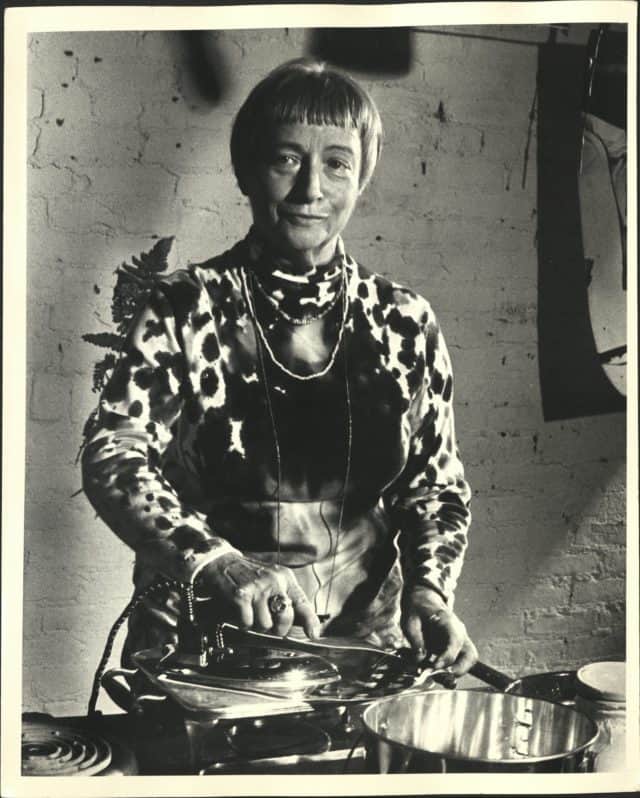 The following is written by academic outreach coordinator Kathryn Reuter.

On Tuesday, October 4th, 2022, join the Stanley Museum of Art & the University of Iowa Libraries’ Special Collections and Archives as they celebrate the 123rd birthday of artist Lil Picard! Crafts and cake will be available in the Stanley Museum lobby from 12-2pm, and there will be a pop-up exhibit of Picard’s artworks and items from her archives in the Visual Laboratory (third floor of the museum). Learn more about the event here.

Lil Picard was born Lilli Elisabeth Benedick in Germany on October 4th, 1899. She got her start as an artist and performer by singing and dancing in cabarets in Berlin in the 1920s.

Later she worked as a fashion editor for German publications until the anti-Semitic policies of the National Socialist Party caused her and her second husband, Henry Odell, to immigrate to the United States in 1936.

In their new home in New York City, Lil Picard took English lessons as well as design and lettering classes. She began selling her accessories and jewelry designs to department stores before establishing her own milliner studio at 555 Madison Avenue in 1939. In 1942, she opened “Custom Hat Box”, a milliner counter in Bloomingdale’s.

In addition to her hat making, Lil Picard supported herself as a journalist, writing for German newspapers and art magazines as well as American publications such as Art Magazine, Andy Warhol’s Interview, and The East Village Other.

As an artist, Lil Picard worked in a variety of mediums including painting, sculpture, watercolor and drawings, collages, assemblages, and performance art. Her performance art, especially, was an avenue for expressing her militant views on the Vietnam War and on social and environmental issues.

From 1955-1981, Lil Picard had fifteen solo exhibitions (in both the United States and Germany) and her work was included in more than forty group shows. She participated in six Avant Garde Festivals of New York between 1967 and 1975. Increasingly blind during her last years, Lil Picard became reclusive, dying without descendants on May 10, 1994.

Today a team of librarians, archivists, and museum professionals from around campus including University Archivist David McCartney again begin teaching a week long Spring Break class, “The Continuing Role of Real Collections.” The students have been researching mystery items as part of the class and often come up with very surprising revelations!  What follows is a post from a student from last year’s class, Lindsay Schroeder, and the surprising story she unearthed:

During spring break of 2013 I took Topics in Museum Studies:The Continuing Role of Real Collections, taught by David McCartney with many prominent guest speakers within the museum and library fields. We were given a project to research artifacts within the University of Iowa that had little to no information connected to them so little is known about what they are. I chose a large painted portrait of a man with a wood, ornate frame and held only one clue, the artist’s signature. This mysterious artifact was found in the University of Iowa’s Museum of Natural History’s attic storage cabinet, hidden between large animal hides this spring.

The artist’s name was Marie Koupal, dated 1882. I researched her name and found an article within the Daily Iowan, dating November 19, 1920. It was about a man named Dr. Mark W. Ranney and his cherished book collection that stood in the Ranney Memorial Library at the University. The article concluded with a major clue, “Besides the books there are about twenty pictures on the walls that belong in the collection. Most of these are portraits…A portrait of Dr. Ranney stands on an easel in one corner of the room. This was done in 1882 by Marie Koupal and is framed in a fine hand made frame of several kinds of wood” (Daily Iowan). This was the same portrait, of Dr. Mark W. Ranney. This object’s original purpose had to be a memorial piece done by Koupal, because on January 13, 1882, Dr. Ranney died of acute pneumonia.

Special Collections has information in their collection guide pertaining to the Dr. Mark Ranney papers, with an additional link to a biographical report written by Margaret Schindler Bryant, in Books at Iowa, Issue 30, April 1979, about Dr. Ranney. This report gave me a lot of information regarding Dr. Ranney and his passion for collecting rare books along with other artifacts. Bryant’s report gave great insight to who this man was and why his portrait was originally located in the library during the 1920s, commemorated on an easel. Dr. Ranney’s wife bequeathed his entire collection to the University of Iowa after her death on July 18, 1907. She left a trust that created the “Mark Ranney Memorial Fund”. This established the Mark Ranney Memorial Library that was located in room 305, Schaeffer Hall.

The day before my report and presentation was due, I was searching the Iowa Digital Library within the time frame of 1920-1940. After endless searching for more concrete information, I came across the ultimate completion of this project, a photograph from the digital database of the Mark Ranney Memorial Library with the portrait of Dr. Ranney on the easel in the 1930s. It was truly amazing and reminded me of why I am in this field of work.

Many thanks to Lindsay Schroeder for identifying this important portrait so it could be reunited with the Ranney Collections in Special Collections!

Four students pursuing certificates in Museum Studies recently completed internships with The University Archives in the Spring 2012 Semester.  Krystal Rusk processed the records of WSUI/KSUI Broadcasting Services, Elizabeth Blind processed the Macbried Field Campus record, Kirsten Glover processed the record of the UI Early Childhood Education Center and Jessica Wittry processed the Murray (Fiske) Family Papers.  Students in libraries, archives and museum studies programs are increasingly finding value in crossing boundaries to find out how different institutions respond to similar concepts and problems.  We would like to thank them very much for their hard work and assistance and wish them well in the future.

Archives offered a unique perspective to complement the goals for each student.  Elizabeth Blind got caught up in the stories that unfolded as she worked, saying, “It taught me that no matter what collection you are working with it has a story to tell–even one mainly comprised of official proposals and budgets. One of the most enjoyable aspects of working with this collection for me was getting to know the people involved with the campus through their letters and correspondences. I really feel like I know Betty van der Smissen and Richard Holzaepfel, two of the campus directors, and enjoyed reading their letters following the establishment and continued maintenance of the Macbride Field Campus.”   She will pair her Museum Studies Certicate with her recently completed BA in Anthropology and minor in Art History working part-time this summer while volunteering at a local museum and applying to Art History masters programs for the fall of 2013.

Jessica Wittry will be a senior in the fall and is a double major in Anthropology and International Studies. She wanted to process a collection because,  “It seems like a very basic part of managing a museum. So many museums have a backlog of items that haven’t been processed, so no one knows exactly what they have and that is crucial in order to both take care of the artifacts and to create an exhibit from them.”  While she has not decided what kind of cultural heritage institution she’d like to work for, she says she learned a lot that applies to any kind of collection.  “In processing a collection I’ve learned about the basic care of manuscripts as well as how to document the collection through creating finding aids for the collection. I’ve also indirectly learned a little about the managerial work involved with running an archive as I would see others helping students use the collections for different types of research.”  Wittry said that one of the highlights for her was finding a letter that she realized came from president Grover Cleveland.  Though the handwriting is tough to make out it seems to involve a discussion of a Judge Parker and specifically mentions imperialism.  Can you help puzzle out what the letter says? 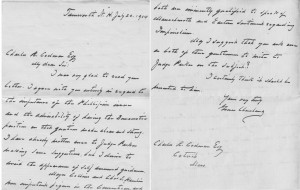