Preservation Projects Librarian, Vitalina Nova, wrote a blog post about the League of United Latino American Citizens Council 10, both their past records and their current projects for the Iowa Women’s Archives blog.

Image on the left from LULAC Council 10 Records, IWA0733 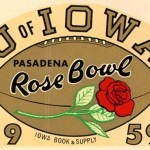 This 1959 Rose Bowl decal was sold by Iowa Book and Supply and donated to the university by 1976 alumnus Vernon Lustick, of Cedar Rapids, Iowa. 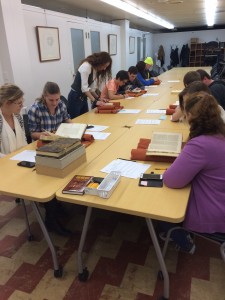 Counting up some totals at the end of the semester, Special Collections (not including the Iowa Women’s Archives) taught 119 class sessions total in the Fall 2015 Semester:

The Descent of Mount Gadam is a new acquisition for our Charlotte Smith miniature book collection. Amos Paul Kennedy published the book in 1993 under the imprint of his Jubilee Press, which was later renamed the Jubalee Press. The text is an adaptation of a folktale of the Mensa Bet-Abrehe people of northern Ethiopia. 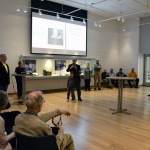 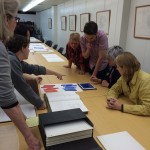