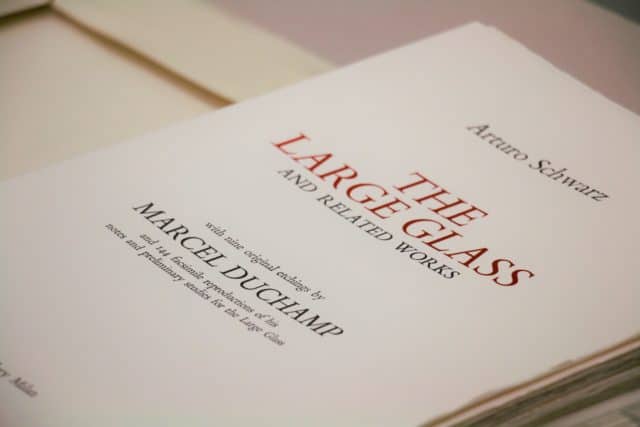 The following is written by International Dada Curator Timothy Shipe.

The latest major acquisition for the International Dada Archive is The Large Glass and Related Works (1967-1968), an impressive collaboration between artist Marcel Duchamp and the Egyptian-born Italian writer and gallery owner Arturo Schwarz. The magnificent set of two large portfolios contains a monograph by Schwarz on Duchamp’s unfinished masterpiece, The Bride Stripped Bare by Her Bachelors, Even (known as the “Large Glass”), housed in the Philadelphia Museum of Art. It is accompanied by an extensive set of facsimiles of Duchamp’s preparatory notes for the “Large Glass,” one of several similar sets of notes the artist published during his lifetime (including the famous “Green Box,” the most precious treasure of the Dada Archive).

But what makes The Large Glass and Related Works most special is the two sets of nine original etchings by Duchamp designed especially for this edition. These are among the last art works by Duchamp, who died in 1968. The first set, titled simply “The Large Glass,” consists mainly of depictions of individual elements taken from that complex work, along with a diagram of what the Glass would have looked like had it been completed.

The Large Glass and Related Works was formerly part of the Ruth and Marvin Sackner Archive of Concrete and Visual Poetry but was deaccessioned before that collection came to Iowa. We were fortunate to have the opportunity to purchase this important work for the Dada Archive, where it will complement the other major Duchamp items that are frequently used in classes in Art History and other fields. 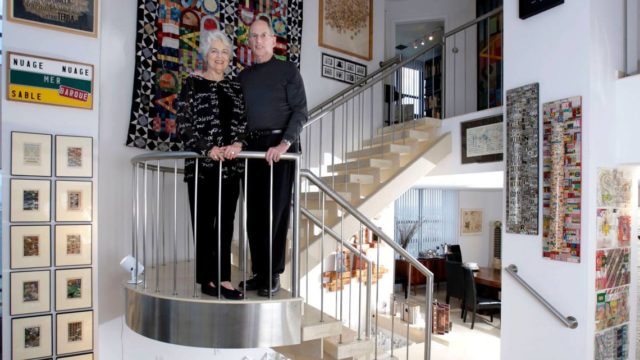 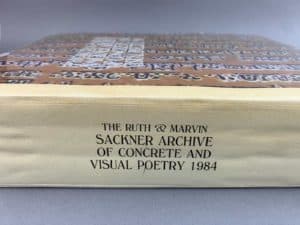