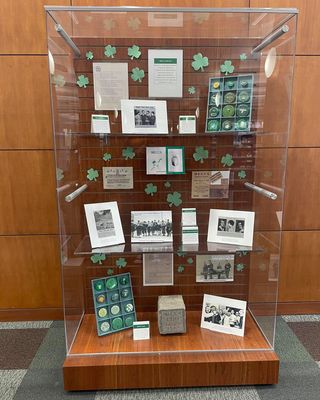 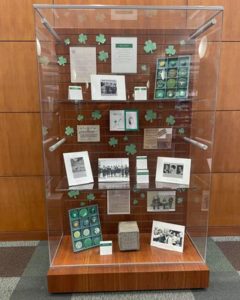 From 1910 until the late 1980s, MECCA Week was an annual celebration of the College of Engineering to honor St. Patrick. The celebration was marked by official events, awards, parties, scavenger hunt for the Blarney Stone, competitions, and pranks against the law students.

The newest exhibit in the Engineering Library display contains artifacts and photos from the MECCA Week Celebration.

The first celebration of St. Patrick at the University of Iowa was on March 17, 1910 and was called the “Engineer’s Celebration of Saint Patrick’s Day”.[2] In 1967, Frederic Goodson Higbee wrote that this event “gave students an opportunity to ‘blow off steam,’ to exploit the work of the College, and to mix a worthwhile demonstration of student effort with an appropriate amount of fun and relaxation from the demands of engineering study.”[3] Another explanation comes from the Daily Iowan in 1965, which claims that “most class cuts occurred on St. Patrick’s Day. The main reason was that St. Patrick is the patron saint of the engineering profession. Class cutting proved highly unpopular with the faculty. It was thus decided that an officially approved celebration would replace class-cutting.”[4] 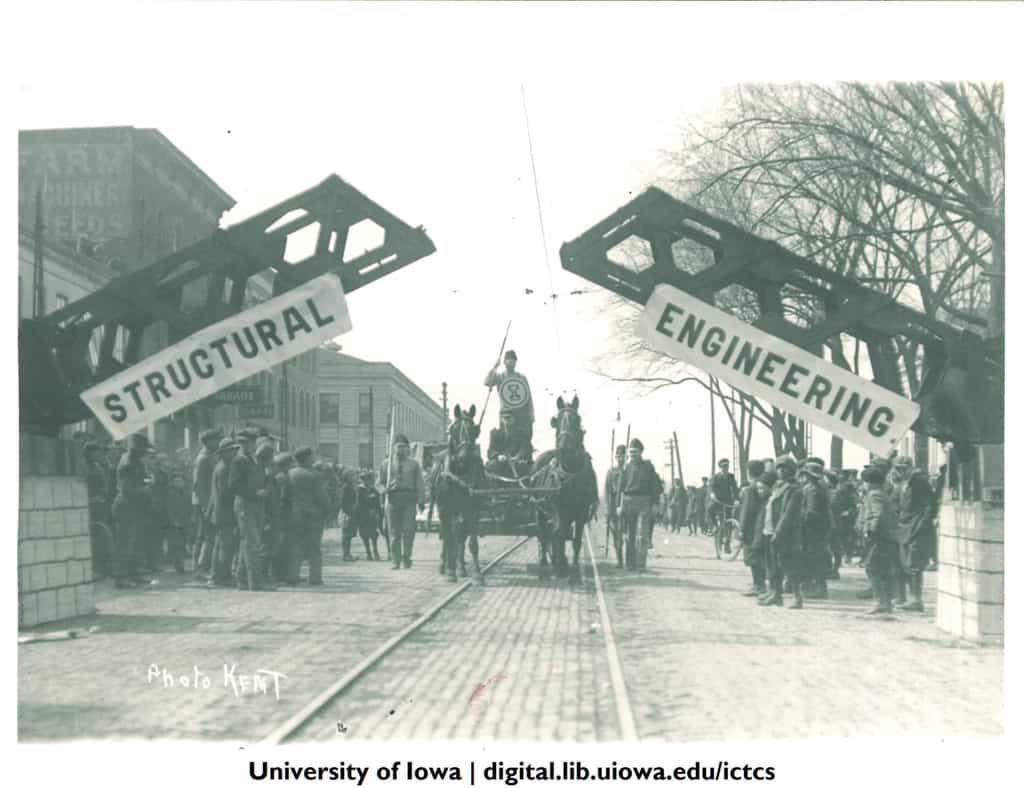 The 1910-1912 “Engineer’s Celebration of Saint Patrick’s Day” at the University of Iowa had a parade, Blarney Stone, Knights of Saint Patrick, and a show. The Daily Iowan describes the events planned for the first celebration as a parade that demonstrates “engineering ability and artistic taste”, the Blarney Stone scavenger hunt, and “a three-act minstrel show will be staged by the enterprising builders of bridges.”[5]

Members of the Iowa City St. Patrick’s Parish argued the association with their Patron Saint with the “antics and buffoonery of the Engineers” was inappropriate. [6] Thus, in 1913, it was announced that the name and of the celebration must be changed. Students decided on the MECCA Celebration. MECCA stands for the engineering departments of Mechanical, Electrical, Civil, Chemical, and Architectural. It was also at this point that an open house and a MECCA Dance were added.[7] The Knights of Saint Patrick would change their name to the Knights of Meccasacius. Its letters are from the 5 departments which spelled MECCA, then the State University of Iowa, (SUI), and the College of Applied Science, (CAS).[8] Then the last 6 letters, SUICAS, were written in reverse order, SACIUS, and combined with MECCA to make MECCASACIUS.

The only event which began in 1910 and continued relatively unchanged was the hunt for the Blarney Stone. The seniors or graduate students hid the stone for the next year’s class to find. The clues were engineering math and word problems with the answer pointing the way to the next clue.

Both law students and engineering students claimed St. Patrick as one of their own which started a rivalry of pranks. Some prank highlights include letting green mice loose in the Law Library, the placement of a manure spreader in the Law Building’s Practice Courtroom, and leading a horse into 3rd floor the Law Building. [12] In 1963, a one-ton concrete shamrock was placed on the Law Building’s Lawn. [13] During the 70’s and 80’s the rivalry turned from pranks to more competitions – such as a bar marathon.

Declining participation and numerous revivals make it difficult to pin down the end of MECCA Week as a celebration. But, the late 1980’s appears to be the end of the annual MECCA. The greatest changes to MECCA Week were not in the event schedule, but were changes in the Engineering College as the school grew from 218 students in 1910 to 1,283 in 1987. MECCA Week was traditionally held the week before St. Patrick’s Day. However, during the middle 1970’s, Spring Break began to be scheduled either before, or beginning on, St. Patrick’s Day which impacted participation and enthusiasm.[14] In 1970, the law students had grown tired of pranks, and received a court injunction against the engineering students to limit their pranks. [15]

MECCA Week began as the College of Applied Science skipping class to have an engineer’s holiday to honor St. Patrick and evolved into a week of events and pranks. The central focus was having fun and relaxing in the middle of a rigorous school year as an engineer. MECCA Week was a week of parties, pranks, and memories that many Iowa Engineering Alumni will always remember.

Please stop in and see the new exhibit!