Women have long played an important part in the areas of science and engineering, but the majority of women are nearly unknown. Sarah Guppy, 1770-1852, invented a method of making safe pilings for bridges; Icie Macy Hoobler, 1892-1984, was a biochemist doing research into nutrition, specifically mothers and children; Emma Perry Carr, 1880-1972), Chair of the Mount Holyoke College chemistry department in 1913, championed collaboration between faculty, graduate and undergraduate students; and Irene Joliot-Curie, 1897-1956, much less well-known than her mother, Marie Curie, she won the Nobel Prize for Chemistry. She also made many contributions in the study of radioactivity.

In Girls coming to tech! a history of American engineering education for women, Amy Sue Bix explores the “gendered history” that has prevented women in the United States from finding their places in the predominately male technical world. Iowa State College (now Iowa State University) admitted women from its opening in 1869, believing that men were being prepared to become intelligent, successful farmers and mechanics, therefore it was essential that women be educated in a manner that would “qualify” them to understand and “discharge their duties as wives & farmers of mechanics.”

Women began working with computers as soon as they were developed. In her book Recoding gender: women’s changing participation in computing, Jane Abbate discusses the early contributions of women to the computing world – from Colossus in Bletchley Park (think Alan Turring) to the Electronic Numerical Integrator and Computer (ENIAC) in America – and how both used teams of women to operate them. For a fascinating look at how women with mathematical training moved into being “human computers” see the DVD Top Secret Rosies. It is the history of women recruited to be the “Rosie the Riverters” of mathematics for the U.S. Army. They used differential equations to figure trajectories for bombs and ammunitions, were a vital part of the war effort and were the earliest computer programmers.  Their contributions were mostly overlooked by those in charge, including not being invited to a celebratory dinner. Abbate also explores how computers and programming became more “masculine” during the 1960s and the number of women in computing has declined since the mid-1980s. 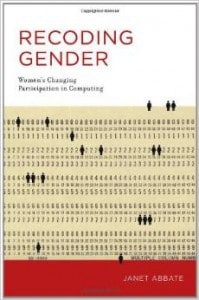 In Gender and computers: understanding the digital divide it is suggested that some of the features that have been added to current computer programs in order to “make learning fun,” may, in fact, be a reason that girls are more reluctant to go into computer science. Those features seem to be more in line with the way boys learn and process than they are with how girls often learn and process. Studies have found that, in general, when using computers to learn, boys prefer to learn with action games, flashing lights, loud noises and competition. Generally, girls prefer to use computers as a “learning tool” with direct and frequent feedback and with words, not noise and exploding icons. An example of a learning game directed more at males is Demolition Division.

There are, however, a number of women in the world of computer gaming. In 1979 Roberta Williams, the co-creator of Graphical Adventure Games and her husband, Ken, formed the company On-Line Systems (now called Sierra). Dona Bailey is the first woman to design an arcade game while she worked at Atari. Soon after the release of the arcade hit, Centipede, she disappeared from the gaming world, later admitting that it was the pressure and criticism from her male counterparts that drove her from the business. Amy Briggs is the creator of the first adventure games for girls. The first female – and the world’s oldest competitive gamer – is Doris Self. She entered the competitive gaming world in 1983 when she was 58.

We here at the University of Iowa are fortunate to have a Women in Science and Engineering (WISE) student organization on campus. WISE Ambassadors are undergraduate and graduate women in science, technology, engineering and math (STEM) majors. They organize K-12 and community outreach activities, plan professional development opportunities, and provide service to local organizations. Each year the WISE Ambassadors have organize a Science and Engineering Extravaganza for third through sixth grade girls, help with local science fairs. In 2014 the UI WISE organization donated a wide variety of resources to the Lichtenberger Engineering Library.  The donation includes books and DVDs. DVDs include NOVA and Frontline programming, the television series design|e2, and many others.

There is also an active Society of Women Engineers (SWE) chapter in the UI College of Engineering. They attend and network at conferences, and also have outreach events to help kids learn about engineering.

The most important women in the history of video games. 2015. about tech.

Women in history: mothers of invention – first women to file for American patents. 2015.  about money.

Women’s progress in science and engineering since 1973 (Infographic). June 11, 2015. livescience.

Why it’s crucial to get more women into science. November 8, 2014. National Geographic.

How many women inventors are there? 2015. about money.