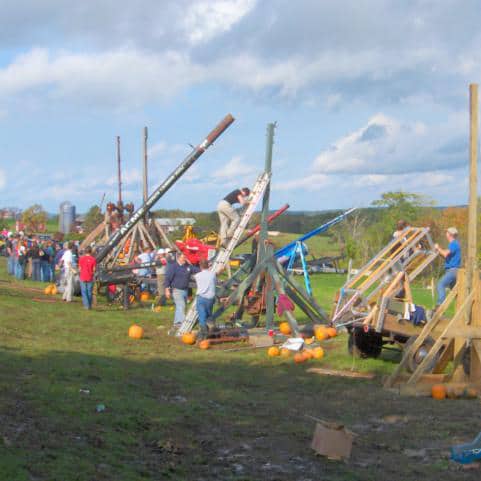 The days are getting cooler and Halloween is almost here!

Want to put your engineering skills to work and have fun doing it? How about making your own Punkin Chunkin trebuchet or catapult?

Most of us know what a catapult is, but do you know what is different between a catapult and a trebuchet?  A trebuchet uses a sling and has a counter-weight which, as it is dropped, forces the long arm up to pull the sling and the projectile along a slide at the base. The counter-weight uses the pull of gravity to provide the force necessary for the arm to swing upwards. The sling increases the length of the arm which increases the length of the throw. The catapult, on the other hand, uses a leaf spring mechanism to release the long arm. A rope is wrapped around a rotating drum and when the spring mechanism is released, so is the arm and the projectile. A catapult also has a cup at the end rather than the sling that a trebuchet has.

In 15 Dangerously Mad Projects for the Evil Genius, author Simon Monk says, “The trebuchet takes its energy from the weight that falls as the arm swings. The ‘potential’ energy is transferred to the arm and sling of the trebuchet and is released as kinetic energy in the tennis ball.” (or pumpkin…). He then explains that when you know the energy stored in the weight and how far the projectile can be thrown, then the energy going into the system and the energy released can be measured.  Input energy can be calculated using the formula: E=mgh where ‘m’ is the mass of the weight, ‘g’ is the gravitational acceleration on Earth (9.8) and ‘h’ is the height.  You can also calculate the amount of energy transferred to the tennis ball using the distance it traveled and its weight. E=1|2 mv2 where d=v2|g v2=dg. You can then calculate the efficiency of the catapult by dividing the energy transferred by the energy input.  From this, you are then able to calculate the efficiency of your trebuchet! Ready to try to build your own? Monk also provides step-by-step, illustrated instructions, including a list of parts needed! The trebuchet project is  rated as “Small,” (1/2 day to 1 day to complete) and the skill level receives 2 out of 4 stars (a small mount of soldering is required).

Rather make a catapult? Make : Technology on Your Time (volume 28, pages 84-94) will walk you through the process of building a gravity catapult. The larger the item you want to hurl through the air, the larger the catapult needs to be. Author William Gurstelle cautions that there are incredible stresses on the working parts of the catapult and if something should bend or break, it can be dangerous. He also emphasizes that a catapult is big. Once you build it, you need to have a place to store it (and to use it!) The gravity catapult shown in this issue of Make is small and light enough for one person to move. It also has wheels and (sort of) folds flat. Still want to try your hand? This includes an explanation of how it works, a list of materials and tools needed and complete building instructions accompanied by color illustrations!

If you don’t have the space to build a full-size catapult or trebuchet, how about making a smaller, desk-size version? Watch the video to learn to make a Mini Candy Launching Catapult!

Disclaimer: The Engineering Library does not condone the theft or destruction of personal property or harming anyone while punkin chunkin.