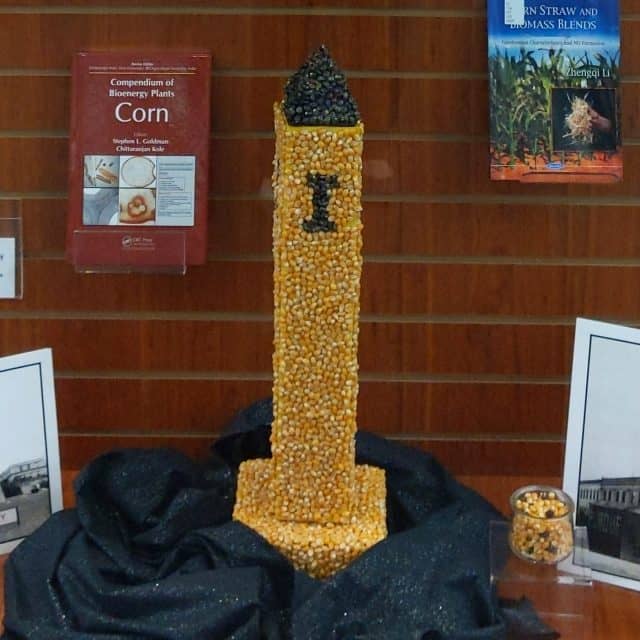 What would Homecoming be without the Corn Monument? The Corn Monument has been part of the Hawkeye Homecoming tradition off and on since 1913. Or 1914, depending on what you are reading! According to Irving Weber, Iowa City & University of Iowa Historian, the first homecoming was held in 1912 when the Hawkeyes played the University of Wisconsin.  It has also been said that the first homecoming football game was in 1910 with the University of Illinois.  Many of the resources list the first Corn Monument being constructed by a “class in hydraulics engineering” in 1914. However, according to a 1913 Daily Iowa article, Applied Sciences students, with help from B. J. Lambert, Professor of Structural Engineering, designed and built an arch that crossed the street in front of the engineering building that year. The arch said “Get Ames” and after UI won the “e” was changed to an “o” – “Got Ames!”

The Corn Monument tradition continued until the 1960s when interest waned. It came back again in 1981 and appeared sporadically until 2014. It’s been a constant since then. 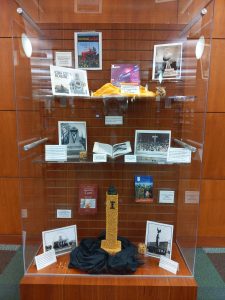 The University of Iowa’s Homecoming Week is full of rich traditions. The football game (did you  know that Herky was named after Hercules, the God of extraordinary strength?), the parade, the court of the King and Queen are all still part of the festivities in 2019. In past years there was also a “Dolphin Water Pageant.”

This year’s Corn Monument honors the 80th anniversary of Nile Kinnick’s Heisman Trophy win. He is the only Hawkeye to win the Heisman Trophy. His jersey number was #24 and was retired – only two numbers have been retired. When you are out celebrating homecoming this week, stop by the Corn Monument located on the west side of the Old Capital Building – and stop in to our library to check out our exhibit!