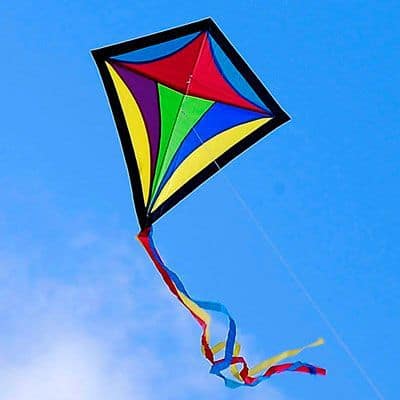 (from Disney’s Mary Poppins, composed by Richard M. Sherman and Robert B. Sherman)

Our new exhibit, Kites! Engineering and Design from Around the World! celebrates kites and all they have contributed to engineering and aeronautics.

The history of kite-flying goes way back – there are differing accounts of when the first written record appeared – varying from about 200 B.C.  to 1000 B.C.  Kites were not toys, but used for delivering messages, carrying lights, noise makers and pyrotechnics to frighten enemy troops. In the 200 B.C. account, Chinese General Han Hsin flew a kite over the walls of a city to determine how far his army would have to tunnel to reach beyond the city’s defenses. Kites were also used for various religious and ceremonial rites. The first known illustration of of the familiar diamond-shaped kite dates from 1618.

Pioneers of aviation used kites to research and test aircraft structures, aerodynamics, and wing designs.  Wilbur and Orville Wright used a specially designed kite to test their control systems. The company Syndicate d’Aviation was founded in 1905. It was first company founded specifically to manufacture airplanes. Their initial product was a two-bay biplane which was inspired by Lawrence Hargrave’s box kite. It is also believed that Leonardo da Vinci’s familiarity with kites led to his invention of the parachute.

So, why are kites, which are heavier than air, able to fly? They rely on lift, drag, thrust, and gravity. Lift results when wind moves across the sail of a kite – the wind pushes up on the kite. At the same time, the wind passing over the top of the kite creates an area of low pressure, which creates pull from behind. Drag is created by wind resistance on the kite’s surface and tail. Gravity and the weight of the kite pull it downwards and the thrust is the power of the wind which creates the lift. A kite needs enough lift to overcome the gravity and drag.

The dihedral angle of a kite is also important. A dihedral angle is the angle formed when two wings come together. If the wings of a kite lean back at the same angle, the wind will push evenly on both wings and it will be perfectly balanced in the sky.

There are many possible kite shapes and how each of them use their aerodynamic features determine if, or how, that kite will fly. In 1905 Alexander Graham Bell developed tetrahedral kites. The giant Frost King had 1,300 individual pyramid-shaped cells arranged in 12 layers and could lift a man 30 feet in the air. We have a smaller (much smaller!!) model of a tetrahedral kite in our exhibit.

Remember spending spring and summer afternoons trying to get those kites off the ground or out of ‘kite-eating-trees?’ What is more fun than a wide-open space, a light breeze and a colorful kite? Stop in and see our Kite Flying exhibit, let it get you into the mood and then head out for some spring kite-flying!

*The largest number of kites flown on a single line is 11,284.
*The smallest kite in the world is .19685 inches and the largest is 6781.26 square feet
*Some Japanese kites weigh over 2 tons
*More than 50 million kites are sold in North America each year
*Bird kites from Indonesia are made from hand-painted silk
*Traditional kites of Thailand represent male and female characters. Kites are flown in “battles” designed to capture a mate
*A young boy, Homan J. Walsh, flew his kite over Niagara Falls helping to build the suspension bridge.
*Kite names from around the world:

For the calculation of the lift and drag on a glider being flown as a kite:
Anderson, John David. 1997.
A history of aerodynamics and its impact on flying machines. Cambridge : New York : Cambridge University Press. Engineering Library TL570 .A679 1997  Appendix F, page 458.