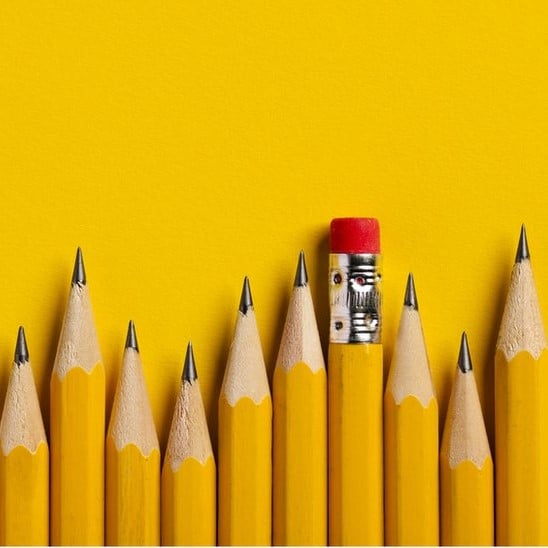 I bet you don’t think much about the pencil when you think about picking it up and getting to work. Probably when it needs to be sharpened or when the mechanical pencil needs more lead, but most of us don’t think of the pencil often. It just is there. It just “is.” 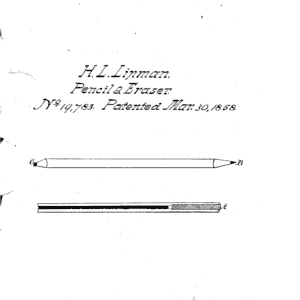 The pencil, as we know it, has a fascinating history, dating back to the early 16th century! So why would March 30th be National Pencil Day? March 30, 1858 was the date when Hymen Lipman received the first patent for attaching an eraser to the end of a pencil!

Back in the 16th century a storm in Cumberland uprooted a large tree exposing a black, gooey substance in Borrowdale near Kewsick. The substance was actually graphite and the nearby farmers used it to mark their sheep. That soon developed into sticks of graphite being wrapped in string so the fingers wouldn’t get so dirty. That developed into a casing that would hold the graphite – a predecessor to what we know of as the mechanical pencil. Sometime in the 16th century the pencil, much as we know it, was born. Graphite wasn’t exported so that area became the world-wide center of pencil manufacturing. The graphite in that area was the only known source of high-quality graphite so it was highly guarded and sold for large sums at auctions.

I won’t go into long detail, but when France declared war on Great Britain in 1793, they needed to come up with an alternative to the pencils made in Great Britain.  So Nicolas-Jacques Conté was tasked with developing a pencil which did not require imported materials. He came up with mixing graphite powder with clay to produce fine rods which were fired in a kiln. It was patented by Conté in 1795 and is still the process by which pencils are made today.

After many iterations the Dixon Ticonderoga Company claimed to make “the world’s best pencil.” The Ticonderoga #2 pencil  is the familiar yellow pencil with the yellow and green ferrule (the metal sleeve holding the eraser in place). Chances you have one on your desk.

Little known fact: “[…] the pencil does have a dark side – George Lucas apparently used a Dixon Ticonderoga when he working on the first draft of the screenplay for Star Wars Episode I: The Phantom Menace, and so the pencil is, at least in part, responsible for Jar Jar Binks.” At least that is what James Ward, author  of The Perfection of the Paper Clip: Curious Tales of Invention, Accidental Genius, and Stationery Obsession, claims on page 96.

Stationery Fever: From Paper Clips to Pencils and Everything in Between author John Z. Komurki claims the Eberhard Faber Blackwing 602 is the “[…most gorgeous pencil the world has every seen […]”. It is a hexagonal pencil made with the unique mixture of wax, graphite and clay used in the lead. Because of that special mixture it claimed ‘half the pressure, twice the speed.’ The Blackwing was reportedly used by John Steinbeck, Truman Capote, Chuck Jones, Stephen Sondheim, and Eugene O’Neill, to name a few!

The history of pencils is fascinating and includes a book, How to Sharpen Pencils. Stationery Fever has a chapter devoted to pencil sharpening!

Here are interesting facts about “notable pencil users” from the National Day Calendar.

Here are 20 things about pencils that you probably don’t know! (Including are they poisonous? Can they be used as a weapon?)

1. There is no risk of lead poisoning if you stab yourself (or someone else) with a pencil because it contains no lead — just a mixture of clay and graphite. Still, pencil wounds carry a risk of infection for the stabees, lawsuits for stabbers.

2. And bad juju for anyone linked to Watergate: In his autobiography, G. Gordon Liddy describes finding John Dean (whom he despised for “disloyalty”) alone in a room. Spotting sharpened pencils on a desk, Liddy fleetingly considered driving one into Dean’s throat.

3. Graphite, a crystallized form of carbon, was discovered near Keswick, England, in the mid-16th century. An 18th-century German chemist, A. G. Werner, named it, sensibly enough, from the Greek graphein, “to write.”

4. The word “pencil” derives from the Latin penicillus, meaning — not so sensibly — “little tail.”

5. Pencil marks are made when tiny graphite flecks, often just thousandths of an inch wide, stick to the fibers that make up paper.

6. Got time to kill? The average pencil holds enough graphite to draw a line about 35 miles long or to write roughly 45,000 words. History does not record anyone testing this statistic.

7. The Greek poet Philip of Thessaloníki wrote of leaden writing instruments in the first century B.C., but the modern pencil, as described by Swiss naturalist Conrad Gesner, dates only to 1565.

9. French researchers also hit on the idea of using caoutchouc, a vegetable gum now known as rubber, to erase pencil marks. Until then, writers removed mistakes with bread crumbs. 10. Most pencils sold in America today have eraser tips, while those sold in Europe usually have none. Are Europeans more confident scribblers?
11  Henry David Thoreau — American, but a confident scribbler all the same — used pencils to write Walden. And he probably got them free. His father owned a pencil-making business near Boston, where Henry allegedly designed his own pencils before becoming a semi-recluse.12. In 1861, Eberhard Faber built the first American mass-production pencil factory in New York City.13. Pencils were among the basic equipment issued to Union soldiers during the Civil War.

14. The mechanical pencil was patented in 1822. The company founded by its British developers prospered until 1941, when the factory was bombed, presumably by pencil-hating Nazis.

15. Je suis un crayon rouge. After the 1917 Soviet revolution, American entrepreneur Armand Hammer was awarded a monopoly for pencil manufacturing in the USSR.

16. More than half of all pencils come from China. In 2004, factories there turned out 10 billion pencils, enough to circle the earth more than 40 times.

17. Pencils can write in zero gravity and so were used on early American and Russian space missions — even though NASA engineers worried about the flammability of wood pencils in a pure-oxygen atmosphere, not to mention the menace of floating bits of graphite.

18. Those concerns inspired Paul Fisher to develop the pressurized Fisher Space Pen in 1965. After the Apollo 1 fire, NASA banned pencils in favor of his pen on manned spaceflights.

19. The world’s largest pencil is a Castell 9000, on display at the manufacturer’s plant near Kuala Lumpur. Made of Malaysian wood and polymer, it stands 65 feet high.

20. At the other extreme, engineers at the University of California at Santa Barbara have used an atomic force microscope as a kind of pencil to draw lines 50 nanometers (two millionths of an inch) wide. Just because they could.

I hope you next time you pick up a pencil you’ll think of some of the history behind the development of today’s pencil!

A Visual History of the Pencil. The Museum of Everyday Life. Date Accessed, March 30, 2021 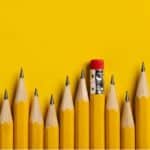