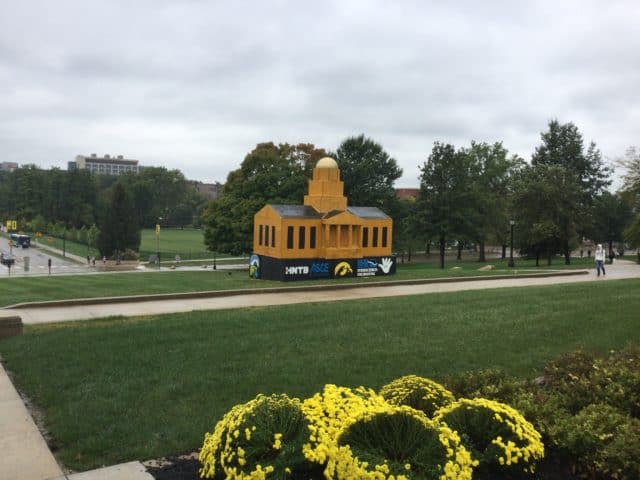 Happy homecoming to all – current students and alumni near and far! One of the College of Engineering’s most creative homecoming traditions is the Corn Monument. The state of Iowa is the top corn producer in the country, so what better way to celebrate than to celebrate with corn?

Engineers have showed their support for the football team with things other than corn. In 1919, they upstaged their obelisk monument on the Pentacrest with an electric sign. In preparation for the homecoming game against Iowa State, they created 15-foot tall electric sign that read “Soak Um Iowa” and placed it on top of the physics building (also known as MacLean Hall). The sign featured around 200 light bulbs and would have been very visible from Iowa Field, located only a block away near the river. No pictures of the sign seem to have survived, but in 1920 they created a similar sign for the homecoming game against Minnesota that read “Iowa Who Wah.”

A common motif for these monuments is an obelisk or a big “I,” but some unique designs have been taken. For example, this rocket monument from 1952, the design of which was  submitted by dental student Duane Schmidt.

If the Hawks won, the monument would be burned in celebration. Here is a photo of the 1952 monument on fire after the Hawks beat the Buckeyes 8-0. For many reasons (including public safety) his tradition has been abandoned.

The corn monument was popular through the 60’s, but as with many traditions, interest waned and no one took the initiative. Corn monuments reappeared in 1981 and have been present on and off since. After being gone for two years, the corn monument is back for 2021! This year we have what is believed to be one the biggest corn monuments – a replica of the Old Capitol that stands 25 feet tall. It’s just across the street on the Pentacrest. See it today in between classes or while visiting your old stomping grounds, and Go Hawks!