The world today would be a very different place without the inventions of Thomas A. Edison.  He was known as the Wizard of Menlo Park.

His research provided notable contributions to telegraphy, telephony, sound recording, electronic lighting, electric power generation and distribution, and the motion picture. (2) Edison’s first invention, in 1869, was an electric vote-recorder.  It was to allow Washington congressmen to vote “yes” or “no” but they were not interested so the invention proved unsuccessful.  (http://www.google.com/patents/US90646) 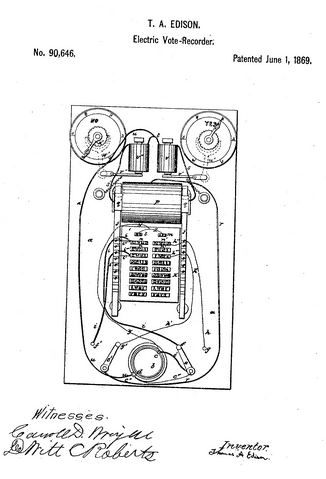 Other notable inventions include: (3)

STENCIL PEN: The stencil pen was the predecessor to tattoo pens. FRUIT PRESERVER: Edison designed a fruit preserver that sucked the oxygen out of the glass jars, producing vacuum-sealed jars of fruit. KINETOGRAPHIC CAMERA: The camera showed successive photos in a rapid speed so as to make them appear to be moving. A complete listing of all of Thomas A. Edison’s 1,093 patents:  http://edison.rutgers.edu/patents.htm

In addition to the patents issues in the United States, Edison also was issued 1239 patents by foreign governments. (4)