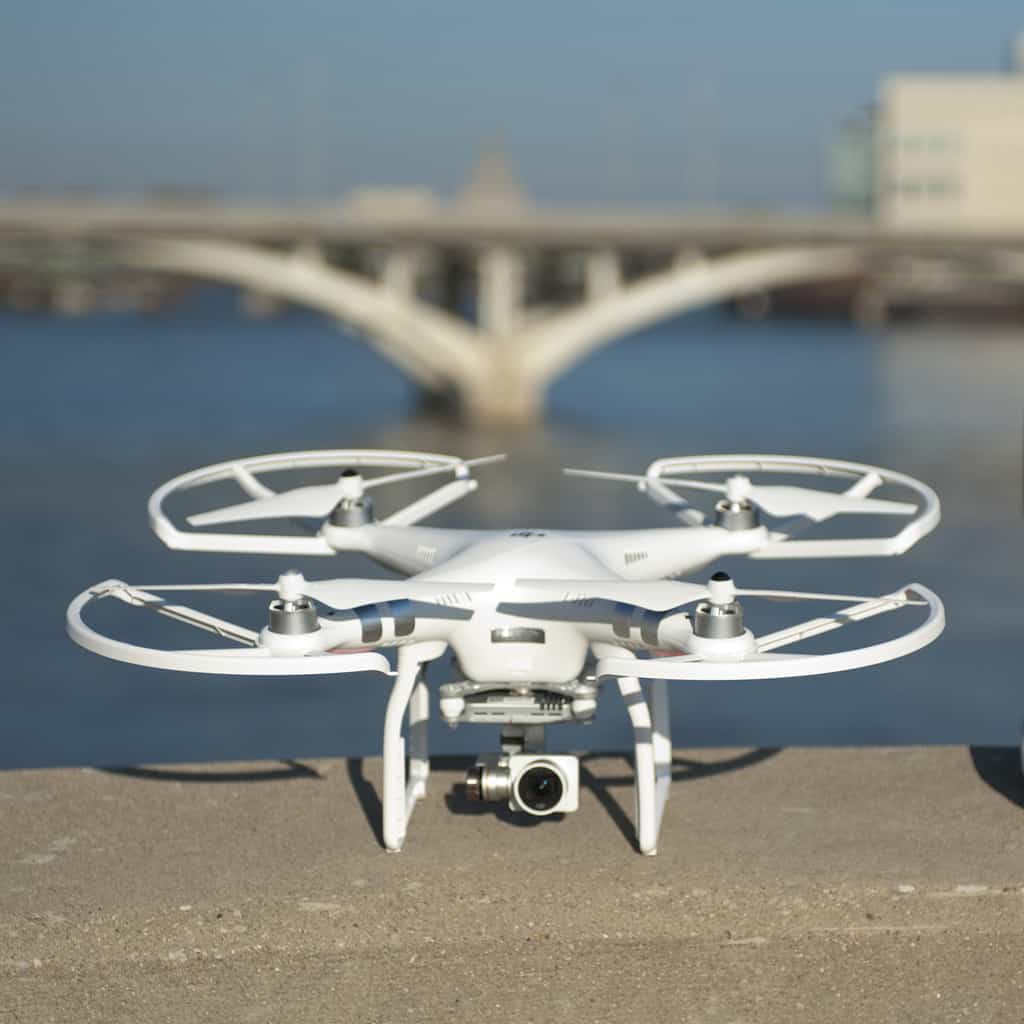 Interested in learning more about drones? Ever thought about building your own? We have the resources you need!

The best place to start might be understanding what a drone is. Dictionary.com defines a drone as “an unmanned aircraft or ship that can navigate autonomously, without human control or beyond the line of sight.” “Unmanned” is the term usually applied to drones, however, the term “uncrewed” has long been used by NASA, is gender-neutral, and thus is the term I will use whenever possible.

In the book Make: Getting Started with Drones, authors Terry Kilby and Belinda Kilby differentiate between types of uncrewed aircraft. For instance, a Remotely Piloted Aircraft (RPA), refers to model aircraft flown by a pilot on the ground using a radio transmitter. A UAV (uncrewed aerial vehicle) is an aircraft which is flown remotely or controlled autonomously using computer software and GPS. Uncrewed aerial systems (UAS or sUAS for a small UAS) refers to all related processes involved with uncrewed aerial technology.

The University of Iowa UAS Advisory Group says, “A UAS consists of an uncrewed/unmanned aerial vehicle (UAV) and the components necessary to operate and control the UAV. UAS are often referred to as drones. According to the FAA, a UAS is the uncrewed/unmanned aircraft and all of the associated support equipment, control station, data links, telemetry, communications and navigation equipment, etc., necessary to operate the unmanned aircraft….”

Now that we have a basic understanding of what a drone is, what’s next in learning to build your own? Both Make: Getting Started with Drones and DIY Drones for the Evil Genius begin with a brief history of flight and some basic principles of aeronautics. Understanding basic principles and the 4 physical forces involved in flight – thrust, drag, weight and lift – will help you design and build your own drone!

Ian Cinnamon, author of DIY Drones for the Evil Genius, recommends purchasing the small (fits in the palm of your hand), inexpensive ($15 or $25 with a simple camera) Cheerson CX-10 to learn and practice flying a drone – before designing and building your own. Basic flight instructions are included (with graphics), AND there are instructions on how to learn to flip your drone! Ready to build your own, from-scratch, not-from-a-kit drone? Cinnamon takes you through the process from the beginning (deciding what your drone will be used for – racing? photography?) to attaching LED lights and a radio-controlled switch for night flying! (Check out this review & flight of the Cheerson CX-10 on youtube!)

Interested in using your drone for search and rescue (SAR)? Make : Technology on  Your Time (issue 51) has a section on amateur drone pilots (that could be you!) and SAR volunteering. Information on how to volunteer, what gear you need, how to prep – and do’s and don’ts are all included. There is also information about Search With Aerial RC MultiRotor (SWARM), an organization where volunteer pilots can register to participate in SAR.

If you feel creative when designing your drone, you could have a Death Star….

Okay – you are now ready to fly your drone! What else do you need to know? Laws, rules, and regulations!

The Federal Aviation Administration (FAA) website is a wealth of information about getting started, where to fly, resources and FAQs. There is also information about registering regulations, including a link to register your drone online. For example, if your drone weighs between .55 pounds and 55 pounds (25o grams to 25 kg) you will need to register. There are both civil and criminal penalties if you meet the criteria and do not register.

In addition to federal laws, you will need to check the laws for the state in which you plan to fly. A quick state-by-state guide can be found here. This website is current (2017) and at this point in time, Iowa has no drone laws which extend beyond the federal laws.

There may also be rules and regulations on drone use in localized areas. The University of Iowa’s UAS Advisory Committee has implemented a policy on drone use.  The new policy applies to faculty, staff, and students – and any UAS which are operated by others on campus. There is a campus-wide “no fly zone” without prior permission. Among other things, it addresses privacy concerns, insurance and liability. It does allow drone usage for research, education, marketing, facilities management, and data collection. Be sure to check out the UI policy if you want to fly your new drone on campus!

If you’d like to learn more about how drones are used in military, civil, and disaster relief, check our many resources. Domesticating Drones covers covers commercial uses (package delivery, movie production, agricultural applications, etc.),  uses in emergencies, and regulations in the United States and around the world. There is even a chapter on starting a drone business. Civil and Commercial Unmanned Aircraft Systems discusses how drones may be used in forest and ecological ways (i.e. forest fires), law enforcement and public safety uses, research, journalism, and more.

Military Robots and Drones provides background and history of using drones in military actions. It also looks at problems and controversies surrounding their use – including a worldwide perspective. Killing By Remote Control: the Ethics of an Unmanned Military lays out pros and cons of using drones in warfare and explores the moral and ethical implications that follow that decision.

Build a drone this summer! Be creative and DIY your own design! We have the resources to help you be successful! Happy Flying!

Use of Drones or Uncrewed Aerial Systems (UAS). University of Iowa Office of Research and Economic Development. Date Accessed: May 24, 2017