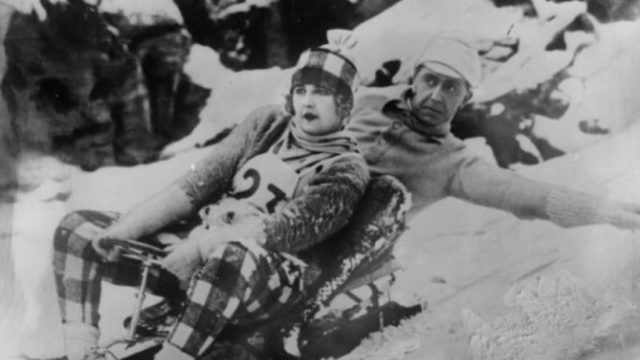 You’re almost done with the semester, and soon you’ll have time to go outside and enjoy the snow. Have you ever thought about the history of sleds?

Sleds have a very long history, helping us to work and play. You may have spent your snow days gliding downhill on a plastic saucer or an innertube style sled. The story of the Flexible Flyer is one of engineering, redesigning, and risk.

Samuel Leeds Allen loved winter activities. From “coasting” (the term used for downhill sledding in the Victorian  era), to ice skating, it was difficult to keep him inside during the Philadelphia winter. During his childhood, toboggans were the most common version of a sled. Having no runners or brakes, riders had to dig a heel into the snow to turn or stop. He was also a tinkerer from a young age. His mother was quoted as saying “I never saw anyone with such perseverance. He never seemed to give up on an idea.” Allen’s teachers believed him to be lazy because he didn’t engage well with the lessons, preferring experiential learning over rote learning.

After leaving school, Allen moved to live with a relative on a farm in New Jersey. It was there that he started making improvements to farming implements. Eventually he created his own company, S.L. Allen & Co., which made seeders, hoes, plows, harrows, corn shellers, feed grinders, and lawn mowers, among other things. He worked hard to cultivate relationships with buyers, and utilized advertisements in existing publications as well as creating his own. Allen also thrived because of patents and the protection of intellectual property they provided.

While enjoying sledding with his daughters, Allen’s mind turned to improving the experience. His daughter remembers having to sled down hills again and again and reporting every thought about the ride. Eventually, he would patent his first sled in 1887 called the “Fairy Coaster.” It was large enough to hold three riders on its padded seat, and was steerable with a braking system. However, at $50, the price point was out of reach for most consumers. It was an absolute failure.

Allen learned from this episode, and worked to improve his design. In 1889 he would be awarded his second patent, this time known as the Flexible Flyer. Again, it looked like the product would be a failure. For several years, Allen’s sled would again fail to sell significant numbers. It wasn’t until people started getting more free time in the mid 1890’s that they had time to enjoy sledding. By 1910, the Flexible Flyer would become the most popular brand, with distinctive branding and features. You can even get your own Flexible Flyer today!

Maybe your winter plans include more tropical climates – you can still sled! Did you know that some of the first sleds were used on wet sand? There is evidence that the Ancient Egyptians used sleds to efficiently move large blocks of stone. I’m sure you could also take a snow saucer down a sand dune.

The native peoples of Hawaii also have their own version of sledding, called hee holua, or “sled riding.” 12-foot long wooden sleds are ridden down a kahua holua (sledding course), which is made out of lava-gravel. Riders usually ride the sled lying down face first, standing up, or kneeling. Speeds can reach 50-80 miles per hour!

Sleds are also helpful tools to move across flat snow-covered land, but you’ll need some extra power. Dogsledding is one method, utilizing special breeds of dogs who have strong legs and thick coats. Today most of us are most familiar with the Iditarod, a race between Anchorage to Nome, a distance of 938 miles that typically takes 8 to 15 days. This race commemorates the “Great Race of Mercy,” a rush to get diphtheria antitoxin to an ice-bound Nome in the winter of 1925. The serum was transported by relay, and most of the dogs in the original effort ran an average of 31 miles.

If you don’t have a team of dogs, you can simply kick yourself to your destination. Resembling dogsleds, kicksleds are found in Northern Europe, and work exactly how you think they would. The user stands on the back, and simply kicks to create forward momentum. They were most popular in the mid-2oth century, but you may see some around if you visit during kicksledding weather. Because the runners are very narrow (think ice-skates), they work best on ice or very hard snow.

What do you think now? Will you be sledding this winter? Share your tips and tricks with us below!

Green, A. (2013, December 24). A Brief History of the Sled. Popular Mechanics. https://www.popularmechanics.com/adventure/sports/g1377/a-brief-history-of-the-sled/

McCarthy, E. (2012, December 28). 25 Things You Might Not Know About Sledding. Mental Floss. https://www.mentalfloss.com/article/32044/25-things-you-might-not-know-about-sledding

A short history of the kick sled. (2010, February 1). The Accidental Hermit. https://theaccidentalhermit.blogspot.com/2010/02/short-history-of-kick-sled.html