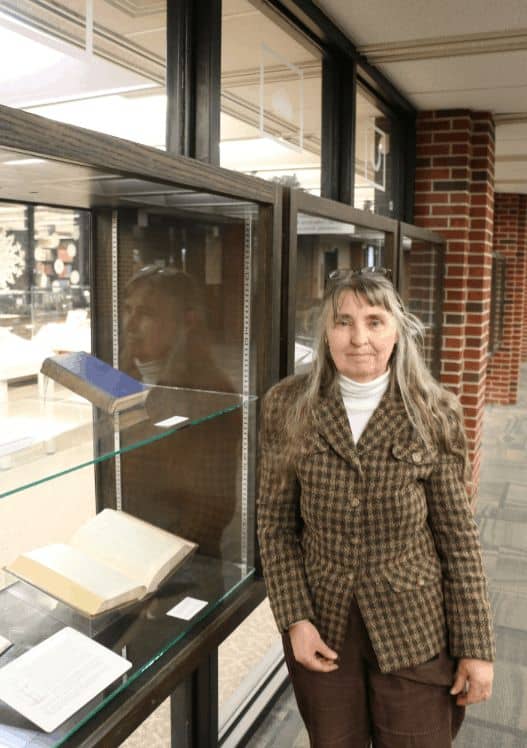 In the darkness of these Midwest winter months, a new exhibit comes to our reading room to shed light on nine nearly forgotten Iowa women writers.

Lanterns in Their Hands: Nine Nearly Forgotten Iowa Women Writers was curated by Processing Coordinator, Jacque Roethler. The exhibit examines nine women writers whose names may have faded with time, but whose work continues to resonate with readers today. While a majority of the exhibit features the books written by these women, there are also manuscripts, photographs, end paper design, periodical appearances, and a few other ephemera pieces that accompany a brief biography written by Roethler.

Retiring this February, this exhibit is Roethler’s encore to showcase some of her favorite material found in Special Collections.

“What got me to the idea of doing an exhibit on nearly-forgotten Iowa women writers,” explained Roethler, ” was the book, The Plough on the Hills by Merriam Gearhart. I came across it in the Iowa Authors section one day. Here was a woman who lived in Iowa all her life and she created these poems, not sublime, but beautiful in their own right.  And I, who had lived most of my life in Iowa,  and majored in English here, had never heard of her. And I thought, ‘How sad that she’s sliding into oblivion.’ I remembered seeing books by Grace Hebard and Mary Winchell, and I hadn’t heard of them, either. I started looking and there were others like her. Women like Amy Clampitt, who worked in New York all her life, most of it in the publishing industry when suddenly, when she was 63, people began to take notice of her. She became popular – she had many poems in the New Yorker, which is the top of the heap. Then she was gone, and I hadn’t heard of her either. In fact, the only Iowa woman writer I knew about before coming to work in Special Collections was Ruth Suckow.”

As Roethler mentioned above, she was an English major here at the University of Iowa, which might explain why she has consistently been drawn to the papers of authors and poets while working here in Special Collections. Before getting to Special Collections, however, she worked at the University of Iowa’s hospital cafeteria, served as a the secretary for the African American studies department for ten years, and after getting her master’s in Library and Information Science in 1995, started working for the UI Libraries in the serials department and math library before finally coming to Special Collections. While Roethler has worked diligently on large collections like the Gallup Organization’s records and the Ken Friedman papers, some of her favorite collections to process have been those of authors like Lewis Turco, who wrote The Book of Forms, or John Gawsworth whose Georgian poetry, according to Roethler, wasn’t appreciated in his time. Working on these collections and completing their finding aids has clearly helped hone Roethler’s ability to find the remarkable in the often overlooked.

“I found so many things when I put the exhibit together,” explained Roethler. “The fact that Bess Streeter Aldrich had won an O Henry Prize; that three of Dorothy Johnson’s short stories had been turned into films, all of which I HAD heard of…  that straight-laced Octave Thanet may have had a lesbian relationship with her long-time companion; that Josephine Herbst knew Hemingway well enough to write the extraordinary letter that appears in the exhibit and that that letter is probably to Katherine Ann Porter, with whom Herbst was very close; that Eleanor Saltzman died in a sanitarium operated by her cousin.” The fascinating stories of these women go on and on.

For Roethler, she wants people to know that this exhibit is just the tip of the iceberg. Narrowing down to just nine writers was a difficult task, having to exclude Susan Glaspell, Katinka Loesser, Actea Duncan, and so many more.

“I want people to seek out these writers–to help them not slide into oblivion,” stated Roethler. “I think that’s one of the main jobs of any Special Collections.”