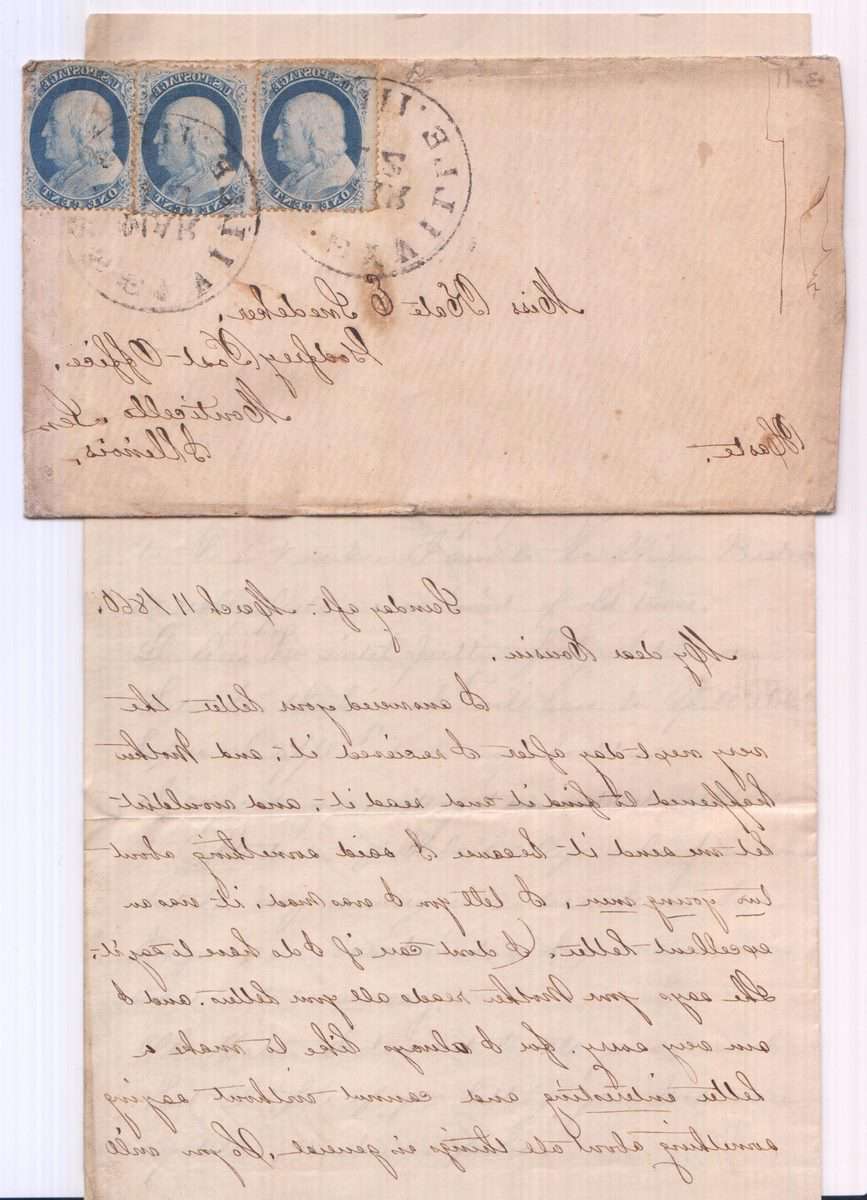 The Iowa Women’s Archives is turning 25! As a part of our celebration, we’re presenting an exhibit, 25 Collections for 25 Years: Selections from the Iowa Women’s Archives, in the Main Library Gallery. Through December 29th, visitors to the library can see selections from a wide array of our collections accompanied by comments from researchers who have used them. Although these comments were edited for the exhibit, we’ll be posting them in full right here on our blog for the rest of the year!

For our first post, we’ll be looking at the Catherine Snedeker Hill Papers, one of the oldest collections in the Iowa Women’s Archives (IWA). Before Snedeker Hill moved to Mt. Pleasant, Iowa in 1870, she attended the Monticello Female Seminary in Monticello, Illinois. Her letters home provide a look into her daily life during the Civil War era.

This was the first collection I worked with at the IWA.  I was a new graduate student and visiting the archive was part of an assignment for Leslie Schwalm’s 19th Century U.S. Race and Gender course.
I selected this collection because it is one of the earliest in the archive. Although the collection goes beyond her school days, I was initially interested in the education of an antebellum woman from the Midwest.  Instead of being sent ‘back East’ to be educated, Catherine Snedeker attended the Monticello Female Seminary in Illinois.  The Snedeker Hill papers include a large number of letters written to Catherine while she was attending school.  Her senior year at Monticello was 1862, which coincided with the Civil War.  It is particularly interesting to see the Civil War through the eyes of a young woman and her family, away from the conflict.

One of the things that has made this collection so memorable to me is the chance to see Catherine’s life through that liminal time between being a schoolgirl and being a wife and mother.  For Catherine Snedeker that liminal moment spanned almost a decade.  For me, it clarified the tenuous position many young women were in—those that left school with no defined role for themselves.

I feel fortunate to have used the Archives as both a student and as an instructor.  I used a few collections (unfortunately, not the Catherine Snedeker Hill Papers) in my dissertation.   My students in two different classes wrote their final papers from collections found in the IWA.  It was exciting to see them work with archival material for the first time.  I believe that this project not only introduced them to the practical skills of the historian, but also important critical thinking skills, as they constructed an argument from the various letters, diaries, photographs and other artifacts they encountered. 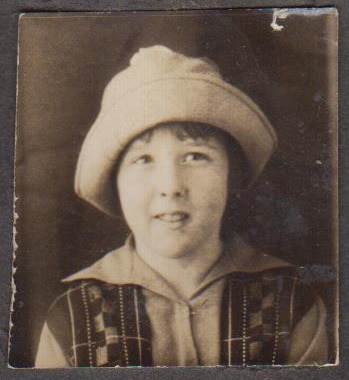 “Schöner Bruder,” “Ma Chère Petite,” “Sonny Boy,” Honey Child,” these are just a few of the salutations used by Dorothy and Warren “Jack” Wirtz in their letters to each other. Although their greetings may have been somewhat tongue in cheek, Dorothy and Jack’s correspondence reveals a relationship full of common interests, good humor, and affection. What helps make this so immediately apparent is that Wirtz kept her family correspondence separate from the rest. Additionally, she transcribed over 1000 pages of it, ensuring its legibility. In fact, the order of and attention Dorothy paid to her correspondence gives insight into how she prioritized her relationships and organized her life.

When I began to process this collection, I conducted a quick survey of its boxes and determined that Wirtz’s correspondence and diaries comprised over half of it. Normally, processing these portions of collections for use would involve a straightforward, chronological order. But, Wirtz was a little more complicated than that. She kept letters from her parents and her brother separate from her letters from friends and colleagues, and kept correspondence with students in a box on its own. Additionally, she kept postcards from her family distinct from all other correspondence.

Although the original letters remained, Wirtz also transcribed many of them, occasionally editorializing. After Jack’s “Hello. Hawaii?” she explained, “This must have been a greeting heard frequently on radio.” In a 1934 letter she had written to her brother about the notorious bank robber Pretty Boy Floyd, “At last you are in no immediate danger. ‘Pretty

Boy’ Floyd has been killed.” Next to her transcription of that letter she wrote in red pen “Mother worried about him being at large while Jack hitchhiked to various places.”

Recognizing Wirtz’s arrangement of her letters as intentional, I chose not reorganize them, but instead followed the archival principle of original order. Except in cases where letters are misfiled, I maintained Wirtz’s order rather than imposing an artificial one. Not only is this simpler for me as a processor, but it gives future researchers the benefit of seeing Wirtz’s correspondence as she did, with the spheres of her life distinct from each other. Dr. Wirtz, professor of French is stern, incisive, and businesslike. But the letters of “Dot” to her family are more playful. It’s a delight to see her brother play right along without interruption. The siblings sprinkled their letters with French and German, closed them with phrases like “all agog” and “d’amour,” and generally infused their prose with a mock formality.

“Would it derange you at all if we drop in on Sunday?” Dorothy asked her brother one September while he was living in Grinnell.

“Derange me?” he responded the next day, “Why I should say not. I’ll be tickled to have you come.”

Born one year apart, the siblings were as close in age as they were in everything else. Both pursued higher education, wrote poetry, spoke multiple languages, and traveled abroad. Dorothy outlived her brother by over 40 years. But you can conjure up parts of their relationship by traversing their correspondence, just as Dorothy might have each time she sat down to transcribe one of their letters.

This post, by Christina Jensen, appeared on the Iowa Women’s Archives Tumblr this summer, and has since been featured on NBC news.

On June 28th, 1914, Austro-Hungarian Archduke Franz Ferdinand was assassinated in Sarajevo by Yugoslav nationalist Gavrilo Princip. One month later, war broke out across Europe between two alliance systems. Britain, France, Russia, and Italy comprised the Allied powers. Germany, Austria-Hungary, and the Ottoman Empire constituted the Central powers. As war raged abroad, the U.S. wrestled with the politics of neutrality and intervention. In April of 1917, President Wilson was granted a declaration of war by Congress. The United States thus officially entered the conflict alongside Allied forces.

To mark the occasion of the World War I centennial, we’re remembering Iowa women whose lives were shaped by the war.

One such woman was Clayton-native Louise Marie Liers (1887-1983), an obstetrics nurse who enrolled in the Red Cross and served in France as an Army nurse.

Before her deployment, however, Liers was required by the American Red Cross to submit three letters “vouching for her loyalty as an American citizen.” All nurses, regardless of nationality, were similarly required to provide three non-familial references testifying to this effect. While questions of loyalty and subversion are exacerbated in any war, America’s domestic front was rife with tension driven by geography, class, and ethnicity that raised fears and stoked national debate in the years leading up to America’s engagement in the Great War.

Arriving in 1918, Liers was stationed in the French town of Nevers where she treated wounded soldiers.  During this time Liers wrote numerous letters home to her parents and brother describing her duties and conditions of life during the war.

In a letter to her brother, featured below, Liers described her journey to France from New York City, with stops in Liverpool and Southampton.

When Liers arrived in 1918, Nevers was only a few hours away from the Allied offensive line of the Western Front.  She was assigned to a camp that served patients with serious injuries and those who required long-term care.  Liers noted in a 1970 interview that, by the end of the war, as fewer patients with battle wounds arrived, her camp began to see patients with the “Asian flu,” also known as the 1918 influenza outbreak that infected 500 million people across the world by the end of the war.

In letters home, and in interviews given later, Liers described pleasant memories from her time in service, including pooling sugar rations with fellow nurses to make fudge for patients.  Nurses could apply for passes to leave camp and Liers was thus able to visit both Paris and Cannes.  In an interview Liers recalled that, serendipitously, she had requested in advance a leave-pass to travel into town for the 11th of November, 1918. To her surprise, that date turned out to be Armistice Day, and she was able to celebrate the end of the war with the citizens of Nevers.

“…devised such tortures and called it warfare…”

Along with her cheerier memories, however, Liers’s papers also describe the difficulties of caregiving during war.  She described Nevers as a town “stripped of younger people” due to the great number of deaths accrued in the four years of war.  In later interviews Liers offered many accounts of the grim surroundings medical staff worked under, from cramped and poorly equipped conditions, to unhygienic supplies, such as bandages washed by locals in nearby rivers, which she remembered as “utterly ridiculous from a sanitary standpoint…they were these awful dressings. They weren’t even sterilized, there wasn’t time.”  Due to the harsh conditions and limited resources, nurses and doctors gained practical knowledge in the field. Liers recalled frustrating battles to treat maggot-infected wounds before the nurses realized that the maggots, in fact, were sometimes the best option to keep wounds clean from infection in a field hospital.

On a grimmer note, Liers wrote to her parents the following:

“As I have told you before, the boys are wonderful- very helpful. When I see their horrible wounds or worse still their mustard gas burns or the gassed patients who will never again be able to do a whole days work- I lose every spark of sympathy for the beast who devised such tortures and called it warfare- last we were in Moulins when a train of children from the devastated districts came down-burned and gassed- and that was the most pitiful sight of all.”

By the time the “final drive” was in motion, Base Hospital No. 14 was filled with patients to nearly double capacity, and doctors and nurses had to work by candlelight or single light bulb. Liers’ wartime service and reflections suggest a range of emotions and experiences had by women thrust into a brutal war, remembered for its different methods of warfare, inventive machinery, and attacks on civilian populations.

Liers worked in France until 1920, and her correspondence with friends and family marks the change in routine brought on by the end of the war.  With more freedom to travel, Liers and friends toured throughout France, and like countless visitors before and after, Liers describes how enchanted she became with the country, from the excitement of Paris to the rural beauty of Provence.

Following the war, Liers returned to private practice in Chicago, and later Elkader, where she was regarded as a local institution unto herself, attending over 7,000 births by 1949.  She was beloved by her local community, which gifted her a new car in 1950 as a sign of gratitude upon her retirement.

A list of collections related to Iowa women and war can be found here.