Ninety-nine years ago on March 7, 1916, BMW was officially incorporated. Originally launched to make aircraft engines for Kaiser Wilhelm’s war machine during World War I, the company switched to making motorcycles in the 1920s and started producing cars in the 1930s. The first plant outside of Germany, located in Spartanburg, South Carolina, wasn’t built until 1992. BMW stands for Bayerische Motoren Werke or Bavarian Motor Works. It has often been said, however, that BMW stands for “Beauty. Money. Wealth.” And, BMW advertising executives have said that BMWs are meant to convey “unpretentious exclusivity.” They are also considered to be “the ultimate driving machine.”

If you aren’t quite ready to head out and put a new BMW in your garage, you can dream while paging through The BMW Book.  It is 303 pages of full-color photos of BMW vehicles. It is also packed with information about everything from motorsports, motorcycles, Heritage and Icon BMWs from the past, to the concept vehicles of the future. BMW has two electric cars on the market right now: the BMW i3 and the BMW i8. 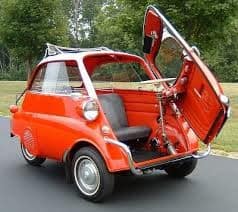 One of the Heritage BMWs you’ll see in The BMW Book is the Isetta. The Italian firm, Iso SpA, which was known for building refrigerators, motor scooters and small three-wheeled trucks expanded in 1952 and built the Isetta, a small, egg-shaped car. BMW bought the license and the complete body tooling from Iso SpA, and then made the Isetta its own, re-engineering much of the car. The first BMW Isetta appeared in April 1955. That same year it became the top-selling single-cylinder car in the world. The “bubble car” had a single seat for driver and passenger and a front mounted door. The heater was optional and, in the event of a crash, the driver and passenger were expected to exit through the canvas sun roof.

Check out this youtube video to see an Isetta in action!

Want to go inside a BMW factory and see how the”ultimate driving machines” are manufactured?
Check out National Geographic’s Ultimate Factories Collection on DVD. You’ll be able to witness first-hand what it takes to build the powerful, high-performance cars and motorcycles. This 4-disc collection, available in the Engineering Library, will take you behind-the-scenes of many different types of factories, including factories for fire trucks, M-1 Tanks, Budweiser and others.

BMW doesn’t just build cars that look great on the highway or in your driveway. They are expanding their line of cars within the BMW Sports Trophy Customer Racing program – this line is said to have “strong motorsport genes.” The BMW M4 DTM race car is a strong contender in the DTM racing circuit (Deutsche Tourenwagen Masters) which is considered by some to be some of the highest GT racing in the world.  BMW motorcycles have been winning championships since 1924 and have included, among others, sidecar racing (17 championship titles in a 20-year span), nine consecutive German championships, and the the US Superbike Championship.