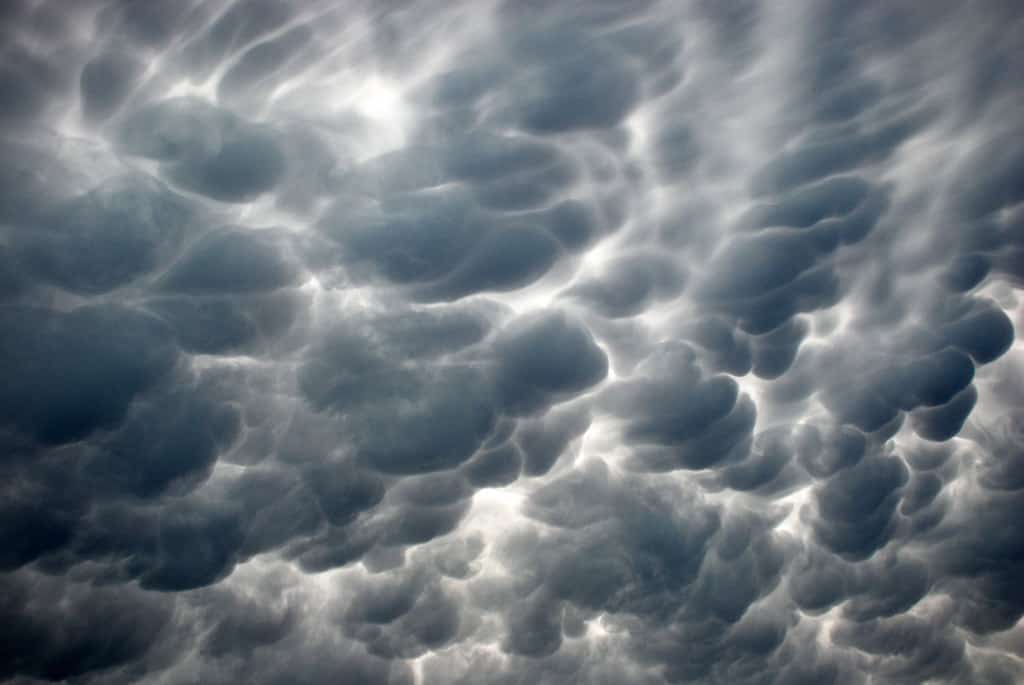 “Don’t know why there’s no sun up in the sky
Stormy weather…”
Written by Harold Arien & Ted Koehler, 1933

Severe weather has been much in the news lately. How much do you really know about weather and what to do to stay safe?

When compared to hurricanes and winter storms, thunderstorms affect a relatively small area. Most thunderstorms cover an area about 15 miles in diameter and last about 30 minutes. Want to know how far away a thunderstorm is? After you see a flash of lightning, you really can count “1 Mississippi, 2 Mississippi…” The rest – which most of us don’t know – is you divide that number by 5 and that will give you the approximate distance… So 10 “Mississippis” means the storm is really 2 miles away, not 10.

The conditions have to be right for a thunderstorm to develop. There must be moisture (creates clouds and rain), unstable air (warm air that can rise rapidly) and lift (caused by cold or warm fronts, sea breezes, mountains, or the sun’s heat). If a thunderstorm is considered severe, it brings wind over 58 mph, hail larger than 1/4 inch in diameter, causes wind damage and may produce tornadoes.

There is no thunder without lightning. Lightning is an electrical current and the channel of air through which it passes can be heated to 50,000°F – hotter than the surface of the sun! The energy from one lightning flash could light a 100 watt bulb for more than 3 months. The power of a bolt of lightning means there is no safe place outdoors in a thunderstorm. In the United States alone, lightning causes  between 50 and 100 fatalities and several hundred injuries each year. If you can hear thunder, you are close enough to be struck by lightning! 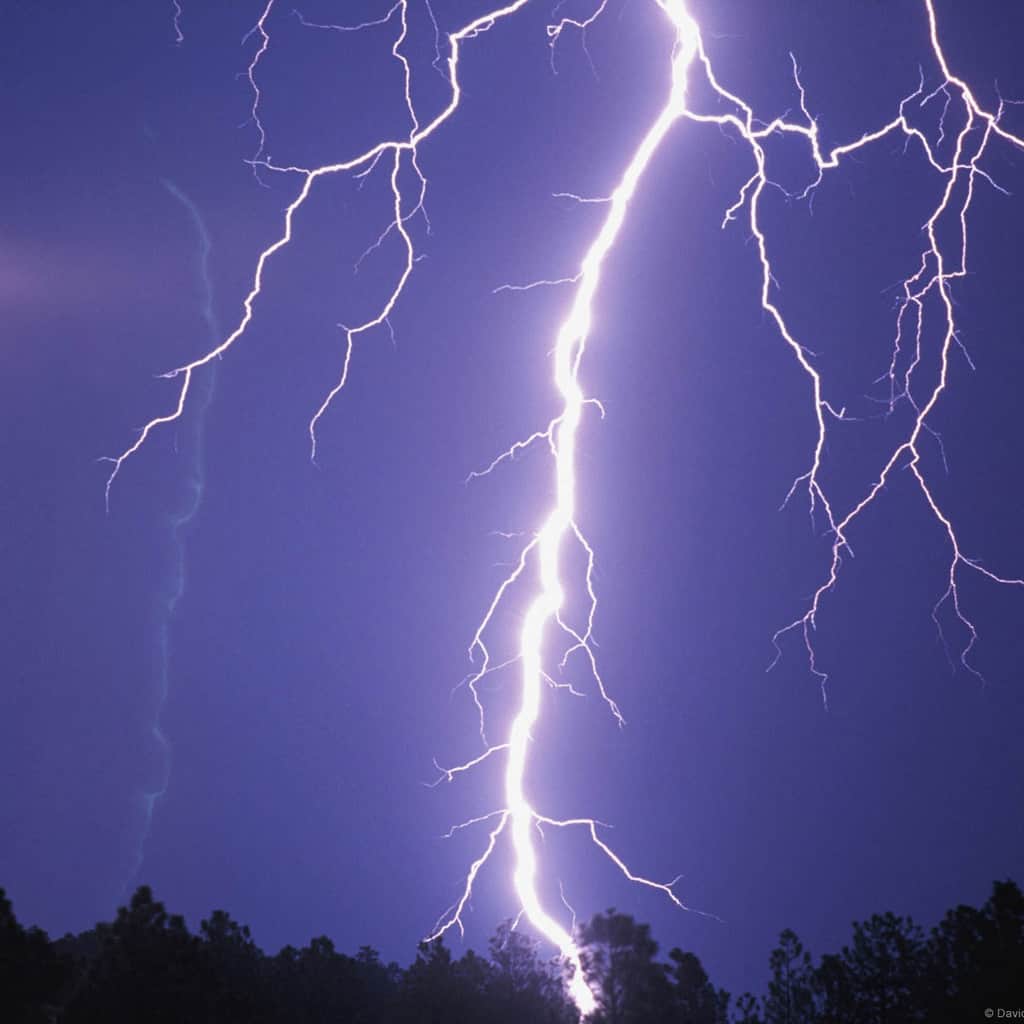 There are many “facts” about lightning that really aren’t facts… “Lightning never strikes the same place twice.” In reality, lightning prefers high places and the Empire State Building is struck about 25 times a year. “Rubber soles of shoes or rubber tires will protect you from being struck.” Nope. They provide no protection from lightning. The steel frame of a hard-topped vehicle will provide increased protection – just don’t touch the metal. “People who have been struck by lightning should not be touched.” Again, nope – lightning strike victims carry no electrical charge and should be helped immediately.

Rain, flash flooding, and hail are often parts of a severe thunderstorm. A flash flood occurs within a few hours (generally fewer than 6) of heavy or excessive rainfall – or if a dam fails or an ice jam breaks apart. Floods, as opposed to flash floods, are an abnormally high water flow that covers a naturally dry area. It usually takes floods much longer (more than 6 hours) to build up to dangerous levels. Floods and flash floods are the #1 cause of deaths associated with thunderstorms – more than 90 fatalities a year. More than half of those occur when a vehicle is driven into hazardous flood water. Six inches of rushing water can knock you off your feet and 2 feet of rushing water can wash away most vehicles, including SUVs and pickups. Turn Around, Don’t Drown!

Ever been hit by a hailstone? Water droplets are carried by an updraft to a height where they freeze, then when they grow in size and are too heavy to be supported by the updraft, they fall to the ground. They can fall at speeds 100+ mph! No wonder they hurt when you get hit! It is also why they cause so much damage to homes and vehicles. 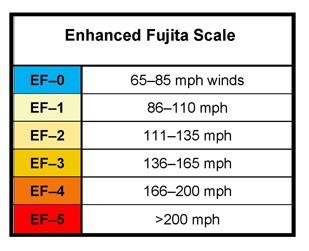 And then there are the tornadoes. They occur in many parts of the world, but most frequently in the United States. A tornado is a violently rotating column of air which is nearly invisible until it collects dust and debris within the funnel. They generally move from southwest to northeast, but can move in any direction and suddenly change directions, too. The average speed a tornado travels is about 30 mph, but they are sometimes stationary and can travel up to 70 mph. The strongest may have rotating winds of 200 mph. Tornadoes can also occur at any time of day and any day of the year. The Enhanced Fujita Scale (EF-Scale) measures the intensity of a tornado – ranging from EF-0 to EF-5.

You may have heard of “Tornado Alley.” Tornado Alley is not an official term, it is a phrase that has been popularized by the media. There really are no set borders to Tornado Alley, but it often is considered to be the area of Texas up through North Dakota and then east to Ohio, Kentucky and Tennessee. It is loosely designated depending on the criteria – frequency, intensity, or events per unit area. Iowa is generally considered to be a part of Tornado Alley.

Tornadoes can wreak havoc as they travel across the countryside. In 2006 an EF-2 tornado ripped through Iowa City. It  heavily damaged multiple buildings on the UI Campus. It also tore through the downtown area, collapsing walls of historic buildings. It left a 3.5 mile path of destruction and was 1/3 of a mile wide.

How do tornadoes develop? The National Oceanic and Atmospheric Administration (NOAA) says, “Before thunderstorms develop, winds change direction and increase in speed with altitude. This creates an invisible, horizontal spinning effect in the lower atmosphere. Rising air within the thunderstorm updraft tilts the rotating air from horizontal to vertical. An area of rotation, 2-6 miles wide, now extends through much of the storm. Most tornadoes form within this area of strong rotation.”

Straight-line winds are, well, winds not associated with the rotation of a tornado… They are responsible for most of the damage during a thunderstorm. A straight-line wind can exceed 125 mph!

Again, some things we’ve learned as “facts,” are, in reality, not true. “Lakes, rivers, and mountains protect areas from tornadoes.” Unfortunately, no geographic location is safe from tornadoes. “A tornado causes buildings to explode as it passes overhead.” Wrong again. Violent winds and debris slamming into buildings cause the most damage. “Open windows before a tornado to equalize pressure in the building.” Nope. Virtually all buildings leak. Leave the windows closed and seek shelter.

Awareness of the weather conditions in your area and having a plan in place for emergencies is, obviously, the best way to stay safe. For help in devising the plan which will work the best for you and your loved ones, visit the NOAA storm preparedness website.

Make your emergency preparedness plan and then be safe this spring and summer!