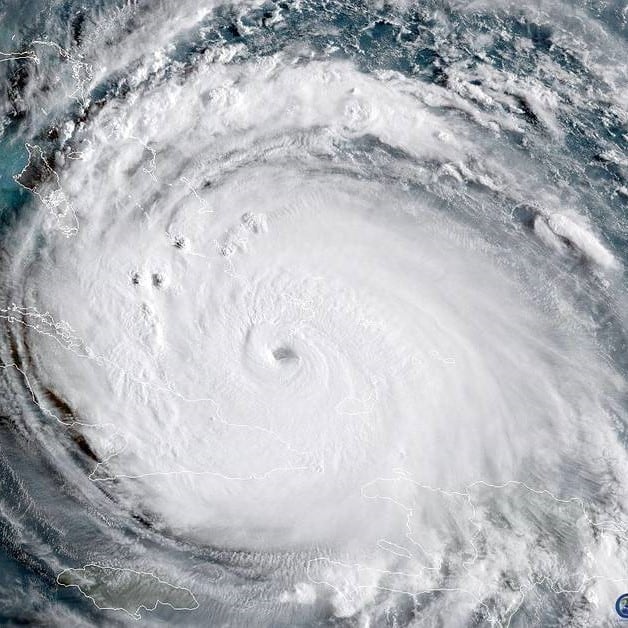 It’s hard to pay attention to the science behind hurricanes when people’s lives are on the line and everyone is waiting to see what will really happen.  Now that Harvey and Irma have done their worst, here are a few facts and interesting tidbits about hurricanes . . . information that will stand you in good stead when the next one approaches.  And there will be a next one. After all, the Atlantic hurricane season last through November 30.

How does a hurricane form? Briefly, hurricanes develop from smaller, but strong, thunderstorms which develop in tropical waters. If several thunderstorms cluster together and become stronger they can become a tropical depression. (A tropical depression has a relatively low air pressure and wind speeds between 23 and 38 mph circling around the center). If the wind speeds increase above 38 mph it is called a tropical storm and given a name (we’ll look at naming a little later). A tropical storm could last for days while moving across the ocean – fizzling out or possibly reaching shore. If winds intensify and reach 74 mph, the storm becomes a hurricane. (The speed of 74 mph was first calculated by Sir Francis Beaufort in 1805…) 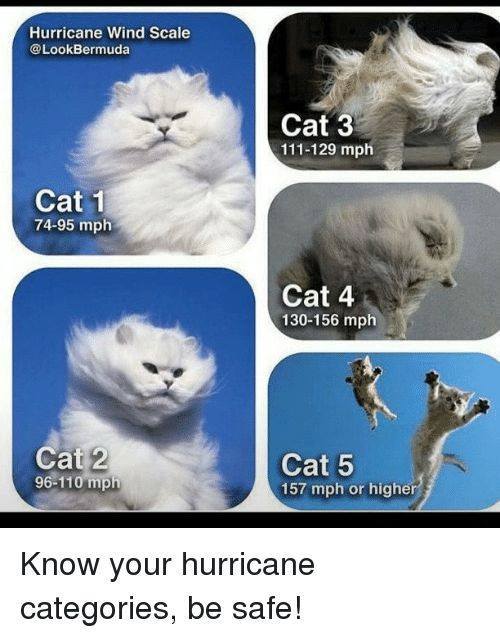 Now, about those categories. The graphic on the left may be humorous – but it is accurate (at least as far as the facts go, not sure about the cats…Notice I’m refraining from saying anything about ‘cat’egories…). A category 1 (winds between 74-95 mph) will produce some damage (roofs, siding, gutters, trees, and the possibility of power outages lasting several days). Category 2 (96-110 mph) will cause extensive damage (major roof damage, trees snapped and uprooted, and near total power outage which could last weeks). Devastating damage will occur with a category 3 (111-129 mph) hurricane (homes will sustain major damage, many trees will be uprooted blocking roads, water and electrical outages could last weeks). Catastrophic damage will occur with a category 4 (130-156 mph) hurricane (homes suffer severe damage, most trees will be uprooted or snapped, power poles will come down, residential areas will become isolated and most areas will uninhabitable for weeks or months). Category 5 (157 mph and higher) damage is catastrophic (most homes destroyed, residential areas isolated, water and electrical outages will last months and most of the area will be uninhabitable for months or longer). This is only the damage from the winds and doesn’t include the flooding from the rain and storm surges.

So, where does the data come from? Data on individual hurricanes is gathered using satellites and radar – but that data isn’t as complete as when hurricane hunters are also collecting data. Yes, there really are Hurricane Hunters who fly through the eye of the hurricanes on purpose! Specially equipped National Oceanic and Atmospheric Administration (NOAA) aircraft play an integral role in hurricane forecasting. Instruments on board are continually transmitting measurements of pressure, humidity, temperature and wind direction – all which help give scientists and forecasters real-time access to the storm information. And these Hurricane Hunters make the run through the eye of the storm over and over again during an 8-10 hour shift!

So what’s the deal with naming the hurricanes? It’s pretty simple – human names are easier to remember than meteorological numbers. If there is more than one hurricane at a time (like now) there is much less chance for confusion when referring to the storms. There are six lists of names, which are used in rotation. One list is used one year, then the next list the following year, etc. Names on the list are alphabetical with one name for each letter (with the exception of the letters Q, U, X, Y and Z, which have no names associated with them). This system of relying on names from these lists began in 1953, and was begun by the National Hurricane Center. These lists are now maintained and updated by an international committee of the World Meteorologic Association.

The origins of the modern naming system may be traced back to a 19th century Australian meteorologist named Clement Wragge (known as Wet Wragge….). He started out using letters of the alphabet and then switched to using popular female names in the South Pacific. It is also said that he sometimes named hurricanes after politicians who were not supportive of his work …

In the 1960s women began to speak out about the inequality of gender-specific names. Finally, in 1979, male name’s were introduced and they now alternate with female names. The first hurricane with a male name was “Bob” and he hit the Gulf Coast on July 11, 1979. The names of hurricanes which are particularly destructive and deadly are retired – Irene, Katrina, Sandy, and Matthew are recent examples. It is expected that the names Harvey and Irma will be retired after this year.

Would you like to prepare for the hurricane by watching some hurricane-themed movies? You might want to watch Key Largo, Thunder Bay, The Killer Shrews, and Hurricane for example!

Or perhaps you’d like to create your own hurricane playlist? There are a number of possible songs – Ridin’ the Storm Out (REO Speedwagon), Riders on the Storm (The Doors), Like a Hurricane (Neil Young), and so many more.

Wherever you are – please be safe! Listen to the forecasters and officials in your area. The category meme, the movies and the playlist might make light of hurricanes, but they are dangerous, destructive, and can be deadly.

Volcovici, Valerie and Brian Thevenot. Sept. 1, 2017. After bungling Katrina, Hurricane Harvey is a big test for FEMA – and tens of thousands of Americans are counting on federal help.  Business Insider : Politics.