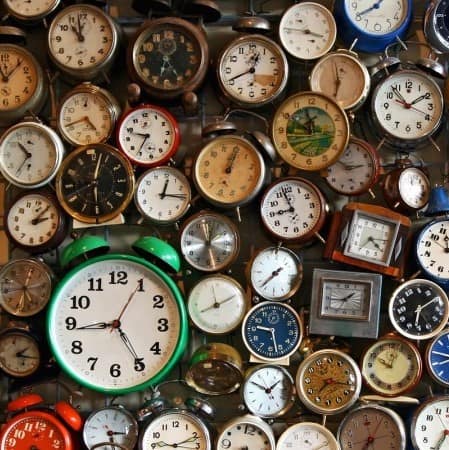 Stop in and see our new exhibit “Engineering Time” 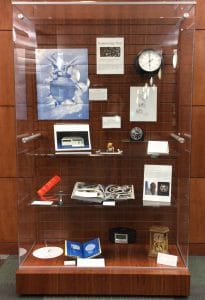 “Five thousand years ago, Sumerians had a calendar that divided the year into 30-day months, divided the day into 12 periods (each corresponding to 2 of our hours), and divided these periods into 30 parts (each like 4 of our minutes).”[2] The year began and ended around the harvest each year. The harvest began at different times each year, depending on how the crops had grown, resulting in an irregular year. Once the scribes began accounting and making records they shifted to a regular 12 month year with 30 days, or 360 total days. During the 8th Century BCE, civilizations began to adopt the 365 day calendar.

For the smaller increments of time, early means of measurement were simple. A gnomon was a simply a stick, tree, or person standing upright and the shadow was measured. This would evolve into the sundial. Clepsydras, or water clocks, were developed during the 16th-13th century BCE. These were filled with water, which dripped out of the bottom and had markings in the upper portion to measure the passage of time by the decreasing water level. Yet another simple form of measuring time was the fire clock, which was a braided fuse that was tuned to burn for 4 hours.[3]

Fast-forward a few thousand years to around 1086 when Chinese engineer, astronomer, and calendrical scientist Su Song designed a hydro-mechanical astronomical clock tower. It was forty feet high and was completed by 1092. It used the same technique as the Clepsydras, but the draining water caused gears to turn which shifted displays of the lunar cycles.[4]

The Salisbury Clock from 1386, is the oldest working mechanical clock in the world. By the 14th Century “every” town had a clock with a striking mechanism. Having such a clock became a status symbol for towns.[5]

Christiaan Huygens was a Dutch mathematician and scientist known for his work as an astronomer and horologist, which is the study of time. He combined these two fields because accurate time measurement is a key to astronomy. He designed and had the first pendulum clock built, which he presented to the world in 1657.[6] Then he developed the balance spring clock in 1675.[7] This invention makes it possible to create pocket watches, since the balance spring clock was small, could be shaken, held in any direction, and remain accurate.

In 1754, Jean Romilly presented the first watch with a “dead seconds” system.[8] A “dead seconds” system is a watch, or timepiece, with discrete jumps between each second. This is complicated because the balance runs at about 5 times per second. Mechanical gears must be added to slow the balance down to 1 second in order to display the second hand.

The Industrial Revolution made numerous goods more affordable for the masses. Prior to the Industrial Revolution watches were only available to the wealthy, due to the expensive cost of the hand-craftsmanship of each timepiece. However, with the Industrial Revolution machinery lead to a decrease in the production time and specialization needed to create a watch. This advancement led to the creation of the Proletarian Watch, also known as the “One-Dollar Watch.”[9] George Roskopf wanted to lower the price even more by developing a watch that could be sold for 20 Francs – in the 1860s not counting for inflation. His work led to US Patent 75,463.

During the 20th century the advances in technology allowed for a more precise measurement of time. The 13th General Conference on Weights and Measures, in 1967, defined 1 second as “9,192,631,770 periods of the radiation corresponding to the transition between two hyperfine levels (F=3 and F=4) of the ground state of the caesium-133 atom.”[10] This is the measure still in use today. The US Naval Observatory in Washington D.C. uses 57 high performance caesium atomic clocks to set the Master Time for the United States. These clocks, in conjunction with other countries’ master clocks, guide astronomy, aerospace, telecommunication, and all other forms of activities.

[1] Dominque Fléchon, The Mastery of Time: A history of timekeeping, from the sundial to the wristwatch: discoveries, inventions and advances in master watchmaking (Paris: Flammarion, 2011).