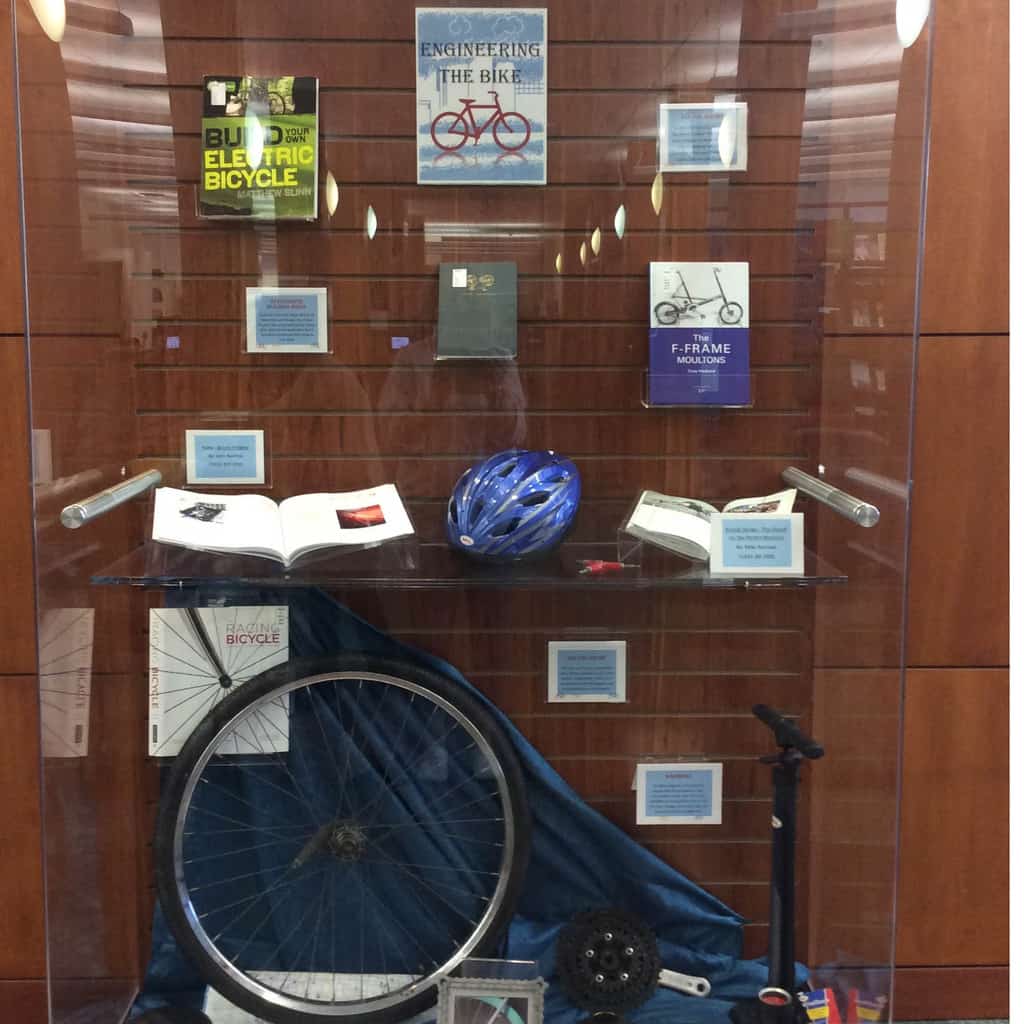 It’s summer! The perfect time to learn about the engineering of the bicycle and we have a new exhibit highlighting bicycles and their engineering! 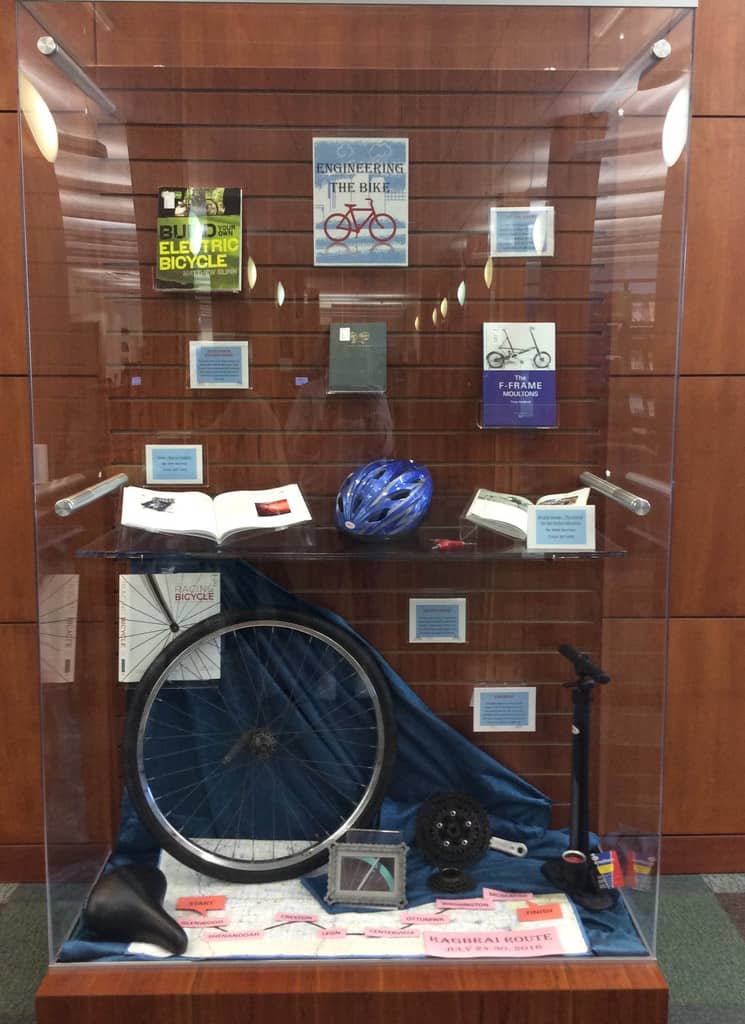 Do you remember your first bike? And telling your folks “don’t let go” the first time the training wheels came off? Most of us loved the exhilaration and freedom riding a bike brought and didn’t really think about the history and engineering of the bicycle…

The history of the bike begins with the velocipede which was designed after the Napoleonic Wars (1803-1815). From there it developed into the ‘penny farthing,’ to the safety bikes, and then to the bikes we have today. And there are a myriad of types of bicycles today. Not just for pleasure or riding to work, there are many bikes designed for racing and extreme sports. There are road events (i.e. Road Criterium), off-road events (i.e. Cyclo-cross), and track racing (i.e. Olympics). 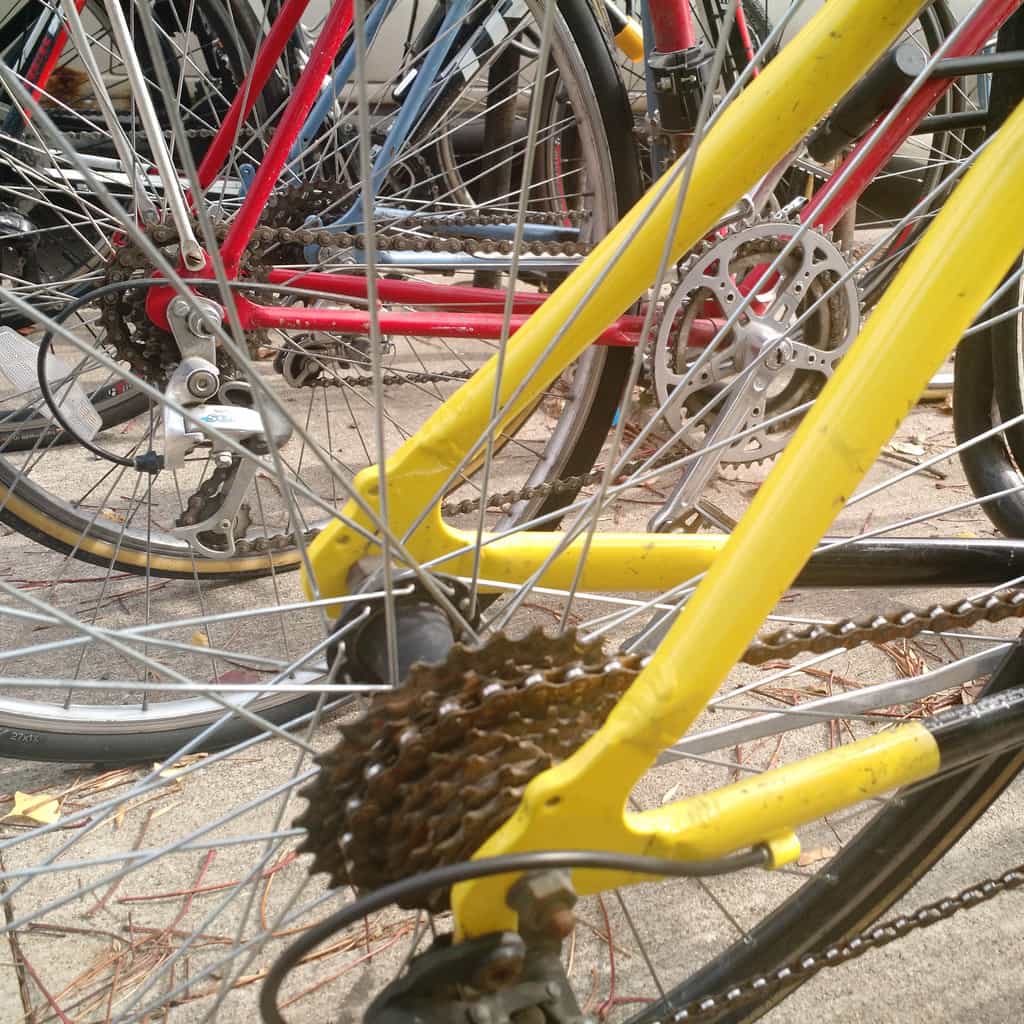 A lot of engineering is involved in designing and creating a bike. Designers look at multiple factors – aerodynamics, the wheel & spokes, tires, balance, ergonomics, and the different material with which to make the body and the tires. Looking at aerodynamics means exploring the shape of the bike and how that affects the air flow and drag. The design of the wheel looks at the width and diameter of the wheel, and the type of spokes. The wheel design and the tires also vary depending on how the bicycle will be used – city streets? Off-road? Tour de France? There are also ergonomic factors – pedal to saddle distance, crank length, saddle to handlebar dimensions…. And the frames – what materials are used – steel, low carbon, chrome moly. Performance bikes often use low alloy steel and chrome moly which meet aviation industry specifications.

Want to try your hand at hacking your bike? Make: Bicycle Projects will help you do just that! It includes everything from a list of what should be included on a bike hacker’s workbench to commercial add-ons, to SpokePOV (Spoke Persistence of Vision). Want a bike that glows in the dark? Or a ‘parade bike’ which has built in speakers? Make : Bicycle Projects will walk you through and help you create your own unique hacks.

Here at the University of Iowa, Steve McGuire, Professor of Metals Arts & 3D Design and Studio Division Coordinator in the School of Art & Art History, has created a handmade bicycle curriculum. The UI is the first academic institution to be selected to exhibit the work of students at the North American Hand Built Bicycle Show. It is the most prestigious venue of its kind internationally. The program was started in 2010, and since then over 70 students have built bicycles and some have gone on to become engineers and craftspeople in the bike industry.

What else is going on locally in the biking environment?

In an article from the May 18, 2016 The Gazette, B.A. Morelli explains how Iowa City and Cedar Rapids are working to make both cities more bike friendly. Iowa City is testing a low-volume and low-speed street that gives priority to cyclists – a bike boulevard. Cedar Rapids has painted green dedicated bike lanes. It has also expanded the use of “supersharrows,” (paint markings are the silhouette bordered by dashed lines that you see painted in the center of the travel lane). Road diets may also be in the future. A road diet squeezed four lanes of traffic into three with the center lane for turning and with bike lanes on each side.

It is hard to live in Iowa and not know about RAGBRAI (the Register’s Annual Great Bicycle Ride Across Iowa) which is now an international event and has 8500 registered riders. Many riders hop in for a leg or two of the ride, so there are more than 8500 riders biking through Iowa during the week-long trek. This year the ride begins in Glenwood and ends in Muscatine. The longest leg of the ride is 75.2 miles and has a total of 3,994 feet of climb!

Iowa City also has a Bike Library. Bikes are donated and then repaired and offered to the public. Bikes are priced with a deposit and checked out for 6-month periods. If the bike is returned in good condition, the deposit is returned. The patron may also choose to keep the bike and forfeit the deposit. They also have “Rent-a-Bench” where you can work on your bike for $5/hour during specified hours. A big thank you to them for donating several of the items in our display!

Stop in and check out our bike exhibit – you