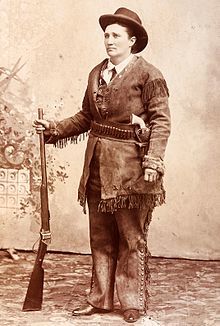 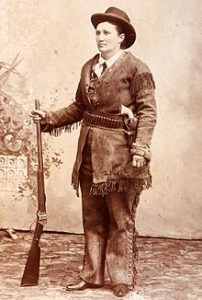 The sixth episode of Historically Yours is here and this time we’re joined by Graduate Assistant Elizabeth Riordan.

For this episode, Liz recalls her Wild West phase as a child and reads a letter from a train conductor in South Dakota looking back years later and telling the tale of meeting “bundle of rags” Calamity Jane the week of her death, and carrying her off the train.

Know anything more about this letter? 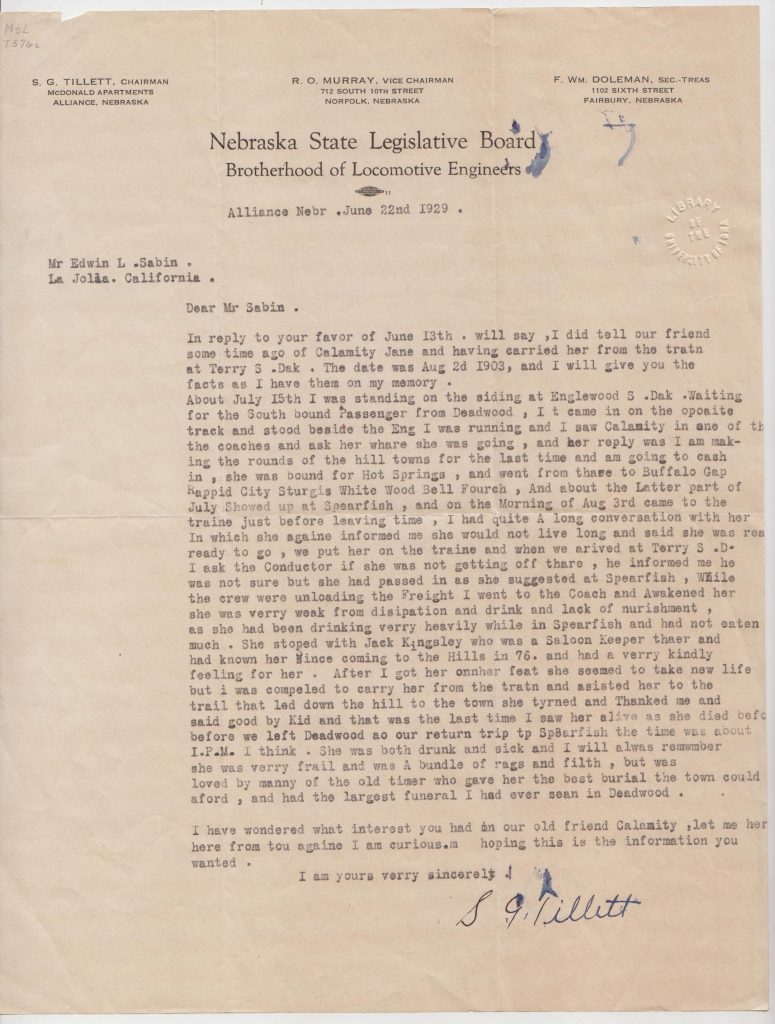 In reply to your favor of June 13th. will say, I did tell our friend some time ago of Calamity Jane and having carried her from the tratn at Terry S. Dak. The date was Aug 2d 1903, and I will give you the facts as I have them on my memory.

About July 15th I was standing on the siding at Englewood S. Dak. Waiting for the South bound Passenger from Deadwood, It came in on the opoaite track and stood beside the Eng I was running and I saw Calamity in one of the coaches and ask her whare she was going, and her reply was I am making the rounds of the hill towns for the last time and am going to cash in, she was bound for hot Springs, and went from thare to Buffalo Gap Rappid City Sturgis White Wood Bell Fourch, And about the Latter part of July Showed up at Spearfish, and on the Morning of Aug 3rd came to the traine just before leaving time, I had quite A long conversation with her In which she againe informed me she would not live long and said she3 was ready to go, we put her on the traine and when we arived at Terry S. D. I ask the Conductor if she was not getting off thare, he informed me he was not sure but she had passed in as she suggested at Spearfish, While the crew were unloading the Freight I went to the Coach and Awakened her as she had been drinking verry heavily while in Spearfish and had not eaten much. She stoped with Jack Kingsley who was a Saloon Keeper thaer and had known her since coming to the HIlls in 76. And had a verry kindly feeling for her. After I got her onnher feat she seemed to take new life but i was compleled to carry her from the tratn and asisted her to the trail that led down the hill to the town she tyrned and Thanked me and said good by Kid and that was the last time I saw her alive as she died before we left Deadwood ao our return trip tp Spearfish the time was about I.P.M. I think. She was both drunk and sick and I will alwas remwmber she was verry frail and was A bundle of rags and filth, but was loved by manny of the old timer who gave her the best burial the town could aford, and had the largest funeral I had ever sean in Deadwood.

I have wondered what interest you had in our old friend Calamity, let me here from tou againe I am curious. M hoping this is the information you wanted.

I am yours verry sincerely. 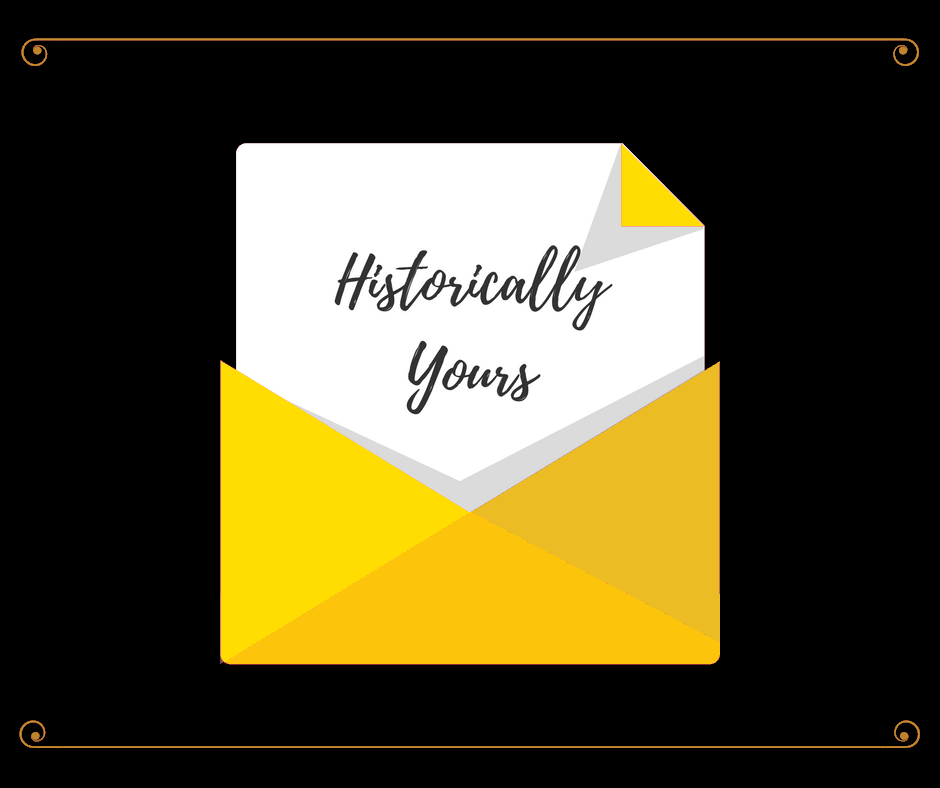 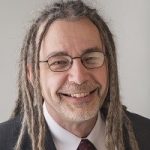 The fifth episode of Historically Yours is here and this time we’re joined by University Archivist David McCartney.

For this episode, David McCartney tells a poignant tale of letter writing past and present and then reads us a letter from James Thurber from his time at the New Yorker in 1935.

Know anything more about this letter? Able to track down the article they are referencing? 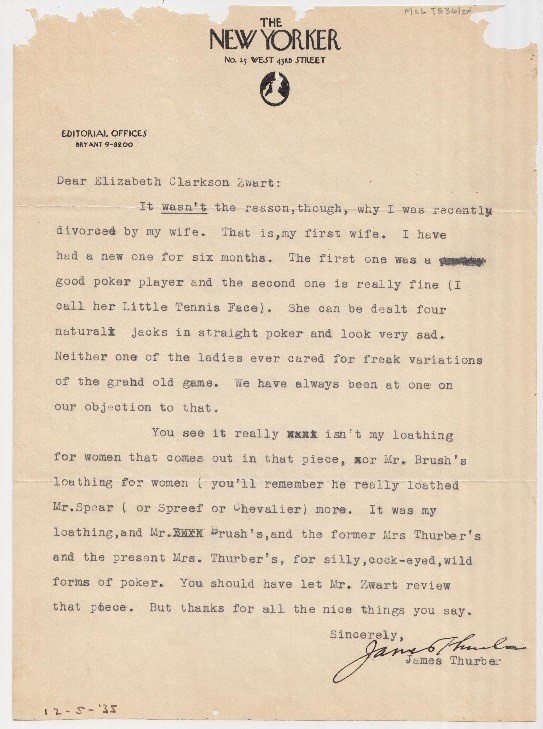 It wasn’t the reason, though, why I was recently divorced by my wife. That is, my first wife. I have had a new one for six months. The first one was a good poker player and the second one is really fine (I call her Little Tennis Face). She can be dealt four natural jacks in straight poker and look very sad. Neither one of the ladies ever cared for freak variations of the grand old game. We have always been one on our objection to that.

You see it really isn’t my loathing for women that comes out in that piece, or Mr. Brush’s loathing for women (you’ll remember he really loathes Mr. Spear (or Spreef or Chevalier) more. It was my loathing and Mr. Brush’s, and the former Mrs Thurber’s and the present Mrs. Thurber’s, for silly, cock-eyed, wild forms of poker. You should have let Mr. Zwart review that piece. But thanks for all the nice things you say. 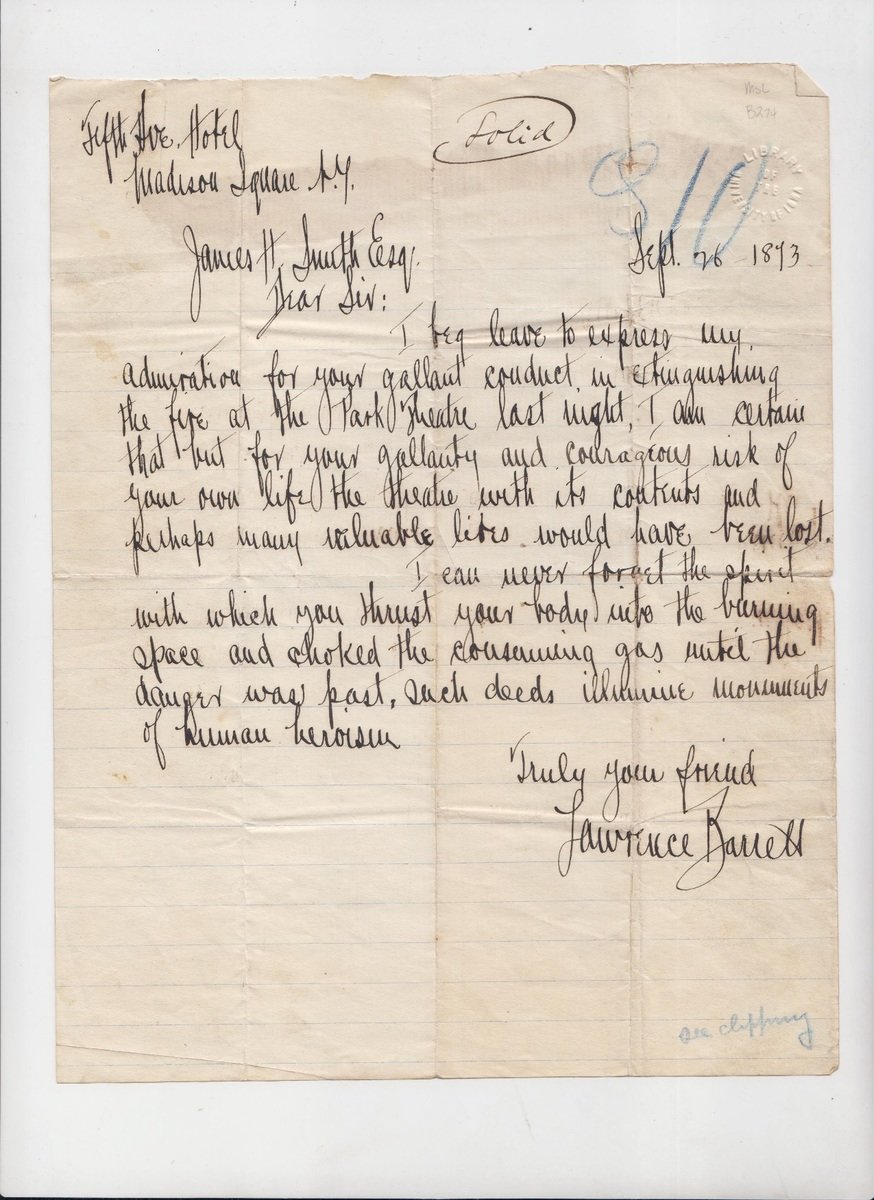 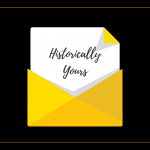 Historically Yours is brought to you by the wacky folks who wander in and out of the University of Iowa Special Collections. Your host is Colleen Theisen, today’s guest is Liz Riordan.

Our theme music was composed by Will Riordan.

(Subscribe on Podbean, iTunes, or Pocket Casts. Let us know where we should syndicate.)

Do you know anything about the letter from today’s episode? About the clipping mentioned in blue pencil on the letter? About the Park Theater or Mr. Smith?

Letter from this episode: 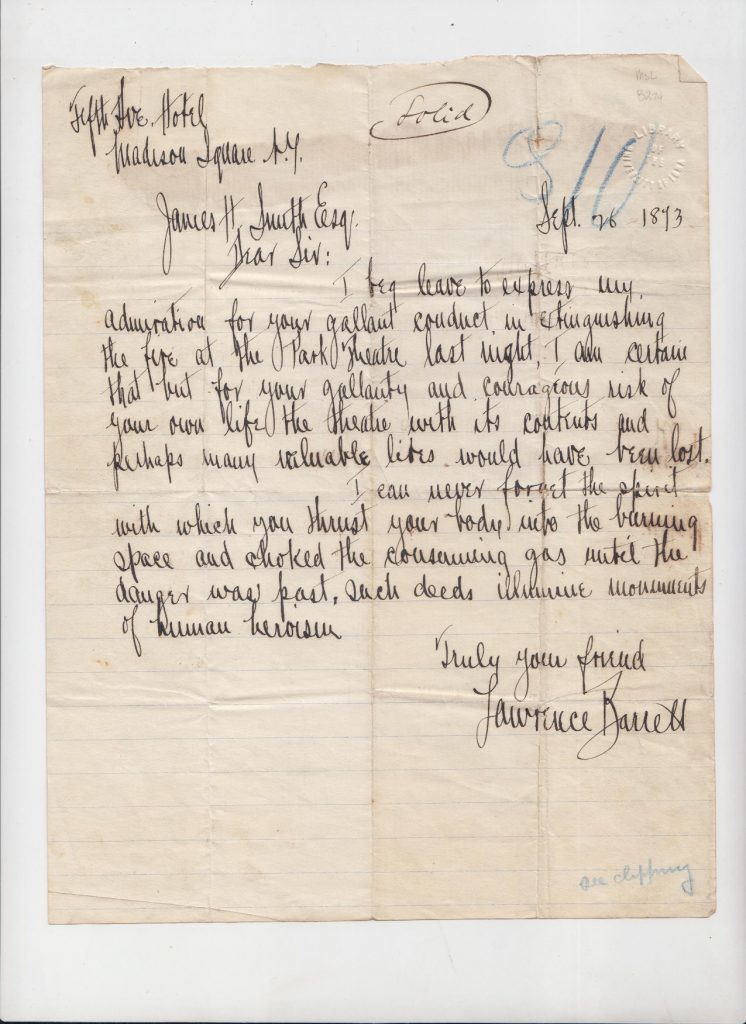 The University of Iowa Special Collections has a new podcast, Historically Yours which will be a biweekly podcast. In each episode Outreach Librarian Colleen Theisen and a guest will read one historic letter, research the context, and discuss the role of letter writing past and present.

Do you know anything about Mr. Corder? Or Mr. Vachell? Or anything else in this letter? Let us know.

Write to us with information, feedback, stories or comments and we’ll read them on the podcast:

Here is the letter from episode 1: 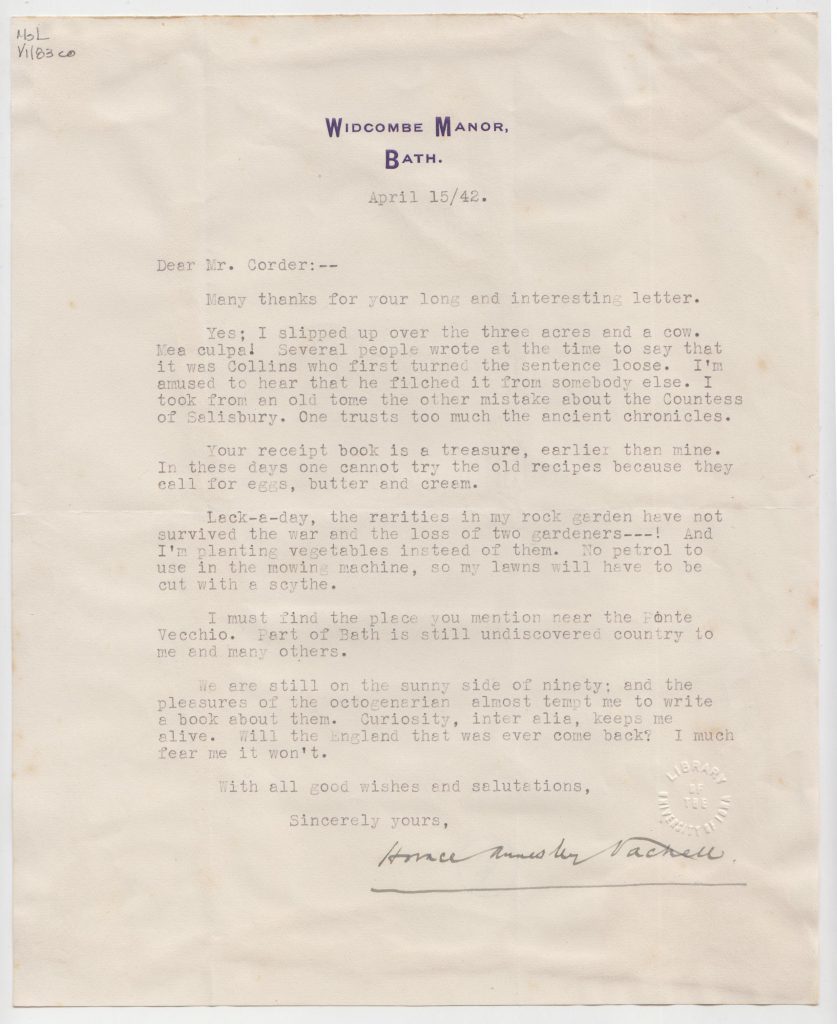