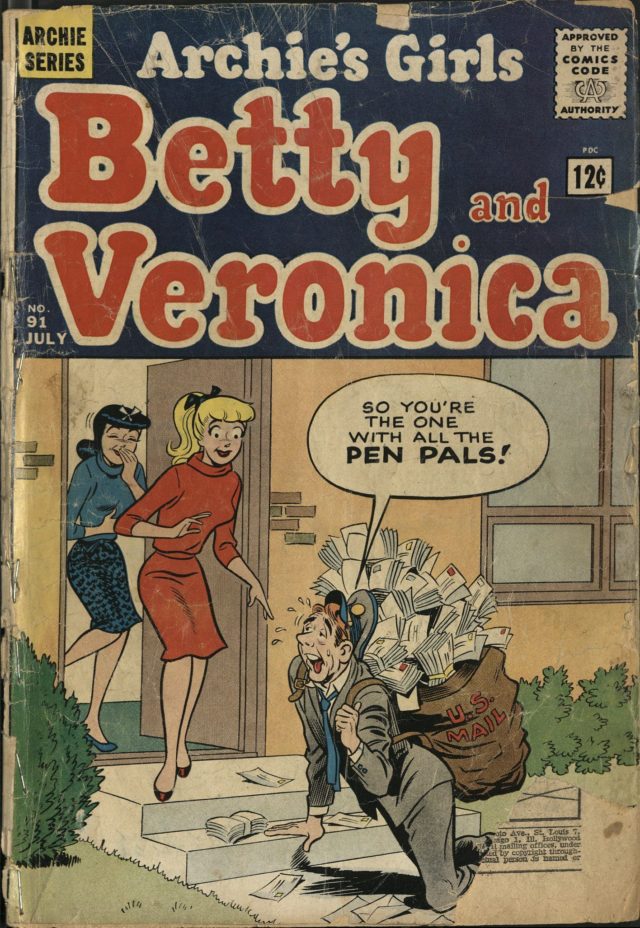 “From the Classroom” is a series that features some of the great work and research from students who visit our collections. Below is a blog by Kelli Brommel from Dr. Jennifer Burek Pierce’s class “Reading Culture History & Research in Media” (SLIS:5600:0001).

Amongst the wide variety in the female-driven comics in the Jen Wolfe Comic Book Collection (MsC 879), you will find a well-worn copy of Archie’s Girls Betty and Veronica from July 1963. If you’ve never read an Archie comic, what might strike you first is the unabashed stereotyping of the characters. The second thing to catch your eye will most likely be the advertisements. Taken as a whole, the comic manages to be aimed both at everyone and no one in particular.

Imagine scrolling through your social media and being confronted with an ad that seems so off, so… not you. Chances are this off-putting ad will leave you feeling misunderstood, even angry. We are now so accustomed to targeted ads that mass marketing feels laughable, the relic of a bygone era.

Step into that era with Archie’s Girls Betty and Veronica.

Within the pages of this issue, readers are tempted with a “live sea circus,” Bendix bike accessories, Popsicle brand safety awards in which cartoon characters announce that anyone up to age 16 can be nominated to win, and 147 model cars for only $2.49. These promotions are clearly geared toward children with enough money to spend on novelties.

However, there are also ads which feature adults and teens, where one can learn to play guitar in seven days, attend international correspondence school to finally get that high school degree, buy a set of “self-teaching” encyclopedias to “fill the gaps in your Family’s Education,” and learn to hypnotize in “just one evening.” Inside the back cover is an especially confusing ad calling on “Boys! Girls! Ladies! Men!” to sell Cloverine Brand Salve and be rewarded with prizes ranging from air rifles to jewelry boxes to “a real live pony for your very own.”

Archie Comics has been around in one form or another since 1939, founded initially as MLJ Magazine (Wikipedia, 2022). The lack of ad targeting could very well have resulted from a confusion about audience and a desire to reach anyone who might pick up a copy.

“The first decades of comic book publishing were experimental in many ways, as creators and publishers tried out formats, genres, and narrative strategies in an effort to determine what was most saleable. Presumably, they were also figuring out who would read comic books and what products could be sold to them.” (Beaty & Woo, 2021)

Archie comics have sometimes been described as “romance” comics, with adolescents as the intended audience. Romance comics, as opposed to the typical superhero fare, are thought to have “helped define the role of the American teenager as a viable entity in society” (Andrus, 2021). However, Archie comics have also been described in terms of their cheap accessibility, making their presence as a “lowbrow art form” nearly ubiquitous (Beaty, 2014). This meant that anyone could get their hands on these comics, therefore people of all ages could be (and probably were) reading them.

Parental concern with inappropriate comic book content, stemming from the publication of the book Seduction of the Innocent and subsequent congressional hearings, resulted in the creation of the Comics Code Authority (CCA) in 1954. The CCA oversaw the enforcement of thirty-seven laws related to comic book production, which included a code for “advertising matter.” The obvious prohibitions were nudity, weapons, gambling, and fireworks. They also hoped to exclude ads which made false claims and did not “conform to fact.” (Andrus, 2021). In 1974, the Children’s Advertising Review Unit (CARU) was created by the Council of the Better Business Bureau. One of the basic principles they hoped to reinforce was that advertisers should not give “unreasonable expectations of product quality or performance” (Heinzerling & Chandler, 1992). While the CCA was specific to the comic book industry, CARU dealt with any advertising aimed at children, in all available media. Both were established as self-regulating entities. In the 1963 issue of Archie’s Girls Betty and Veronica, several of the ads proffer wild claims, most notably the one for a hypnotism course, making the CCA seal of approval on the front cover feel, itself, like false advertising.

One of the most endearing qualities in Issue 91 of Archie’s Girls Betty and Veronica, is that so many of the mail-order coupons have the original owner’s information filled out in what appears to be a child’s handwriting. Pinkie Smith of St. Louis, Missouri seemed interested, at least temporarily, in many of the ads, including the sea circus and the set of encyclopedias, but none of the coupons were taken out and mailed. We will never know whether this was because Pinkie had a change of heart, the comic was misplaced, or a parent intervened. Whatever the case may be, Pinkie was wise enough to avoid the hypnotism ad entirely.

Andrus, W. (2021). The Infinite Crisis: How the American Comic Book Has Been Shaped by War. ProQuest Dissertations Publishing. 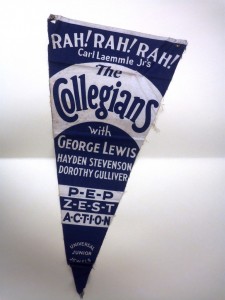