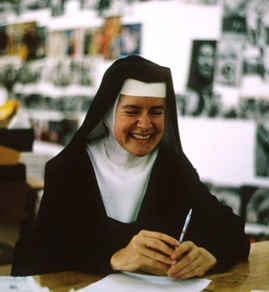 The following is written by Rachel Miller-Haughton, former Olson Graduate Research Assistant and curator of All Women Welcome exhibit

All Women Welcome: Voices of Activist Iowa Women is the summer 2022 exhibit in the Special Collections Reading Room. The culmination of my time as the 2020-2022 Olson Graduate Research Assistant, the exhibit features images, documents, and materials from the collections of interesting, trailblazing Iowa women. Writing our #VoicesfromtheStacks series allowed me insight into previously unseen collections from people of all backgrounds. The goal is to expand our holdings in all directions to reflect the diversity of the University of Iowa and this community.

The women featured in this exhibit made an impact in the causes they worked for, both within their communities of identity and for all human rights. While these women’s lives did not often overlap, the positive changes they made touched many lives. Ayako Mori Costantino’s family immigrated from Japan, Florence Vallejo Terronez’s from Mexico. They worked to better their communities of origin, but also advocated for human rights, as did Virginia Harper. Pearl McGill fought for all worker’s rights. Corita Kent and Lil Picard turned to art for their messages. Picard was a journalist, as was Judy Hoit, whose writings on disability in the workplace made Iowa more accessible. Tess Catalano fought for women’s rights in the 80s as well as gay rights. The intersectionality of these activists’ work was necessary. All saw themselves as part of a lineage of advocates. My hope is for this lineage to continue with new voices at Special Collections. These are just some of the many diverse stories told in the archives, and more voices will join them in the future.

Here are the women featured in the All Women Welcome exhibit: 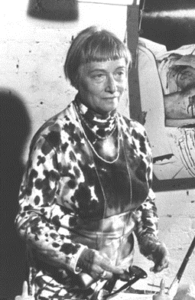 Lil Picard (1899-1994) was born in Landau, Germany. She lived in Berlin, and was involved with writers, artists, composers, filmmakers, and actors. Lil Picard appeared in cabaret performances, then turned to journalism, fashion designing and modeling. Lil and her husband Hans Jüdell immigrated to the United States in 1936, alarmed by the anti-Semitic policy of the national socialist government.

She learned English and took design and lettering classes, opened a milliner studio, and from the 1950s forward she worked as a journalist and artist. She had exhibitions of paintings, sculptures, watercolors, and photos. She participated in Avant Garde Festivals of New York. She was financially independent when few women were, tested boundaries, and committed her writing and art to social justice, equality, and peace. 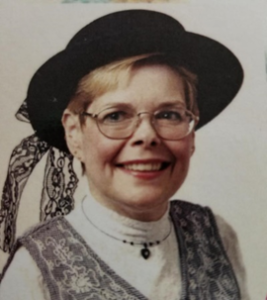 Judy Herron Hoit (1945-2019) was born on a farm south of Coon Rapids, Iowa. When she was four, she contracted polio. In 1952 she received six months of treatment at a polio facility built by Franklin Delano Roosevelt in Warm Springs, Georgia. Hoit spent six years at Warm Springs, returning to her home when she was thirteen. She graduated from Guthrie Center High School in 1964. In 1977 Hoit and her sons moved to Iowa City where she worked as a receptionist and typist. Though many people suggested she request disability status, she resisted the idea. Hoit authored several articles explaining disability access and disability awareness. Judy won the Handicapped Woman of Iowa Pageant in 1991, which led to many speaking engagements for her throughout the state. She created a consulting business which addressed accessibility and awareness issues for people with disabilities. In 1996 Hoit was named Ms. Wheelchair Iowa. She was state coordinator for Ms. Wheelchair Iowa in 1997 and 1998. 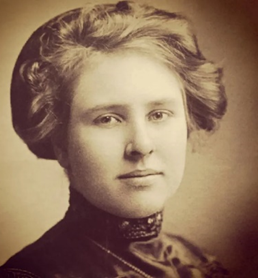 Button worker, early twentieth century labor activist, and teacher, Ora Pearl McGill (1894-1924), was born on a small farm in Louisa County, Iowa. Known as Pearl, she left her home at the age of sixteen to work at a Muscatine, IA button factory, intending to save her wages and become a schoolteacher. She quickly became involved in a union organizing drive that was underway in the Muscatine button factories and served as recording secretary of the Button Workers Protective Union (BWPU) No. 12854, an affiliate of the American Federation of Labor (AFL).

She became a strike worker, making countless speeches to local unions in industrial cities across the country, including St. Louis, New York City and Boston, to raise money to support the striking button workers in Muscatine. Later she joined the Industrial Workers of the World (IWW) and was an outspoken activist and organizer during the Lawrence textile strike of 1912. In 1913 she taught at a rural school in Lone Tree, Iowa. On April 30, 1924, she was murdered by Ed Vance (her ex-husband), following his release from a mental institution. Pearl McGill was inducted into the Iowa Labor Hall of Fame at the 2006 convention of the Iowa Federation of Labor. 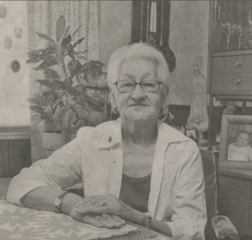 Florence Vallejo Terronez was born in Horton, Kansas, in 1924 to Martina Morado and Julio (Julius) R. Vallejo. Martina Morado was born in Guanajuato, Mexico, and came to the United States in 1910 when she was thirteen years old with her mother, Angela Morado, and her brother. The family settled in the railroad town of Horton, Kansas, where the children helped their mother run a boarding house. Julio Vallejo, like many railroad workers, was laid off during the Depression, and for two seasons the entire family worked the beet fields in Minnesota. In 1941, when the railroad in Horton closed, the family moved to West Des Moines, Iowa, where Julio Vallejo continued to work as a pipefitter for the Rock Island Railroad. Florence Vallejo attended school in West Des Moines. During the 1940s and 1950s she continued to live with her family, working as a nurse’s aide at Broadlawns Medical Center and as a long-distance telephone operator for the Northwestern Bell Telephone Company. In 1956, Florence Vallejo married Antonio (Anthony) Terronez.

Florence Terronez became a full-time mother, managing the household and caring for her four stepchildren and two more children who were born later. She was involved in her children’s school and church activities, sang in the church choir, and later worked as a nurse’s aide at St. Anthony’s Hospital in Rock Island, Illinois. Following her retirement she volunteered with the Genesis Medical Center in Silvis, Illinois, and served on the community service auxiliary of the Veterans of Foreign Wars post in East Moline, Illinois.

Human rights activist and singer-songwriter Theresa Mary “Tess” Catalano (1959-1999) was active in organizations such as the Women’s Resource and Action Center (WRAC) and Common Lives/Lesbian Lives that supported feminists and lesbians. She was born in Athens, Ohio, in 1959. She attended Allegheny College for one year, then came to Iowa City and completed a BA at the University of Iowa in 1985. She organized Take Back the Night rallies, was arrested for protesting South African apartheid, and sang at benefits for the causes she cared most about.

Catalano supported herself during her undergraduate years by driving city and school buses and working at the University of Iowa’s accounting and maintenance departments. Catalano became a certified massage therapist after completing training at the Desert Institute of the Healing Arts in Phoenix, Arizona, in 1994. She returned to Iowa City where she practiced massage until she and her partner, Rebecca Teasdale, moved to Oregon in 1997. After a year in Portland, the couple moved to Eugene, Oregon, where Tess Catalano died suddenly in 1999. Memorial services were held in both Eugene and Iowa City as hundreds of people mourned her passing and remembered her contributions to their communities. 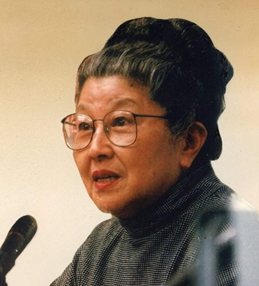 Ayako “A. Mori” Mori Costantino (1924-2020) was born in Sacramento, California. As a child, she and her family were interned at Tule Lake in 1942, one of thousands of Japanese-American families whose lives and farms were taken away from them because of their heritage during the Second World War. She was heavily involved in activism and worked towards redress for those who had been interned, as well as women’s, minority, and civil rights–especially when she lived in Iowa City. In October 1946 after the end of World War II, Costantino, working with occupation forces, travelled to Japan for a stenography job. While in Japan she met and married a military serviceman, Anthony “Tony” Costantino, in 1948. Costantino and her husband had two children, son Mori, and daughter Toni.

Integral to the creation of the Iowa City Human Relations Commission in 1963, Mori Costantino assisted in drafting the Iowa City Human Rights Ordinance. She also spearheaded a project to investigate housing discrimination with a League of Women Voters volunteer task force of 47 women. The housing investigation led to the passage of a fair housing law in 1964 mandating non-discriminatory housing practices and establishing enforcement procedures. In 1977, Costantino was elected to represent Iowa at the National Women’s Conference in Houston, Texas. In addition to her service to multiple organizations, Mori Costantino has also helped campaign for multiple Democratic candidates and volunteered her time and efforts to the Johnson County Democrats.

Lillie Virginia Harper (1929-1997) was born in Fort Madison, Iowa. Harper studied at the State University of Iowa (now the University of Iowa) for three years, at Howard University, and graduated from the College of Medical Technology in Minneapolis. She was an x-ray technician and medical assistant in her family’s clinic until it closed in 1977. In 1946, when only twenty African-American women were enrolled at the University of Iowa, Harper was one of the five chosen to live on campus, in Currier Hall.

In 1971 Governor Robert Ray appointed Harper the first African-American woman to serve on the state Board of Public Instruction. In that position she worked towards instituting a human relations course requirement for teachers. In 1979 she was the first Black woman appointed to the Iowa Board of Parole. In 1978 Harper was president of the Fort Madison branch of the National Association for the Advancement of Colored People (NAACP). Her other civic activities included work as a volunteer at the Fort Madison penitentiary and as a member of both the Fort Madison Human Rights Commission and the Library Board of Trustees. In 1992 Harper was inducted into the Iowa Women’s Hall of Fame in recognition of her commitment to equal rights.

Corita Kent (1918–1986) was an artist, educator, and advocate for social justice. At age 18 she entered the religious order Immaculate Heart of Mary, eventually teaching in, and then heading up, the art department at Immaculate Heart College. Her work evolved from figurative and religious to incorporating advertising images and slogans, popular song lyrics, biblical verses, and literature. Throughout the ‘60s, her work became increasingly political, urging viewers to consider poverty, racism, and injustice. In 1968 she left the order and moved to Boston.

After 1970, her work evolved into a sparser, introspective style, influenced by living in a new environment, a secular life, and her battles with cancer. She remained active in social causes until her death in 1986. At the time of her death, she had created almost 800 serigraph editions, thousands of watercolors, and innumerable public and private commissions. Her works are held in the Stanley Museum of Art as well as in Iowa Women’s Archives.

Be sure to check out the exhibit through the end of August in Special Collections & Archives Reading Room, located on the 3rd floor of the Main Library.