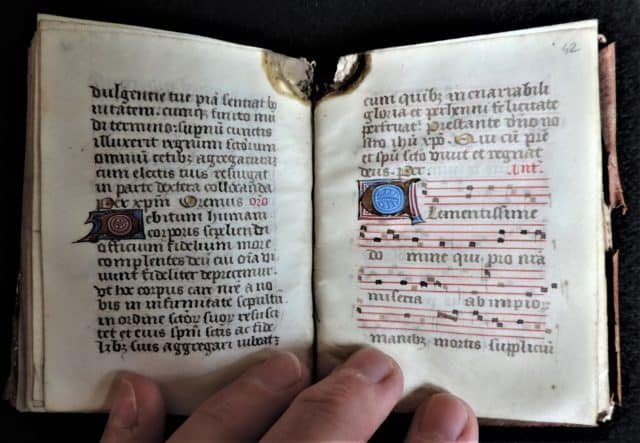 The following comes from Book and Maps Curator, Eric Ensley

A perennial question for students of the Middle Ages is how and what did women read. The newest addition to our collection of medieval manuscripts answers this question at least in one place and moment. This diminutive book from the first half of the sixteenth century was designed to be carried by the nuns of the royal and aristocratic Dominican Abbey of Poissy, just outside of Paris. Small books of music and prayer like this comprise a genre known as the “Poissy Processional,” of which around thirty are known to exist. University of Iowa’s volume is a previously unknown addition to these thirty.

Processionals are a type of book that contain the music and words necessary to chant the complicated and varying processions that accompany the Catholic Mass and the repeating daily prayers known as the Office. The nuns of Poissy would have need for books like these as a large portion of their day was given over to prayer—nearly around the clock as the Matins prayers occurred at around 2am and Lauds around dawn. Nuns would make processions with these books, singing from them as they went. Each sister had her own book and it is perhaps unsurprising then that they would be passed down to family members and friends as heirlooms.

The Abbey of Poissy was built starting in 1304 on the birthplace of the king and saint, King Louis IX. It was originally opened to only aristocratic families, allowing the abbey to enjoy strong connections with the royal court and become one of the wealthiest abbeys in France. Life for the nuns at Poissy, however, was austere and sheltered, living entirely in the walled abbey where their daily schedule consisted of prayer, silence, more prayer and more silence. Despite the seclusion, the abbey still captured the literary imagination of authors. Famed medieval poet Christine de Pizan placed her daughter in the abbey and even wrote a major poem about it, Le Dit de Poissy. The abbey’s library and books remained intact until the French Revolution, when the group was disbanded and the books sold off or stolen.

University of Iowa’s Processional is fascinating on several levels beyond that it escaped inclusion in Joan Naughton’s 1995 dissertation on the books, which is held at the authoritative source on the topic. This copy went unnoticed likely because the great majority of the thirty other copies are in institutional hands, while ours appears to have come from the library of Jacques Laget, a well-known French bibliophile who retired in the 2000s.

Books were not cheap in the later Middle Ages and even into the early modern period, but the abbey’s connection to France’s wealthier families allowed their library to grow. The book easily fools a viewer with its medieval appearance. Even in the early 1500s, the makers of these books were copying exemplar manuscripts that retained the appearance of fourteenth century books—a real throwback! Some have even argued that the nuns themselves made their own books for the abbey, though this argument is contentious since the books have a look similar to those produced in Paris workshops. Indeed, our little volume includes attractive initials in gold leaf with interior decoration in red and blue pigment and more elaborate penwork initials throughout.

Somewhat unusually, our Processional includes many of the texts and offices that center around the death of a nun and the proper care of soul and body as the end approaches, including: the Office of the Dead, Anointing of the Sick for a Nun, Litany for the Dying, the Office for Burial, and the Commendation for the Dying. Many of the texts include gendered Latin endings suggesting the book should be used by a woman. Likewise, many include rubrics or instructions on what one should do and think while dying or while burying the body of a sister.

We hope the Iowa Processional inspires you to contemplation or singing in the classroom or reading room…quietly. It will be available soon for use under the call number: MSC0542, xMMS.Po1.