This Element explains Nietzsche’s ethics in his late works, from 1886 onwards. The first three sections explain the basics of his ethical theory – its context and presuppositions, its scope and its central tension. The next three sections explore Nietzsche’s goals in writing a history of Christian morality (On the Genealogy of Morality), the content of that history, and whether he achieves his goals. The last two sections take a broader look, respectively, at Nietzsche’s wider philosophy in light of his ethics and at the prospects for a Nietzschean ethics after Nietzsche.

Moral theories can be distinguished, not only by the answers they give, but also by the questions they ask. Utilitarianism’s central commitment is to the promotion of well-being, impartially considered. This commitment shapes utilitarianism in a number of ways. If scarce resources should be directed where they will best promote well-being, and if theoretical attention is a scarce resource, then moral theorists should focus on topics that are most important to the future promotion of well-being. A theme of this Element is that, as times change, the priorities (both practical and theoretical) of utilitarianism also change. Questions that were once theoretical curiosities move centre stage. And themes from earlier utilitarians that have become unfashionable may come to the fore again. Utilitarianism is a living tradition, not an abstract set of timeless principles or a purely historical artefact.

Literary Nonfiction. Art. California Interest. GARDEN PRAYERS: SPRING is the second collection of drawings made at the Rancho Santa Ana Botanic Garden in Claremont and in Cambria, California. These are “still part of the meditation I experience while looking at or experiencing or talking to or wondering about or thinking of these living places,” says artist T.M. Givens.

We are in the midst of a growing ecological crisis. Developing technologies and cultural interventions are throwing the status of “human” into question.

It is against this context that Patricia McCormack delivers her expert justification for the “ahuman”. An alternative to “posthuman” thought, the term paves the way for thinking that doesn’t dissolve into nihilism and despair, but actively embraces issues like human extinction, vegan abolition, atheist occultism, death studies, a refusal of identity politics, deep ecology, and the apocalypse as an optimistic beginning.

In order to suggest vitalistic, perhaps even optimistic, ways to negotiate some of the difficulties in thinking and acting in the world, this book explores five key contemporary themes:
· Identity
· Spirituality
· Art
· Death
· The apocalypse

Collapsing activism, artistic practice and affirmative ethics, while introducing some radical contemporary ideas and addressing specifically modern phenomena like death cults, intersectional identity politics and capitalist enslavement of human and nonhuman organisms to the point of ‘zombiedom’, The Ahuman Manifesto navigates the ways in which we must compose the human differently, specifically beyond nihilism and post- and trans-humanism and outside human privilege. This is so that we can actively think and live viscerally, with connectivity (actual not virtual), and with passion and grace, toward a new world.

With the translation of Lefebvre’s philosophical writings, his stature in the English-speaking world continues to grow. Though certainly within the Marxist tradition, he consistently saw Marx as an ‘unavoidable, necessary, but insufficient starting point’. Unsurprisingly, Lefebvre always insisted on the importance of Hegel to understanding Marx. But the imposing Metaphilosophy also suggested the significance he ascribed to Nietzsche, in the ‘realm of shadows’ through which philosophy seeks to think the world. Lefebvre proposes here that the modern world is at the same time Hegelian in terms of the state; Marxist in terms of the social and society; and Nietzschean in terms of civilization and its values. As early as 1939, Lefebvre pioneered a French reading of Nietzsche that rejected the philosopher’s appropriation by fascism, bringing out the tragic implications of Nietzsche’s proclamation that ‘God is dead’ long before this approach was followed by such later writers as Foucault, Derrida and Deleuze. Forty years later, in the last of his philosophical writings, Lefebvre juxtaposes the contributions of the three great thinkers, in a text whose themes remain surprisingly relevant today.

The Self, Relational Sociology, and Morality in Practice

Providing a theory of moral practice for a contemporary sociological audience, Owen Abbott shows that morality is a relational practice achieved by people in their everyday lives. He moves beyond old dualisms―society versus the individual, social structure versus agency, body versus mind―to offer a sociologically rigorous and coherent theory of the relational constitution of the self and moral practice, which is both shared and yet enacted from an individualized perspective. In so doing, The Self, Relational Sociology, and Morality in Practice not only offers an urgently needed account of moral practice and its integral role in the emergence of the self, but also examines morality itself within and through social relations and practices. Abbott’s conclusions will be of interest to social scientists and philosophers of morality, those working with pragmatic and interactionist approaches, and those involved with relational sociology and social theory.

The Science of Generosity

This book advances understanding of the manifestations, causes, and consequences of generosity. Synthesizing the findings of the 14 research projects conducted by the Science of Generosity Initiative and offering an appendix of methods for studying generosity, this comprehensive account integrates insights from disparate disciplines to facilitate a broader understanding of giving―ultimately creating a compendium of not only the latest research in the field of altruistic behaviors, but also a research roadmap for the future. As the author sequentially explores the manifestations, causes, and consequences of generosity, Patricia Snell Herzog here also offers analyses ranging from the micro- to macro-level to paint a full picture of the individual, interpersonal and familial, and collective (inter)actions involved in altruism and generosity. The author concludes with a call to stimulate further interdisciplinary generosity studies, describing the implications for emerging scholars and practitioners across sociology, economics, political science, religious studies, and beyond.

This book reconstructs the history of a group of British Quaker families and their involvement in the process of settler colonialism in early nineteenth-century Australia. Their everyday actions contributed to the multiplicity of practices that displaced and annihilated Aboriginal communities. Simultaneously, early nineteenth-century Friends were members of a translocal, transatlantic community characterized by pacifism and an involvement in transnational humanitarian efforts, such as the abolitionist and the prison reform movements as well as the Aborigines Protection Society. Considering these ideals, how did Quakers negotiate the violence of the frontier? To answer this question, the book looks at Tasmanian and South Australian Quakers’ lives and experiences, their journeys and their writings. Building on recent scholarship on the entanglement between the local and the global, each chapter adopts a different historical perspective in terms of breadth and focused time period. The study combines these different takes to capture the complexities of this topic and era.

The Joy of Religion 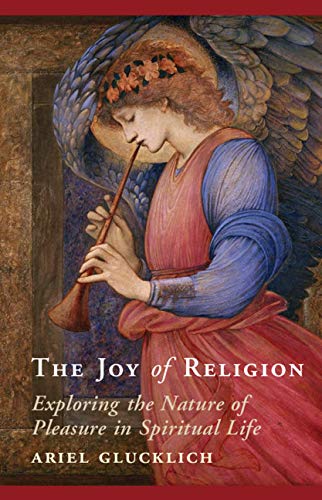 All religions describe spiritual experience as pleasant, and the goal of the religious pursuit as profoundly joyful. But many religions also condemn sensory pleasures and the desire for objects of pleasure. In this book, Ariel Glucklich resolves this apparent contradiction by showing how religious practices that instill self-control and discipline transform one type of pleasure into the pleasures of mastery and play. Using historical data and psychological analysis, he details how the rituals, mystical practices, moral teachings, and sacred texts of the world’s religions act as psychological instruments that induce well-being. Glucklich also shows that in promoting joy and pleasure, religion also strengthens social bonds and enhances an individual’s pursuit of meaning.