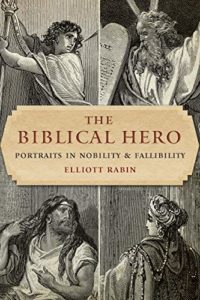 Approaching the Bible in an original way—comparing biblical heroes to heroes in world literature—Elliott Rabin addresses a core biblical question: What is the Bible telling us about what it means to be a hero?

Focusing on the lives of six major biblical characters—Moses, Samson, David, Esther, Abraham, and Jacob—Rabin examines their resemblance to hero types found in (and perhaps drawn from) other literatures and analyzes why the Bible depicts its heroes less gloriously than do the texts of other cultures:

* Moses founds the nation of Israel—and is short-tempered and weak-armed.
* Samson, arrogant and unhinged, can kill a thousand enemies with his bare hands.
* David establishes a centralized, unified, triumphal government—through pretense and self-deception.
* Esther saves her people but marries a murderous, misogynist king.
* Abraham’s relationships are wracked with tension.
* Jacob fathers twelve tribes—and wins his inheritance through deceit.

In the end, is God the real hero? Or is God too removed from human constraints to even be called a “hero”?

Ultimately, Rabin excavates how the Bible’s unique perspective on heroism can address our own deep-seated need for human-scale heroes. 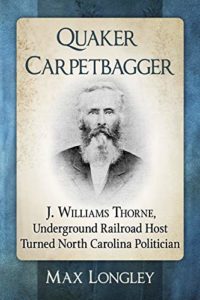 J. Williams Thorne (1816-1897) was an outspoken farmer who spent the first half-century of his remarkable life in Chester County, Pennsylvania, where he took part in political debates, helped fugitive slaves in the Underground Railroad and was active in the Progressive Friends Meeting, a national group of activist Quakers and allied reformers who met annually in Chester County. Williams and his associates discussed vital matters of the day, from slavery to prohibition to women’s rights. These issues sometimes came to Thorne’s doorstep–he met with nationally prominent reformers, and thwarted kidnappers seeking to enslave one of his free black tenants.
After the Civil War, Williams became a “carpetbagger,” moving to North Carolina to pursue farming and politics. An “infidel” Quaker (anti-Christian), he was opposed by Democrats who sought to keep him out of the legislature on account of his religious beliefs. Today a little-known figure in history, Williams made his mark through his outspokenness and persistent battling for what he believed.

Nietzche’s Human, All Too Human : a critical introduction and guide 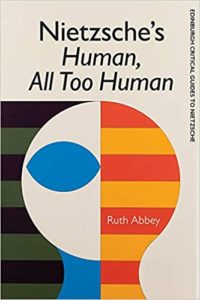 Human, All Too Human marks the beginning of what is often called Nietzsche’s middle or positivist period (which ends with the conclusion of Book IV of The Gay Science). It initiates some important features that become permanent in his work, such as his experiments in multiple writing styles within one work, his self-representation as a psychologist, his genealogical excavations of morality and his appeal to fellow Europeans to overcome the parochialism and antagonism of nationalism. Ruth Abbey shows Nietzsche to be more receptive to the Enlightenment tradition than he is typically taken to be. She assumes no knowledge of the text or of Nietzsche. She maps her chapters onto those of Nietzsche’s text, allowing you to read the guide alongside the book. Altogether, she opens up Human, All Too Human for new readers, while more experienced Nietzsche scholars will appreciate the new perspective.

The Realm of Facts : aspects of philosophical realism 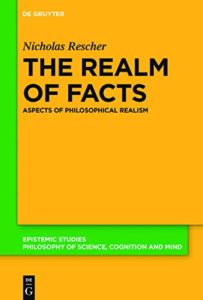 Knowledge of facts is essential for the management of life. Most studies of the subject examine how we go about trying to obtain it; they describe the processes and proceedings of rational inquiry. The present work steps back from this to inquire into the limits and limitations of such processes and to identify the assets and the limitabilities of what they are able to supply for us. It examines how knowledge of facts is secured and consolidated as such, and what the resulting information can and cannot provide. It argues that the unavoidable incompleteness of our factual information also endows it with an element of incorrectness. By looking also at the negative side of human inquiry the book’s perspective clarifies the nature of our grip on the facts that constitute our view of the reality of things. 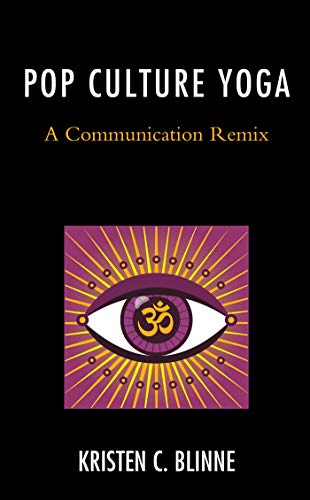 Pop Culture Yoga: A Communication Remix was born out of a series of questions about the paradoxical nature of yoga: How do individuals and groups define yoga? What does it mean to “practice yoga,” and what does this practice involve? What are some of the most important principles, guidelines, or philosophical tenets of yoga that shape people’s definitions and practices? Who has the power and authority to define yoga? What are the limits, if any, of shared definitions of yoga? Kristen C. Blinne explores the myriad ways “yoga” is communicatively constructed and defined in and through popular culture in the United States. In doing so, Blinne offers insight into the many identity work processes in play in the construction of yoga categories, illuminating how individuals’ and groups’ words and actions represent practices of claiming—part of a complex communicative process centered around membership categorization—based on a range of authenticity discourses. Employing popular culture writing styles, Blinne ultimately contends that the majority of yoga styles practiced in the United States are remixes that can be classified as pop culture yoga, a distinct way of understanding this complex phenomenon.

Doing the Work of Comparative Theology 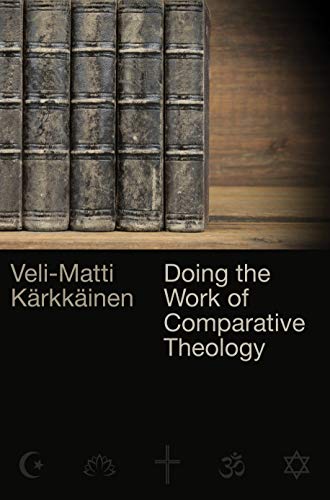 In a world that is more religiously diverse than ever before, our coworkers and neighbors may well be adherents of other faiths. But how many of us really grasp the similarities and differences between the major world religions? Comparative theology is one increasingly important way to bridge this gap, especially for Christian leaders and professors, but also for lay people and students.

Veli-Matti Kärkkäinen introduces the nature and work of comparative theology, then delves into a detailed doctrine-by-doctrine comparison of Christian teachings with those of historical and contemporary Judaism, Islam, Buddhism, and Hinduism. With every doctrine, he first presents a summary of consensual Christian belief and then orients the reader to the distinctive teachings of other faith traditions, highlighting parallels and differences.

Ideal for students, ministers, instructors, and lay people interested in interfaith dialogue, Doing the Work of Comparative Theology distills the comparative-theological rigor of Kärkkäinen’s Constructive Christian Theology for the Pluralistic World series into an accessible and user-friendly textbook. Readers will not only learn basic methodology but also begin to undertake the actual work of comparative theology.

Rabbi On The Ganges : a Jewish-Hindu encounter

Rabbi on the Ganges: A Jewish-Hindu Encounter is the first work to engage the new terrain of Hindu-Jewish religious encounter.

The book offers understanding into points of contact between the two religions of Hinduism and Judaism. Providing an important comparative account, the work illuminates key ideas and practices within the traditions, surfacing commonalities between the jnana and Torah study, karmakanda and Jewish ritual, and between the different Hindu philosophic schools and Jewish thought and mysticism, along with meditation and the life of prayer and Kabbalah and creating dialogue around ritual, mediation, worship, and dietary restrictions. The goal of the book is not only to unfold the content of these faith traditions but also to create a religious encounter marked by mutual and reciprocal understanding and openness.

Exploring the Isaiah Scrolls and Their Textual Variants

In Exploring the Isaiah Scrolls and Their Textual Variants, Donald W. Parry systematically presents, on a verse-by-verse basis, the variants of the Hebrew witnesses of Isaiah (the Masoretic Text and the twenty-one Isaiah Dead Sea Scrolls) and briefly discusses why each variant exists. The Isaiah scrolls have greatly impacted our understanding of the textual history of the Bible, and in recent decades, Bible translation committees have incorporated a number of the variants into their translations; as such, the Isaiah scrolls are important for both academic and popular audiences. Variant characterizations include four categories: (a) accidental errors, e.g., dittography, haplography, metathesis, graphic similarity; (b) intentional changes by scribes and copyists; (c) synonymous readings; (d) scribes’ stylistic approaches and conventions.

Lebanon: The Rise and Fall of a Secular State Under Siege

Why has secularism faced such challenges in the Middle East and in Lebanon in particular? In light of dominating headlines about the spread of sectarianism and the so-called death of Arab secularism, Mark Farha addresses the need for a thorough examination of the history of secular thought and practice in the region. By offering a comprehensive, systematic account of the underlying ideological, socio-economic, and political factors involved, Farha provides a new understanding of the historical roots of secularism as well as the potential causes for the continued resistance a fully deconfessionalized state faces both in Lebanon and in the region at large. Drawing on a vast corpus of primary and secondary sources to examine the varying political parties and ideologies involved, this book provides a fresh approach to the study of religion and politics in the Arab world and beyond.