Around this date in 1910, Iowa women were tying on their driving scarves, preparing to motor off to the women’s suffrage state convention in Corydon. While their efforts to pass statewide legislation ultimately failed, Iowa women kept rallying, and eventually received the right to vote in 1920 through the passage of the 19th amendment to the U.S. Constitution.

The Iowa Women’s Archives and University of Iowa Libraries marked Women’s Equality Day—August 26th—by unveiling a new digital collection documenting the decades-long campaign by Iowa women to gain the right to vote. The Women’s Suffrage in Iowa Digital Collection is the culmination of a yearlong project to select and scan photographs, letters, and other primary sources from the University Libraries, the State Historical Society of Iowa, and Iowa State University’s Special Collections Department.  This collection is now available through the Iowa Digital Library and can be found here.  It offers researchers, teachers, students, historians, and genealogists a centralized starting point for further investigation into this significant period in Iowa’s history. 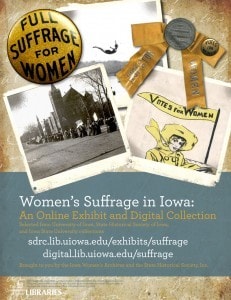 “This is a great example of the power of digitization.  “Women’s Suffrage in Iowa” brings together documents scattered through collections in the Iowa Women’s Archives and at other institutions and makes them available to a wide audience within and beyond the borders of Iowa,” said IWA curator Kären Mason.   “We hope the digital collection will entice Iowans to visit the Iowa Women’s Archives, the State Historical Society, or Iowa State. Since we were only able to include a fraction of the rich suffrage collections in Iowa there are many treasures yet to be uncovered.”

In addition, the Iowa Women’s Archives has created an online exhibit that provides a brief introduction to Iowa’s suffrage history and points to local and state suffrage resources including websites, print materials, personal collections, newspaper archives, and contacts in various counties.  The exhibit “Iowa’s Suffrage Scrapbook: 1854-1920” is accessible at http://sdrc.lib.uiowa.edu/exhibits/suffrage/. Among the digitized items is sheet music for a song written by Helen Cowles LeCron as Iowa geared up for a statewide referendum on women’s suffrage  in 1916:

“When Suffrage Takes the Hawkeye State” by Helen Cowles LeCron

Alas, the optimism of these lyrics was not borne out.  The suffragists’  hopes were dashed in what was generally viewed as a corrupt election, heavily influenced by the liquor interests that feared a female electorate would bring about prohibition.  Iowa women had to wait another four years to vote, until the 19th Amendment to the US Constitution was ratified on August 26, 1920.  A map showing “irregularities” in the 1916 referendum and hundreds of other documents are now available online, thanks to a grant from the State Historical Society, Inc.

“By presenting the exhibit in the form of a scrapbook, we tried to evoke the feeling of doing historical research, paging through an old volume looking for clues to what people thought and did as they fought for the vote,” said Christine Mastalio, a graduate student in the University of Iowa’s School of Library and Information Science who created the exhibit and digital collection with another SLIS student, Kayla Pollock.

The Iowa Women’s Archives holds manuscript collections that chronicle the lives and work of Iowa women, their families, and their communities. These personal papers and organizational records date from the nineteenth century to the present. Together with oral histories, they document the activities of Iowa women throughout the state and beyond its borders. The Iowa Women’s Archives is open to the public and located on the third floor of the University of Iowa’s Main Library. Questions may be directed to lib-women@uiowa.edu or to staff at 319-335-5068. Or find the Archives on Facebook at  http://www.facebook.com/#!/IowaWomensArchives