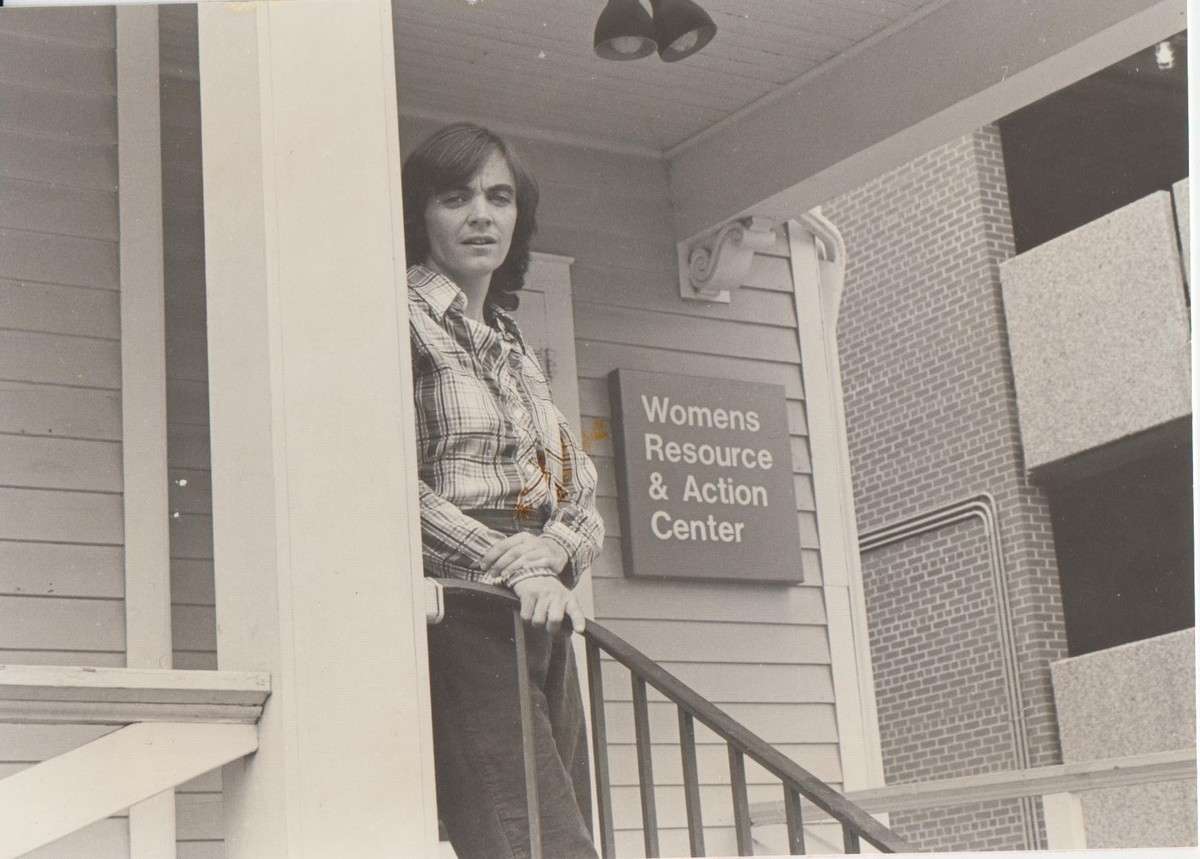 “We will meet all of us women of every land. We will meet at the center, make a circle. We will weave a world we to entangle the powers that bury our children.” — cover art for WRAC’s December 1978 newsletter

Iowa City’s Women’s Resource and Action Center (WRAC) opened in 1971 as a place for women to meet about and organize around issues that mattered to them. With support from the University, members of WRAC hosted a rape crisis line, formed anti-racism organizations, and kept track of local LGBT friendly businesses and housed dozens of discussion and support groups for women from all walks of life.

for discussion and support groups, and opinion pieces on issues important to women. Newsletters also frequently included feminist poetry, such as “A Feminist Prayer,” printed in a 1975 issue.

WRAC, still on the UIowa campus, recently moved to a new, bigger location. If you would like to tour WRAC, it will be hosting a reception this Friday, July 14th, at 6pm as a part of the Iowa City Feminist Reunion.

This post was written by Jessica Lawson, Graduate Research Assistant in the Iowa Women’s Archives.

The Iowa Women’s Archives had an exciting visit at the end of July! Five women who were active in the feminist community in Iowa City in the 1970s and were early supporters of the Emma Goldman Clinic for Women visited the archives.  Dale McCormick, Sondra Smith, Gayle Sand, Barb Yates, and Francie Hornstein reunited to look through this feminist health clinic’s records and share memories of its early days. The Emma Goldman Clinic (fondly known as “Emma”) is a not-for-profit healthcare and family planning provider whose records are housed at the Archives.  Barb Yates was a “founding mother” of Emma, along with Ginny Blair, Robin Christensen, Melissa Farley, Diane Greene, Darca Nicholson, Deb Nye, Patty Pressley, Carmen Salas, and Roxie Tullis.

The collections we brought out for our visitors and the stories they shared reflect the rich interconnections among women’s organizations and social justice movements in Iowa City in the 1970s. In addition to the material in the Emma Goldman Clinic Records themselves, the history of the clinic is woven through the personal papers of two of the visitors (Dale McCormick and Sondra Smith), as well as other local activists like Jill Jack and Linda Yanney and organizations such as the Women’s Resource and Action Center (WRAC). The women laughed as they told stories about staging a feminist revision of Taming of the Shrew, proudly compared their work on Ain’t I a Woman (the newsletter of the Iowa City Women’s Liberation Front) to the work of women’s groups in New York City in the 1970s, and paused to celebrate the memory of Iowa Women’s Archives co-founder Louise Noun. They even found time to help us identify some of the faces in the old photographs.

Iowa City was a hotbed of women’s liberation in the 1970s, boasting women’s restaurants, coffeehouses, presses, bookstores, childcare centers, publications, and health clinics.  The Women’s Liberation Front in Iowa City left many lasting legacies, among them the Women’s Resource and Action Center, which is celebrating its 40th anniversary this academic year.

In 1971 Iowa City women opened a women’s center in a Quonset hut leased from the University, creating a space where women could socialize, learn skills, get health information, and receive assistance with legal issues, among other things. A few months later the Women’s Center moved into a house on East Market Street. The Center was renamed the Women’s Resource and Action Center in 1974 and settled into its current home at 130 North Madison in 1976.

On Friday, March 23rd at 4:00 p.m. the Iowa Women’s Archives will host a panel of women who were active in the early years of WRAC.  The panelists will recall their involvement with childcare, abortion referral, the Iowa City Women’s Press, women’s softball, and other offshoots of the Women’s Center. We invite others who recall WRAC through the years to join in the conversation.  Come for a lively discussion and a piece of birthday cake!