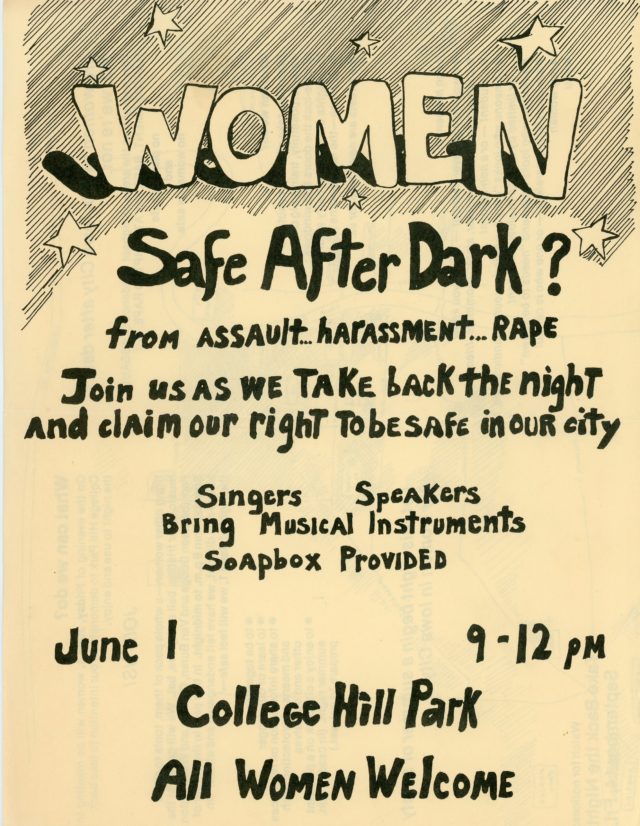 On September 12, 1979, an advertisement for a rally appeared in the campus newspaper, the Daily Iowan. The outline of a woman with bows and arrows, shooting into the night sky was accompanied with the promise, “Friday evening at 8 p.m., the women of Iowa City will have a chance to support each other in a move to reclaim the freedom that comes from being unafraid.” September 14th, 1979 would be Iowa City’s first major Take Back the Night Rally. The rally inspired hundreds of women to attend, spawned weeks of angry debate in the Daily Iowan, and started a tradition of rallies against sexual violence in Iowa City that continues over forty years later.

The term Take Back the Night had been coined just two years earlier in 1977 when activist Anne Pride used it as the title of a memorial at an anti-violence rally in Pittsburgh, Pennsylvania. The phrase became a rallying cry for women sick of being afraid to walk alone at night and tired of rapists getting away with their crimes. The movement spread quickly, and by the summer of 1979, Iowa City had already had one small rally protesting a local spike in violence against women. After this, Iowa City women formed a committee, supported by the University’s Women’s Resource and Action Center, to plan a larger rally “for women to assert their right to safety on the streets and in their homes.”

The rally took place from 8:00 to 10:00 pm at College Green Park, near the downtown, which had become a hot spot for rape, attempted rape, and sexual harassment. The Rape Victim Advocacy Program provided maps of the area to attendees marking over 100 reported incidences of sexual violence from January 1978 to March 1979.

In response to this reality, Take Back the Night’s schedule had strong themes of education, self-expression, and self-defense. The planning committee included other organizations like a local chapter of NOW and the Rape Victim Advocacy Program and the University of Iowa’s Taekwondo Club to provide self-defense tactics to women in attendance. Local artists also inspired attendees with songs like “Fight Back” by Holly Near with powerful lyrics:

“Some have an easy answer

Buy a lock and live in a cage

But my fear is turning to anger

And my anger is turning to rage

In an event full of rage, perhaps the most infuriating part was a play: “Rape on Trial.” The scene was set as a courtroom with judge, lawyers, and jury. The victim took the stand, detailing a truly awful crime in which a rapist broke into her home and force himself upon her. The characters framed her as an unreliable witness, criticizing her actions like wearing a nightgown and sleeping with the window open on a hot day, while the rapist was valorized for his civic engagement, career, and status as a father. The audience was then privy to the jury’s deliberations during which the jurors say “I think she’s lying,” and “I don’t think that we should ruin this poor man’s life or his whole career for that matter.” The jury found him not guilty. For the women watching, it must have been an emotional, angering experience.

The first major Take Back the Night rally in Iowa City was a success with an attendance of about 500 women, over 300 of which stayed to march after the rally. However, the coverage after the event hinged on something else entirely: the committee’s decision to make Take Back the Night a women’s-only event. Men who approached College Green Park on the night of September 14th were approached by groups of women and given cards stating: “Given the nature of rape and sexual abuse, the presence of men here will make some women uncomfortable. Men sensitive to this issue will demonstrate their concern by not attending this rally which has been organized by women for women. Thank you for your cooperation.” The Rape Crisis Line sponsored an alternate event for men who supported Take Back the Night at the Wesley House downtown.

The women handing out cards were described by some as “guards” and by others as “para-military.” One person even complained to the police.  On September 17th the Daily Iowan published an editorial by Michael Humes title “Taking Back Everyone’s Night.” Humes recognized that the rally did let men stay after receiving the card, but then complained about the “exclusionary intent” and accused Take Back the Night of “identifying all men with rapists.” Over the next two weeks, Take Back the Night’s supporters, the Humes camp, and many others in the middle consumed the Daily Iowan’s editorial page with a debate over whether the rally’s planners had been unfair to men. As Jane Vanderbosch insightfully said her letter to the editor, “It is somewhat ironic to realize that Humes’ ‘rage’ was not ‘denied.’ It covered a good portion of the editorial page, as did his ‘possible resentment.’ Neither the rage nor resentment of the 500 women who attended the rally was given much coverage.” 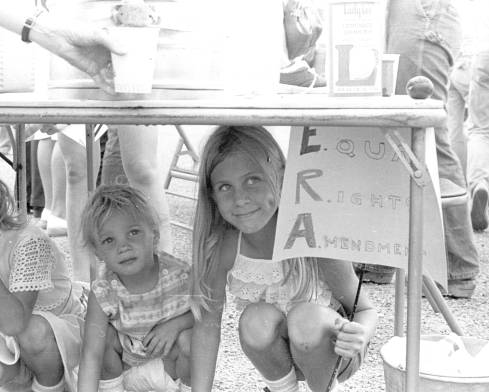