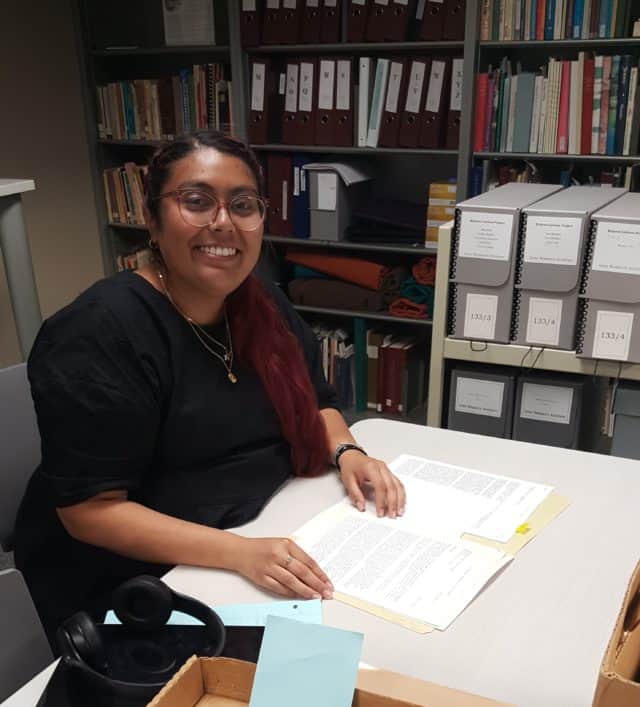 After the pandemic postponed her research trip, Yazmin Gomez, the 2020 Linda and Richard Kerber Travel Grant recipient, finally made it to IWA! Linda Kerber, May Brodbeck Professor in the Liberal Arts and Professor of History Emerita, and her husband Richard founded this grant to help researchers, especially graduate students, travel to the Iowa Women’s Archives. Thanks to the Kerbers, IWA can award $1000 every year to a promising researcher like Gomez, whose work would benefit from travelling to Iowa and using IWA’s collections for an extended period.

Gomez, graduate student from Rutgers University is focusing her dissertation research on the labor and educational activism of Latinas in the Midwest. Her work has been years in the making. As an undergraduate at Marquette University, she enrolled in the Ronald E. McNair Post Baccalaureate Achievement Program, aimed at helping first generation students and students from underrepresented groups prepare for graduate school. It was her first taste of independent research and archival work. By the time she’d finished her senior thesis, “Viva La Raza, Viva Las Latinas: Late 20th Century Female Activism in Milwaukee’s Latinx Community” she knew she wanted to keep studying Latina activism at Rutgers.

At IWA, Gomez is seeking to broaden the scope of the research she did on Latina activism in Wisconsin to include a larger picture of the Midwest. She believes that the region, though it has a smaller Latinx population than other areas of the US, has greater internal diversity within its Latinx communities that has created a unique situation for activism. She’s particularly interested in the intersection of gender and race among the Latinas she has studied. “They weren’t exactly Gloria Steinem, women’s liberation feminists, their activism was community-based,” Gomez said. They were focused on things like unionizing and expanding the role of women in established organizations like the League of United Latin American Citizens (LULAC).

Using collections like the League of United Latin American Citizens (LULAC) Council 10 (Davenport, Iowa) records, the Shirley Sandage papers and the Mujeres Latinas Oral Histories Project, Gomez is searching for connections and common themes shared by the dynamic community of Latinas she found in Milwaukee and Iowa. She’s found some promising materials on the shelves at IWA. For instance, while looking at some Migrant Action Program reports from Iowa she recognized the name of a Wisconsin activist she’d encountered before, who had helped to fund the report in another state.

She’s also finding connections to other civil rights activists and battles. The oral history of Mary Campos, whose work on behalf of Latinx people in Iowa earned her a place in the Iowa Women’s Hall of Fame, introduced her to a wider web of activism. Campos worked for a Dr. Griffin, the husband of civil rights activist Edna Griffin, known for her fight to desegregate Katz Drug Store in Des Moines. Reading Griffin’s FBI file, Gomez found a familiar story in how female activists of the mid 20th century were underrated. Even the government agents assigned to trail Griffin didn’t understand why they were following “just a housewife.”

Aside from the connections to her own research, Yazmin Gomez has enjoyed finding personal items in the collections she’s seen mixed in with community activism. While learning about Cesar Chavez’s visit to Iowa, she might see a graduation cap and tassel, photographs of a first communion, or her favorite, a newspaper clipping about a local man who grew a potato that looked kind of like an elephant. By encountering items like these in the Archives, Gomez has been able to spend the last two weeks in IWA immersing herself in the lives and community networks of Latinas over 50 years ago. She’s excited to take what she’s learned back to Rutgers as she moves closer to a PhD.