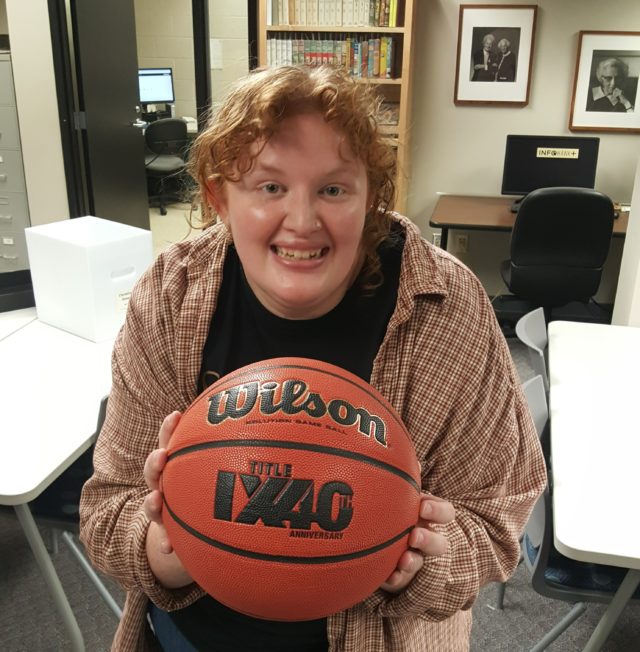 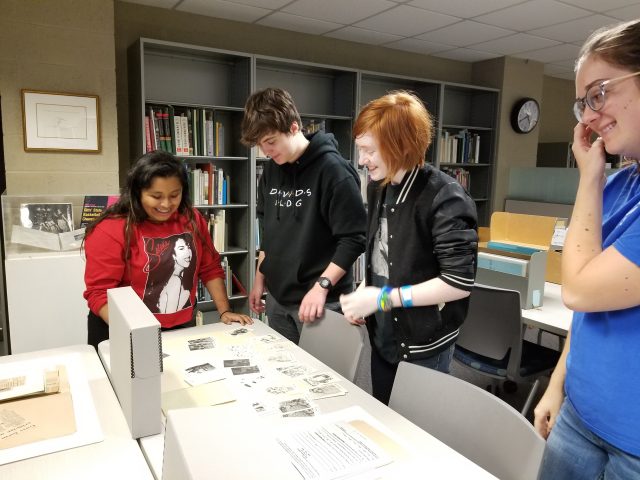 During LGBTQ History Month in October 2018, I worked with the Iowa Women’s Archives and University Special Collections to organize an archives visit for students from West Liberty High School.  The several students who were able to attend are members of the school’s Gay-Straight Alliance (GSA), a student organization that provides a safe and supportive environment for LGBTQ youth and their cisgender heterosexual allies and raises awareness on campus about LGBTQ issues.  The group’s faculty advisor, Katlyn Clark, has been teaching English at West Liberty High School for three years and is also enrolled in an English Education MA program at University of Iowa.  I first became aware of this important student group when Katlyn was enrolled in my Sexuality in the U.S. course during Summer 2018.  Her independent research project explored the importance of GSAs and the need to continue to develop more inclusive programming and pedagogy in the high school environment.

LGBTQ History Month seemed like the perfect opportunity to introduce these students to some of the amazing archival records at UI that document the history of local LGBTQ activism.  I relied on the expertise of archivists Kären Mason, Janet Weaver, Anna Tunnicliff, and David McCartney to pull together some of the most interesting and engaging materials from relevant collections.  When students arrived, they found a smorgasbord of documents and artifacts, including issues of the feminist journals Ain’t I a Woman and Better Homes and Dykes; correspondence and newspaper clippings related to “Rusty” Barcelo’s LGBT activism; and records from the Gay Liberation Front, one of the first student groups of its kind in the country.  Students also had fun exploring “Spinster,” a feminist and lesbian reimagining of the “Old Maid” card game, printed by the Iowa City Women’s Press.  David McCartney introduced our visitors to  the amazing timeline of Iowa City queer history that he and Kären Mason created for the outhistory.org project several years ago.

Reflecting on their visit, high school senior Miguel Solis wrote that, “… most people’s knowledge of LGBTQ+ history is mainly the Stonewall Riots and the AIDS crisis.  Iowa actually has a large history for the LGBTQ+ community that most people do no not know about. … I learned [that] the very first form of ‘Pride’ in Iowa was a last-minute float in the Iowa homecoming parade.”  Senior Dio Gonzales described their visit to the university as “an eye-opening experience. … My favorite part was being able to go around and see different kinds of posters, books, and magazines that were released.”  In contrast to the usual hushed environment of the library, we encouraged students to talk and wander around the reading room to get a feel for different kinds of materials.  Our conversations led Librarian Anna Tunnicliff to bring out a few boxes from the unprocessed collection of Miranda Welch, a student activist from small-town Iowa.  Among the papers and artifacts was Welch’s high school graduation cap, bedecked in pride-colored ribbons and gems.

In preparing for their visit, Katlyn Clark mentioned that the students were especially interested in transgender history.  But the nature of archive collection practices and typical end-of-life donations means that IWA and Special Collections currently have very little material on this relatively contemporary topic.  That archival silence created an opportunity to talk about what it would mean to try to build a transgender archive and to document the experiences and activism of LGBTQ people today.  Aiden Bettine, a History Ph.D. student, joined us to talk about their current project, the Transgender Oral History Project of Iowa (TOPI).  As Aiden explained, “A primary goal of the project is to empower transgender and gender non-conforming communities to collect and preserve their own histories by training trans-identified people in the methodology of oral history.”  Students later commented that learning about TOPI’s goals was a very important part of their experience at the archives.

On the day of their visit, our discussion about creating a transgender archive offered a perfect segue to talking about how students in the Gay-Straight Alliance could start to record and preserve their own history of activism.  Since the club’s official recognition in 2017, they have successfully campaigned for the creation of a gender-inclusive restroom on their campus and, every year, they organize school-wide participation in the Day of Silence, a national event that brings attention to anti-LGBTQ bullying in schools.  Members of the group have attended leadership workshops at the GSA Conference in Des Moines and they regularly attend the annual Governor’s Conference on LGBTQ Youth.  I wanted to encourage the students to think about themselves as important historical actors whose activities deserved to be documented and preserved.  I hoped that showing them the records of other student organizations at UI would help them recognize that the work of student groups like theirs was important and would be valuable to researchers and other activist groups in the future.  We also talked about ways to build their archive, such as writing down the narrative of how the group was founded and keeping records of their members, group meetings, and specific events and activities.  Katlyn reports that since their visit last fall, students in the GSA have talked about creating a twice-a-year newsletter to record their activities.  Reflecting on our discussion in the IWA reading room, Miguel Solis wrote, “We really just need to keep trying to make a change and leave our mark on the school so that one day we can be remembered in history and be talked about as people who made a difference.”

A special thanks to Kären, David, Anna, Janet, and Aiden for their help with this!  And to Katlyn Clark, C. Blick, Jacqueline Castillo, Dio Gonzalez, Angie Meraz, Mary Norris, and Miguel Solis for joining us and sharing the amazing work they are doing in West Liberty.  Hope to see them on campus as official Hawkeyes in the years to come – the future is very bright!