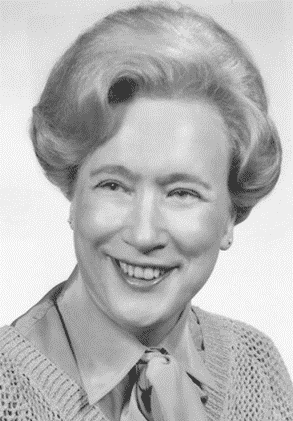 This post is by IWA Graduate Assistant Erik Henderson

Taking a risk can be one of the most difficult things you must do. However, how would it feel knowing that you cannot fail no matter what you do? One thing that holds us back in life is our clouded judgment when making a major move. Mary Grefe pushed herself and others to go for things they want and dream big by creating opportunities for young women to branch out into technical and scientific careers.

Mary Arlene Cruikshank Grefe was an educator, social activist, politician, and businesswoman. Grefe grew up on her family’s farm in the Algona area and graduated from Morningside College with a B.A. in English and Speech in January 1943. Grefe had been active in the women’s movement for many years through her involvement with the Educational Foundation of the American Association of University Women (AAUW).

Grefe was the national president of the AAUW from 1979 to 1981 and the AAUW Educational Foundation president. A few years prior, Grefe published articles relating to adult education, leadership techniques, the women’s movement, and a leadership manual with Claire Fulcher titled Techniques for Organizational Effectiveness (1973).

Within the Mary Grefe papers, there is a speech titled “What Would You Attempt To Do If You Knew You Could Not Fail?” She gave the speech for Career Conference, “The Road Less Traveled,” on October 13th, 1994, because Iowa State University (where the conference was hosted) wanted to break the stereotype that young women had to get pushed down a path of “gendered work.” She said they could cross over into other fields as well with a little “self-esteem and confidence…a person with self-esteem and confidence is halfway to any goal” The point of the speech for Grefe was to push back against the idea of gendered work while suggesting that young women can build a career in fields like math and science.

Many people, myself included, do not want to take risks because they are worried about what other people will think about them, and they stay in their comfort zone. Grefe stated, “as parents, we have to encourage our children to get out of the comfort zone. When your child fell off the bike the first time, did you say soothingly, it is too hard for you, let’s put the bike away and go back to the same and comforting tricycle? You know that you did not.” Grefe’s example of a young child trying to ride a bike for the first time and falling shows us we need to be consistent in the endeavors we are pursuing. We cannot give up or quit the first time we try something new because it does not go our way. What we should do is “remember that we are role models. Someone is watching to see how we handle crises.” Every day we are faced with temptation and fear. For young women and men coming up, they need a person to look to for motivation when things get tough. Having that role model works as a refresher to know that you can slip, but you will be able to get back up to keep going!

Though Grefe was committed to progressing the women’s movement, she was just as committed to education. In her early career, she taught high school, a junior college, then served twelve years on the Des Moines school board, twice as president. In 1972, President Richard Nixon appointed her as his personal representative to the UNESCO World Conference on Adult Education in Tokyo, Japan. President Gerald Ford appointed her to the National Advisory Council on Adult Education beginning in 1974 and was its chair in 1976. Grefe was inducted into the Iowa Women’s Hall of Fame in 1980.