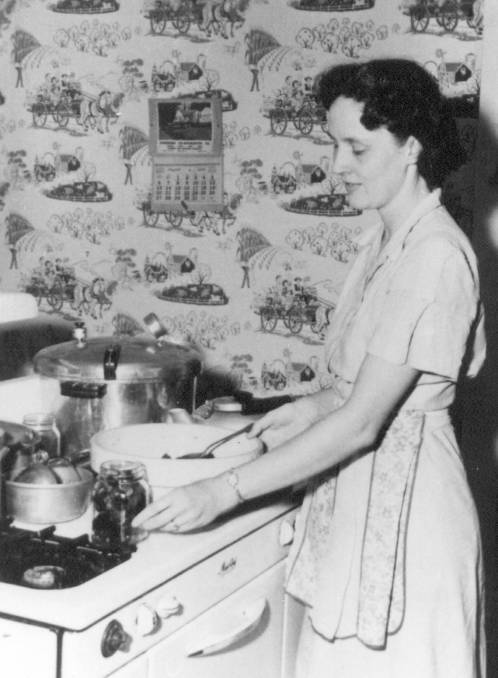 This post was originally written by Jen Wolfe, Digital Scholarship Librarian, for the UI Libraries Digital Research & Publishing Blog. It is re-posted here with minor modifications.

University of Iowa faculty, students, and staff discussed a curriculum project that combines historic documents with digital tools and methods as part of the Irving B. Weber Days local history celebration. The one-hour presentation “Archives Alive!: Teaching with WWII Correspondence” took place on Wednesday, May 7 at the Iowa City Public Library.

Iowa Women’s Archives Curator Kären Mason provided background on the IWA and its mission to chronicle the history of Iowa women, their families, and their communities by collecting personal papers, organizational records, and oral histories. IWA artifacts on display at the event included a World War II correspondence scrapbook, donated by author and radio personality Evelyn Birkby, upon which the Archives Alive! project was based.

Matt Gilchrist and Tom Keegan, Rhetoric faculty and co-directors of the Iowa Digital Engagement and Learning (IDEAL) initiative, spoke about using digital humanities methods to engage undergraduates through hands-on learning and technologically innovative assignments. For Archives Alive!, they developed a four-week curriculum module that required their Rhetoric students to participate in DIY History, the UI Libraries’ transcription crowdsourcing project. After transcribing, researching, and analyzing digitized correspondence from the Birkby scrapbook, students conveyed their findings in a variety of ways; this includes three-minute video screencasts uploaded to YouTube that form a collection of open-access works of original digital scholarship based on primary sources.

The event also featured presentations by Rhetoric students James Burke, Jessica Graff, and Zach Stark. For those who couldn’t make it in person, “Archives Alive!: Teaching with WWII Correspondence” will be archived at the Iowa City Public Library web site.

The Archives Alive! spring 2014 student works are available on the IDEAL website, and a letter from Evelyn Birkby to the students is included in the IWA Tumblr post about the project.