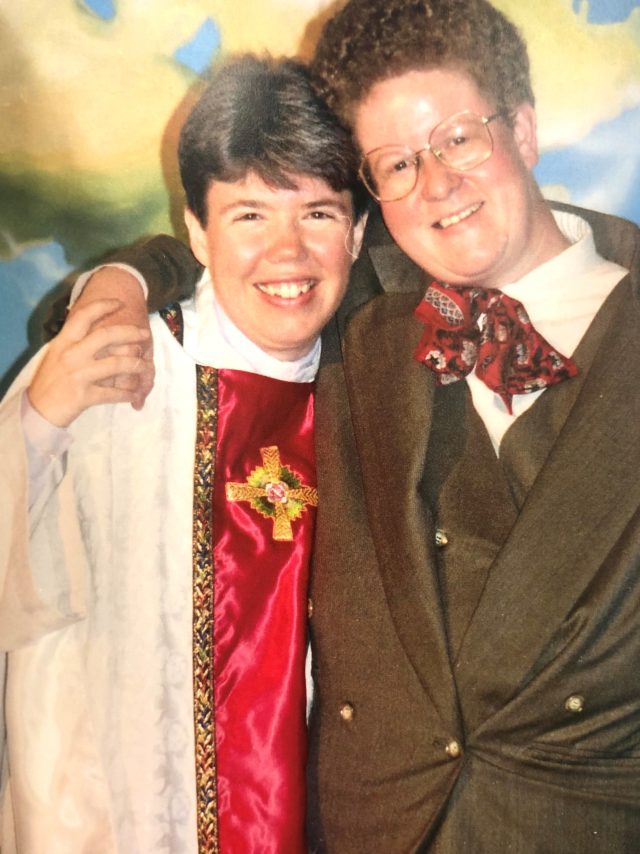 This post was written by IWA Student Specialist, Abbie Steuhm.

The LGBTQ+ community has grown in incredible size and visibility in the last decade. The legalization of same-sex marriage in the U.S. in 2015 was a colossal milestone for LGBTQ+ rights, and it has arguably helped in the normalization and acceptance of LGBTQ+ people nationwide. However, one may wonder about the lives of queer couples before this milestone. What did they do when they wanted to take their relationship to the next level? Did they just live together? Did they even believe in the concept of marriage? Kittredge Cherry and Audrey Lockwood’s forty-seven years together as a married lesbian couple helps answer these questions.

Reverend Kittredge “Kitt” Lynne Cherry and Audrey Ellen Lockwood were both born in 1957, with Cherry living in Iowa and Lockwood living in Wisconsin. The two graduated from the University of Iowa together in 1979 with Bachelor of Arts degrees. The couple then lived together in Japan, with Cherry on a studying-abroad scholarship and Lockwood beginning her career in business, before returning to the U.S. and settling in San Francisco, California. It was in San Francisco that Cherry and Lockwood became involved in the Metropolitan Community Church (MCC), one of the few Christian churches that welcomed the LGBTQ+ community. The two are now living together in Los Angeles, where Cherry continues her work on LGBTQ+ and spirituality via her blog Q Spirit.

It was in 1975 during their freshman year that Audrey Lockwood and Kittredge Cherry locked eyes with one another for the first time—and certainly not the last—while attending the University of Iowa. Lockwood reminisces on their meeting in her short article “My Summer of Love,” noting how her and Cherry “managed to get ourselves out of Burge Dorm and into the Stanley all girls’ dorm sophomore year, where we fell madly in love, as we watched beautiful sunsets from our room on the 10th floor overlooking the Iowa River.” 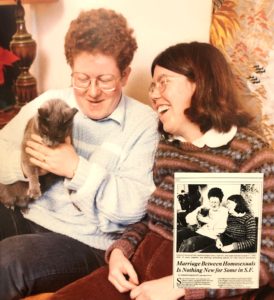 That love continued to flourish even as the couple traveled to Japan and then to Los Angeles, California, where Cherry was ordained as a minister for the MCC. Together, the couple advocated for LGBTQ+ rights, particularly LGBTQ+ rights within the Christian church. Cherry has written many books and articles about LGBTQ+ people’s spirituality and sexuality within the Christian church, from Hide and Speak: A Coming Out Guide (2006) to The Passion of Christ: A Gay Vision (2014). One of the earliest articles Cherry was involved in was the 1989 Los Angeles Times article, “Marriage Between Homosexuals is Nothing New for Some in S.F.,” where Cherry gives the proud statement that she still lives by to this day:

Same-sex marriage at this time was illegal, and most churches refused to even marry same-sex couples in spirit, but Cherry and Lockwood found a wonderfully willing ministry through the MCC. In 1987, Lockwood and Cherry were married, and they lived together happily as one of the few lesbian couples who were proudly “out” during the time. Despite not being legally married, Lockwood and Cherry nevertheless vowed their commitment to one another under their own beliefs and religion. They lived together for the next forty years until their marriage was legalized after the Obergefell vs. Hodges decision in 2015. They continue living happily ever after in Los Angeles to this very day.

It was no doubt a long road that Cherry and Lockwood traveled to get to where they are now along with the rest of the LGBTQ+ community. Cherry and Lockwood’s photobooks gives wonderful detail and insight into the history of the LGBTQ+ community, from every cat adopted and protest marched in the fight for same-sex marriage. Such a long, winding history, and yet Lockwood still remembers her time in the University of Iowa dorms. In the last lines of her article “My Summer of Love,” Lockwood says:

“To this day I can still see the view from 10th floor Stanley, as we listened to the Brandenburg concertos, Chopin nocturnes, and David Bowie singing ‘Oh You Pretty Things.’” 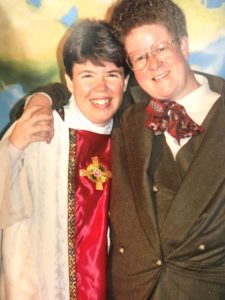