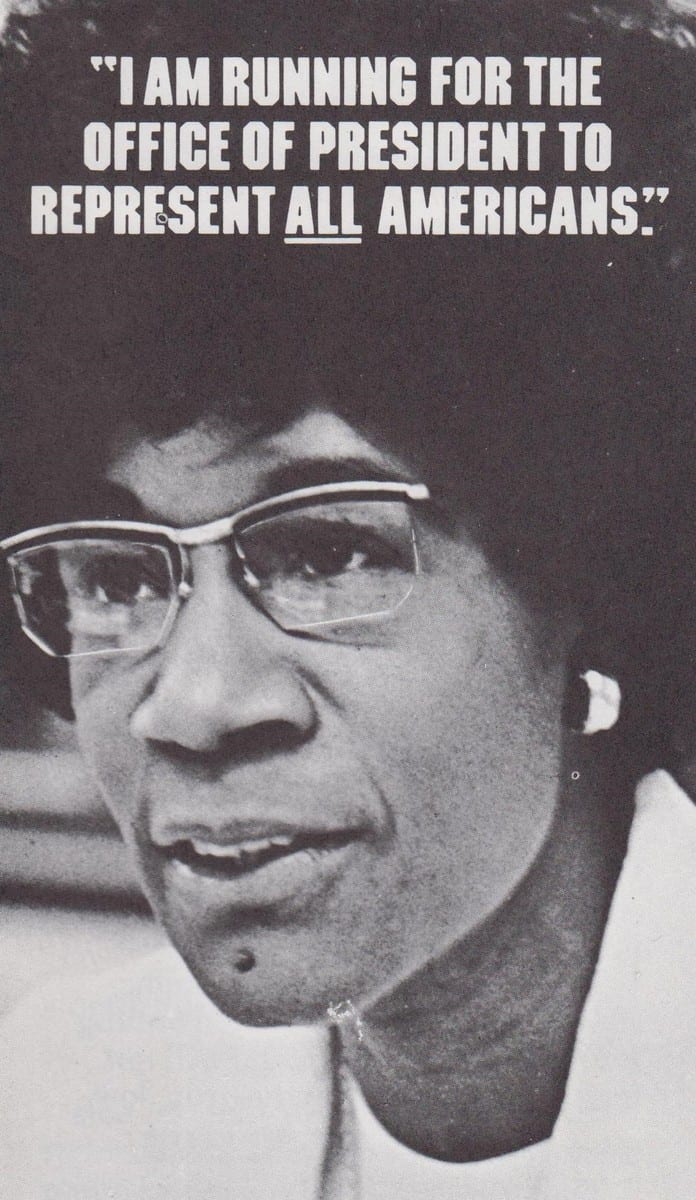 Sunday, November 30 is the 90th anniversary of the birth of Shirley Chisholm. The following blog post was written by Anna Bostwick Flaming. 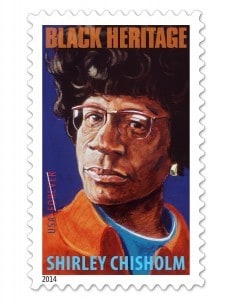 Shirley Chisholm, the “unbought and unbossed” African American congresswoman and 1972 Presidential candidate from the Bedford-Stuyvesant neighborhood of Brooklyn is the subject of a 2014 limited edition stamp.  Chisholm’s candidacy was remarkable not only because she presented Americans with the prospect of a Black woman in the Oval Office, but also because she promised to wrest electoral politics out of the hands of the rich and powerful. 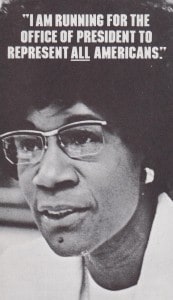 Shirley Chisholm viewed her campaign as an effort that would give voice to “all Americans.”  In particular, Chisholm opposed incumbent President Richard Nixon as the embodiment of a “minority government” only interested in “representing the wealthy and vested interest.”  The investigation of the Watergate scandal that began with the June 1972 break-in at the Democratic National Committee headquarters and the administration’s cover-up prompted congressional legislation intended to curb abuses in campaign finance.  These reforms were substantially dismantled recently when, in a 5-4 vote, the U.S. Supreme Court in McCutcheon struck down limits on the total sum that donors may contribute to candidates and parties.  Supreme Court Justice Stephen Breyer took the rare step of reading his dissent from the bench:  “Where money calls the tune,” he cautioned, “the voices of the people will not be heard.”  His turn of phrase suggests not just a warning about the future, but also an understanding of the past.  Just months before Watergate, Shirley Chisholm had used similar language to encourage small contributions to her 1972 Presidential campaign in donation envelopes promising to “give voice to that vast segment of the country that has never had national exposure before.” 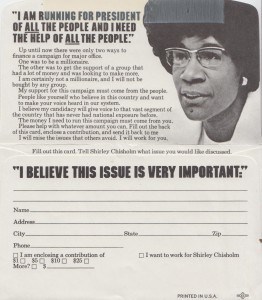 In 1968, Chisholm had become the first African American woman elected to Congress.  In Congress, as she had in the New York State Assembly, Chisholm concerned herself with the legal, educational, and employment concerns of women and minorities.  She was a founding member of both the Congressional Black Caucus and the National Women’s Political Caucus.  During her presidential campaign, Chisholm told Roxanne Conlin – a Democrat who would later run for Iowa governor in 1982 and for the U.S. Senate in 2010 – that 1972 must be the year that “women, blacks, brown, the young, the old, activists for social change, and just people who are tired of reading the election results before the votes are counted – are going to prove that our candidates and our policies and our government are not the exclusive preserve of the financial community, the political establishment and the opinion polls.”  Chisholm wanted to direct her energies on behalf of the concerns of the people.  She offered her outspoken advocacy on behalf of civil rights legislation, the Equal Rights Amendment, and a minimum family income; she opposed wiretapping, domestic spying, and the Vietnam War.

For many, Chisholm’s candidacy signaled a broader movement for change in America.  In 1972 New York Magazine columnist Richard Reeves warned, “It’s happening in Cedar Rapids, folks.”  Edna Griffin, who in the summer of 1948 had led a successful campaign to desegregate a Des Moines lunch counter (more than seven years before Rosa Parks refused to give up her seat on a bus in Montgomery, Alabama), was “quite surprised” by the support for Chisholm in Iowa.  Griffin, Roxanne Conlin, and Louise Rosenfield Noun, a prominent feminist and civil liberties activist and, later, a cofounder of the Iowa Women’s Archives, spearheaded efforts for Chisholm in Des Moines.  They established a state headquarters for Chisholm supporters in a private residence on Eleventh Street in order to reflect Chisholm’s preference for neighborhoods and community rather than “big business.  Noun later recalled that supporting Chisholm was one of the “most memorable” political adventures of her life.  In Iowa City, Chisholm supporters organized in the days leading up to the precinct caucuses.  They managed to join with the McGovern caucus to elect Sylvia T. Johnson, a Chicago native and part-time member of the Augustana College Psychology Department, as a Shirley Chisholm delegate. 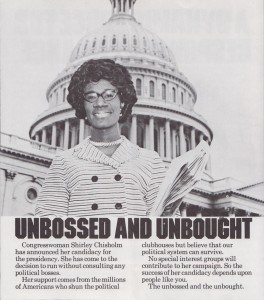 In campaign literature, Chisholm supporters proclaimed that the presidential candidate transcended categorization as “a woman, and a Black Woman at that;” rather, Shirley Chisholm was a beacon of “new hope for our system.”  Recent events remind us that we must still reckon with the work of the “unbought and unbossed” candidate.