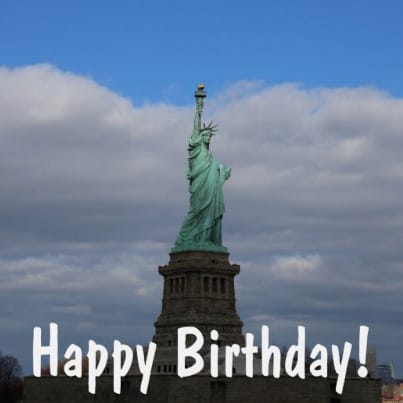 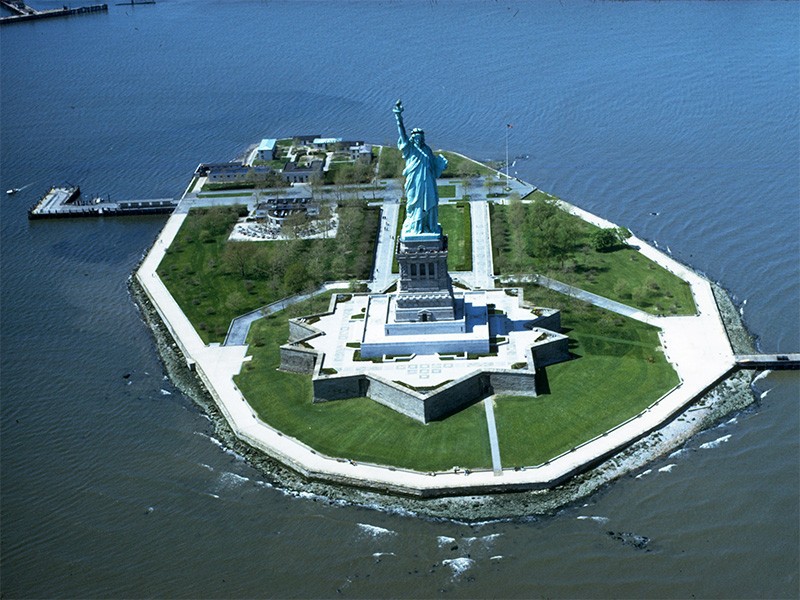 “Keep, ancient lands, your storied pomp!” cries she
With silent lips. “Give me your tired, your poor,
Your huddled masses yearning to breathe free,
The wretched refuse of your teeming shore.
Send these, the homeless, tempest-tossed to me,
I lift my lamp beside the golden door!

Those widely recognized words come from the sonnet New Colossus by Emma Lazarus. She wrote it for a fundraising auction raising money for the pedestal upon which the Statue of Liberty now sits. The sonnet is not, as many assume, on the tablet that is held in her hand. The tablet is inscribed with JULY IV MDCCLXXVI (July 4, 1776), which is the day the United States adopted the Declaration of Independence. A plaque with the entire New Colossus poem is inscribed and mounted inside the pedestal of the statue.

The Statue of Liberty stands on Liberty Island in Upper New York Bay and the entrance to New York. She has been welcoming visitors and immigrants to New York City since 1886! She was designed by Frédéric Auguste Bartholdi, a French sculptor, and built by Gustave Eiffel (yes, that Eiffel!), and dedicated on October 28, 1886. She was originally known as Liberty Enlightening the World.

It is said that the idea of the monument came about in an after-dinner conversation between Bartholdi and Edouard René de Laboulaye (an abolitionist and supporter of the Union during the Civil War). Others claim this is just legend, but legend or not, Laboulaye wanted to honor the Union victory and proposed a gift be built for the United States on the behalf of France. The Statue of Liberty represents the Roman goddess, Libertas. She holds a torch, a ‘tabula ansata’ (a tablet evoking the law), and a broken chain lies at her feet. The broken chain is said to be a symbol of the movement away from slavery.

The Statue of Liberty was the tallest metal statue in the world at that time. It was constructed of copper sheets and used Bartholdi’s 9-ft model. It was shipped – in 350 carefully marked pieces and packed in 214 crates – to New York City in 1885, reassembled, and dedicated in 1886. The Statue was reassembled on the pedestal in 4 months.

She originally served as a lighthouse, but in 1901 the operation was transferred from the United States Lighthouse Board to the War Department. The monument’s original boundaries were within Fort Wood, but were enlarged to encompass all of Bledsoe’s Island in 1937. In 1956 the name was changed to Liberty Island and in 1965 Ellis Island became part of the National Park Service (NPS). The base of the statue is an 11-pointed star, part of old Fort Wood and the 154-ft pedestal, built through American funding, is made of concrete faced with granite.

Renovation, which was completed in October 2012 (in time for 126th anniversary), added three new elevators and upgraded the stairs from the top of the pedestal to the crown and were among the $30 million “Life and Safety Upgrades.” Visitors in wheelchairs and other accessibility issues are now able to reach one of the observation decks at the top of the pedestal for the first time. A NPS official estimated that the renovations will allow 26,000 more people to visit the interior of the monument annually. In order to reach the crown from the top of the pedestal, visitors without accessibility issues must climb 393 steps.

Another renovation is a sophisticated rescue elevator which is used for emergency and maintenance activities and is the only elevator installed within the statue. It reaches from the pedestal to the crown and replaces an elevator that was over 30 years old. Public access to the balcony surrounding the torch has been closed since 1916 for safety reasons.

How Tall is the Statue of Liberty? Howtallisthestatueofliberty.org Date Accessed Oct. 26, 2016

Blakemore, Erin. Nov. 24, 2015. The Statue of Liberty Was Originally a Muslim Woman. Smithsonian.com