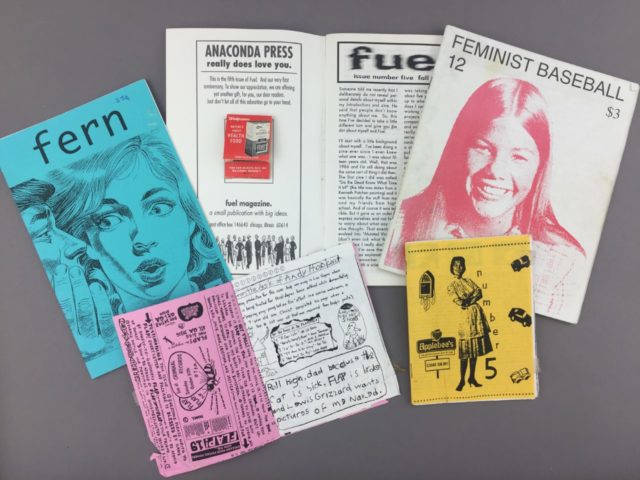 The following is written by Academic Outreach Coordinator Kathryn Reuter

In honor of Pride month, we are highlighting some queer zines in our collections.

A zine is a hand-made and self-published pamphlet that can contain writings, collages, comics, illustrations, and other artwork. Zines are made in a variety of styles and cover endless types of content; makers are motivated by the possibilities of self-expression and creativity in this medium. For a brief history of zines, and to find more zines in our collections you can refer to this resource from the University of Iowa Special Collections & Archives.

Because of their low production cost and the lack of oversight and censorship in making a zine, zines can be especially appealing to members of marginalized communities or counter-culture movements. An early subculture that embraced zines was the Science Fiction Fan community; fans would produce zines with newsletters, fan art, and fan fiction to share with others in the fandom.

In self-publishing their own work, people who are intentionally excluded from traditional media and who have barriers to accessing the institutions of publishing and academia can “take the mic” and make a zine on any topic they are passionate about. Other subcultures that adopted the counterculture self-expression of zines include the punk music movement and the riot grrrl movement. Alongside these movements, queer folks have been making and reading zines for decades.

Some of the queer zines in our collections have an informative bent to them, such as Asexual, Bisexual, Cissexual: A Sexual Identity Glossary and Dykes and Fags Want to Know, which features interviews with lesbian political prisoners. Here we can see an example of how queer zine culture frequently blends with other movements for social/ political justice, including the Prisoners’ Rights Movement and the movement for Prison Abolition.

In the same collection – ZINES AND FANZINES (MsC0331) – we came across the zine series The Life and Times of Butch Dykes which features wonderfully illustrated brief biographies of lesbians you probably did not learn about in history class.

Queer history is a subject that mainstream society for years has intentionally overlooked. By producing and spreading zines that share queer histories, zine makers are emphatically stating: we are here, we have always been here, and we belong here.

Even with the positive and inclusive messages in queer zines, their makers acknowledged that the content of their creations would not be accepted by all. In the front matter of the zine Homocore, the editors explain how to subscribe to the zine and reassure readers that issues are “mailed in a plain envelope to accommodate your oppressive environment.” Queer people were at risk of being discriminated against by landlords, neighbors, roommates, or even family members who may have seen their mail.

Despite this risk, queer zine makers and readers were leveraging the postal system as a tool for community building. Zines like Holy Titclamps and Homocore featured sections for printing letters from folks seeking pen pals, people who were interested in zine swaps and subscriptions, and even people looking to swap records and share music.

In addition to building personal relationships, zines offered the opportunity to organize readers in social justice efforts. For example, Issue 7 of Homocore includes a full page outlining the Marlboro/ Miller Boycott of 1990-1991. The boycott, organized by ACT-UP/San Francisco and ACT-UP/Washington DC, aimed to unseat conservative Senator Jesse Helms (who was a vocal opponent of gay rights and feminism). Helms received hefty political donations from Phillip Morris, makers of Marlboro cigarettes and then-parent company of Miller Brewing. Homocore writes, “Helms lives in the tobacco industry’s back yard; he supports them with legislation, they support him with money” and outlines reasons to participate in the boycott. For decades, zine editors have used their zines as a political tool to amplify the efforts of queer organizers and queer rights campaigns.

If you can’t stop by Special Collections & Archives to read zines this summer, we highly recommend the Queer Zine Archive Project – an online archive “to preserve queer zines and make them available to other queers, researchers, historians, punks, and anyone else who has an interest in DIY publishing and underground queer communities.”

For those local, the LGBTQ Iowa Archives and Library is a wonderful resource for more queer history in the Midwest.