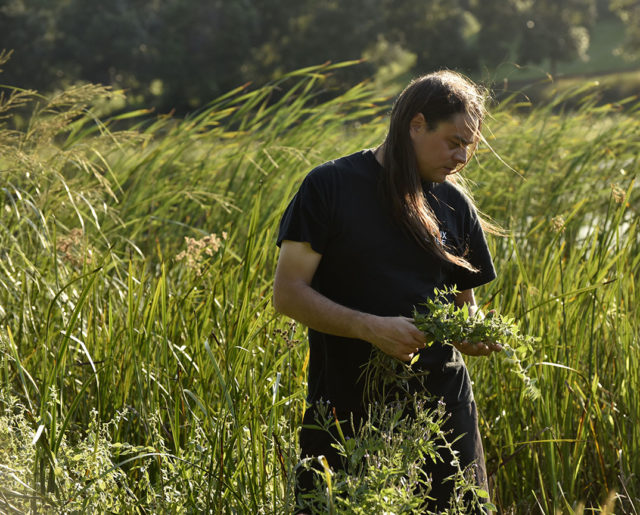 Sean Sherman, a member of the Oglala Lakota tribe, was born in 1974 and spent the early days of his childhood on the Pine Ridge Reservation in South Dakota. Much of his childhood was spent on his family’s ranch, playing out on the edge of the Badlands. Coyotes, rattlesnakes, jackrabbits, mallards, sandhill cranes, prairie dogs and more were a common populace of the area. At seven, Sherman was hunting animals like grouse and pronghorn antelope, while also helping gather chokeberries, and dug up wild turnips and timpsula.  Along with his cousins he pitched in to help around the family farm, moving cattle, tracking horses, and mending fences.

However, his childhood wasn’t all work. Much of it was spent immersed in his culture: attending powwows, Sun Dances, holiday parades, and family gatherings. Even in school, the Lakota-language class they had was just as important as their English, math, and social studies classes. While he was close to his culture, Sherman remarks that the land around them wasn’t the best “growing area,” supporting mostly cactus and desert plants.

In an interview with American food journalist Francis Lam, Sherman states that “We didn’t have a lot of the traditional foods growing up; we definitely had a lot of commodity foods. … But looking backwards as a chef much later in life, I realized there should’ve been a lot more knowledge of the traditional foods of the Lakota. That’s what set me off on the path; I was trying to figure out the food of my own heritage.”

After his parents separated, Sherman, his sister, and his mother moved to Spearfish, South Dakota so his mother could pursue her college degree. He and his sister put food on the table for the family as their mother was now a single parent working two jobs and busy with school. During this time of his life, chef-hood crept closer into his life, into his future.

At 13, he bussed tables and prepped food at Sluice, a restaurant nearby. The next summer he worked at the Sylvan Lake resort as the youngest on staff, working on the grill, where the college-age kids experimented with meats, switching from steaks to rattlesnake and beaver. Sherman remarks “I knew then that I loved this work.”

Sherman’s culture has always been a large part of his life, and as such, so has Indigenous food. When Sherman’s grandfather was a child, he was one of the first Native American children to attend a mission school on their reservation. The forced assimilation that started during the 19th century eliminated a lot of Native American food culture across the country, and that was no exception for Sherman’s family. Despite this experience, Sherman’s grandfather still maintained parts of his tribe’s food culture, becoming one Sherman’s first teacher. He passed when Sherman was 18, leaving the budding chef with a plethora of unanswered questions, both in general and about the culture of their food.

After spending his early 20s in Minneapolis as a sous chef and becoming an executive chef at La Bodega in 2000, Sherman decided he wanted to create a Lakota cookbook. Finding the research on plants and game native to the Great Plains severely lacking, Sherman devised his own research plan to study ethnobotany. He spent time talking to elders and looking at how Native Americans in other parts of the country had their own food systems and pieced together what commonality they shared.

At 29 he moved to San Francisco, Nayarit in Mexico. This region was colonized by Europeans later than other areas, leaving much of the native plants and foods intact. He found the culture there very similar to his own back home in the Midwest.

Sherman states in his introduction to his book  The Sioux Chef’s Indigenous Kitchen, “In an Epiphany, I tasted how food weaves people together, connects families through generations, is a life force of identity and social structure. After seeing how the Huicholes [the native individuals in the area] held on to so much of their pre-European culture through artwork and food, I recognized that I wanted to know my own food heritage. What did my ancestors eat before the Europeans arrived on our lands?”

Sherman spent a lot of time reading cookbooks, magazines, research publications, along with traveling across the US to visit other Indigenous Americans to learn more about their food cultures. He states that one of the biggest parts of Native American cuisine was the method of preserving their food, as during the summer they were preparing for the next winter. He relied on a food dehydrator and experimented with drying by wood fires or using the sun. His research is continuous, but in 2014 he was able to  put his work into fruition by creating the organization The Sioux Chef. He describes The Sioux Chef as “a mission-driven enterprise of Indigenous team members.” It includes the Tatanka Food Truck which is a full-service catering company, Indigenous Food Labs, an Indigenous kitchen and training center, and Sherman’s restaurant: Owamni.

Owamni was named after a map of the Eastern Sioux that Thompson’s grandfather and his best friend made.  Without this map, many of the original names of the natural landmarks before colonization would’ve been lost. Owamni sits on an area which used to be full of waterfalls with sacred islands to the Dakota and Anishinaabe people.

Owamni, like the organization The Sioux Chef, is dedicated to de-colonizing food. Thompson, who is of Dakota ancestry has stated that “These foods were systematically removed by forced assimilation and genocide and the culture was almost erased. The fact that we have these foods here is an act of resistance itself.”

The name origin of Owamni, the food that they serve, and The Sioux Chef entirely are part of Sherman’s mission to engage the community in conversations about race, equity, sustainability, and the history of Indigenous Americans. To teach a history that has often been left out and erased.

Sherman states “I’ll never learn everything about Indigenous foods, but we’re setting up structures and systems to be able to preserve it and maintain it for the following generations … We envision eventually being able to drive across the U.S. or anywhere in North America and having the option of Indigenous food businesses: to be able to stop there and to experience the immense diversity and culture and language and stories and food.”

In our library here at University of Iowa, we have Sean Sherman’s book, The Sioux Chef’s Indigenous Kitchen, so, if you’d like to learn more about Sherman, his journey, different Indigenous foods and their importance, and want to learn to cook some of his recipes yourself, this book is worth a read!

One of Minneapolis’ Newest, Hottest Restaurants Is Also One of the Country’s Most Important

‘Our whole mission is Indigenous education and Indigenous food access’: A Q&A with owners of Owamni by The Sioux Chef

Sean Sherman: What Can We Learn From Indigenous Culinary Traditions?