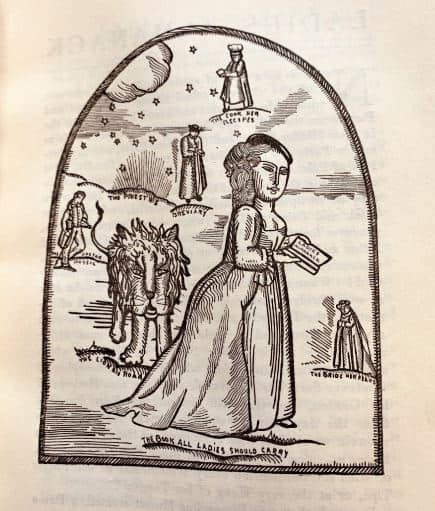 March is women’s history month, and it feels appropriate to turn towards the work of a great writer from the early twentieth century, Djuna Barnes.

Barnes is well known to students of gender and sexuality, particularly for her literary work that broached the topic of homosexuality in ways that ran afoul of censorship laws in the United States in the early half of the 20th century. Born in New York in 1892, she spent most of the 1920s in Paris, where she befriended author James Joyce and enjoyed some success as an author herself, though her now-celebrated novel Nightwood did poorly at the time.

UI Libraries Special Collections & Archives has recently acquired a first edition copy of Barnes 1928 roman à clef, Ladies Almanack. The first edition had a run of 1,050 copies, which it appears the author and her friends handed out on the streets of Paris. They even smuggled it into the United States, where the book’s overt description of lesbian relationships defied decency laws. Even the book’s printer, Edward Titus, blocked out his name on the novel’s title page, either to protect himself from the possibility of legal reprisal for the previous reason, or in fear of legal reprisal by members of the elite lesbian circle surrounding Natalie Clifford Barney that the book obliquely describes.

The novel is told through the genre of an almanac, with careful attention to time and seasons and their relationship to the female body. The illustrations, all created by Barnes herself, are meant to resemble the woodblock prints of early almanacs. Likewise, the illustrations often depict the labors of the month, tying them to a long tradition of guidance books showing the appropriate actions at a given moment—such a use of illustrations goes back to books of hours and their miniatures of the labors of the month.  Author Lindsay Starck, in the summer 2019 issue of Modern Fiction Studies, argued that this attention to the rhythms of the year serves to highlight early twentieth-century sexologists arguing that homosexuals were out of step with the appropriate rhythms of nature.

Barnes and her work did not enjoy widespread success during her lifetime or enter the mainstream of literary conversation —this is in large part due to the repression of her work and bigotry against her due to her homosexuality. The first edition of Ladies Almanack has an important story to tell in its reminding us that book history often takes center stage in the history of censorship and repression. I hope as you look at this book you’ll imagine Barnes surreptitiously and illegally carrying this little volume with its covered printing statement, full of “dangerous” ideas, across the border into the United States.