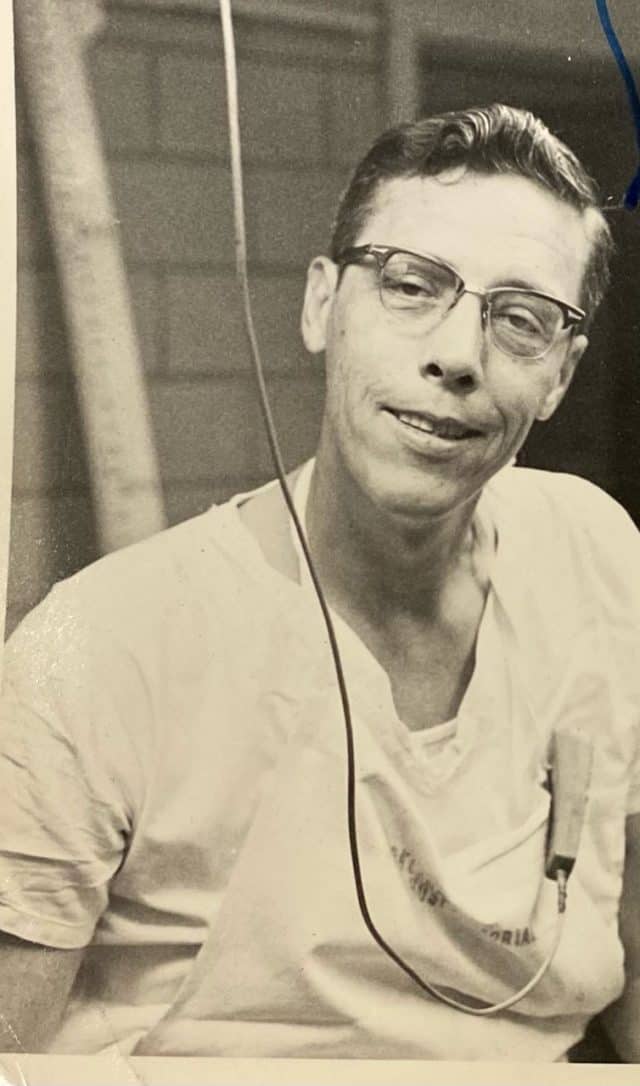 The following is written by graduate student worker Bailey Adolph.

A collection that is currently being reprocessed in Special Collections & Archives is the Earl F. Rose Papers, which gives a unique perspective of the John F. Kennedy Assassination and the events that followed. Earl F. Rose was the medical examiner who performed the autopsies of Lee Harvey Oswald, Officer J.D. Tippit, and Jack Ruby. One of the greatest resources in the collection is Rose’s memoir that gives insight into the assassination, the autopsies, the subsequent investigations into the murders, and the resulting conspiracy theories. The following is a brief synopsis of the memoir to give a taste of what it is like to peruse this collection.

On November 22, 1963 in Dallas, Texas, Lee Harvey Oswald assassinated President John F. Kennedy. During this time, Earl F. Rose was the medical examiner for Dallas County and he was in his office when Kennedy was brought into the Parkland Memorial Hospital Emergency Room. Rose immediately went to the ER because this death was a homicide, and medicolegal considerations took priority for the future trial. At this time, the federal government had no criminal jurisdiction over murder, even the murder of the president, so this was a matter of the state, meaning the courts of Texas had exclusive jurisdiction over this matter. It also made the most sense for the autopsy to be done in Dallas as the Texas courts would be handling the trial for this crime and therefore an autopsy done in Texas would be more credible. However, the Justice of the Peace had to authorize the autopsy otherwise the control would pass over to the next of kin, Jackie Kennedy. According to Rose’s memoir, he repeatedly told the Justice of the Peace to authorize an autopsy but he shrank away from responsibility. Ultimately, they removed the body and Mrs. Kennedy authorized a partial autopsy to be done at the hospital of her choice, Bethesda Naval Hospital in Washington D.C. There were several issues with the incomplete autopsy as it was fraught with errors due to a lack of experience of those performing the autopsy and their inability to properly evaluate the death and gunshot wounds. The autopsy did not ultimately matter for a trial of Lee Harvey Oswald, who was murdered before one could take place. It did, however, contribute to conspiracy theories in the following years.

A character in this story that is largely unknown is Dallas Officer J.D. Tippit. After Lee Harvey Oswald assassinated the President, he was on the run.  Officer Tippit happened to cross his path while he was on patrol, and stopped the pedestrian Oswald to have a chat. Oswald pulled a gun on him and shot him four times before leaving the scene and running to a theater where he was later apprehended. Officer Tippit was dead upon arrival at Parkland Memorial Hospital and Earl F. Rose performed the autopsy. In his memoir, Rose states that “It was imperative that the investigation into the death of Officer Tippit be thorough and complete for the prosecution of Lee Harvey Oswald, the putative defendant, might hinge on this autopsy information in the event that it was not possible to prosecute Oswald for the assassination of the president,” (Dallas: My View of History, 1963-1968, p. 76). Following his apprehension, Oswald was held in the Dallas City Police Department and was to be transferred to the Dallas County Jail the morning of November 24, 1963.

That morning, Jack Ruby shot Oswald in the basement of the Dallas Police Headquarters while handcuffed between two Dallas detectives. Rose went to his office in Parkland Memorial Hospital while Oswald was rushed there for emergency surgery, which was unsuccessful and he died there. Rose then performed a medicolegal forensic autopsy in order to maximize the amount of information to be used during the trial of Jack Ruby. He subsequently used the document to testify at the trial in 1964. Jack Ruby, Oswald’s murderer, was charged and convicted for first degree murder in March 1964. However, the conviction was later reversed and delayed for a new trial by the Texas Court of Criminal Appeals. He died on January 3, 1967 from primary bronchial cancer of the lung before a retrial could be held. Rose was brought in to perform this autopsy as well.

Meanwhile, President Lyndon B. Johnson appointed the Warren Commission in January 1964 in order to investigate the assassination of President Kennedy. Those involved concluded in a report released on September 7, 1964 that Lee Harvey Oswald acted alone, without any conspiracy, foreign or domestic, (Rose, p. 155). However, there were many discrepancies and unanswered questions in the Report of the Warren Commission and this fueled conspiracy theories. Therefore, the House Select Committee on the Assassination of John F. Kennedy and Martin Luther King, Jr. was at work from 1977 to 1978. Rose was a member of the panel of forensic pathologists appointed as consultants for this committee. He traveled to Washington D.C. to review the forensic material and to give his testimony regarding what he observed. After all information was gathered, the hearings were held and they came to the conclusion that Lee Harvey Oswald committed the crime and that while the committee believes that there were two gunmen, scientific evidence does not support that.

So, how did this collection end up at Iowa? Earl F. Rose began teaching pathology at the University of Iowa in 1968, retiring in 1992. While he was working for the University of Iowa, Rose autopsied Roy J. Carver, a benefactor of the University of Iowa Hospitals and Clinics, when he died in 1981. This experience is described in another of Rose’s personal writings, My Ana. He and his wife Marilyn were quite active in the Iowa City community later in life as well, which included donating his materials to the University of Iowa Special Collections & Archives. In this collection, there are actual pieces to the story that was just told. Newspapers, slides and reports from Lee Harvey Oswald’s and Jack Ruby’s autopsies, the test bullet shot out of the gun used to kill Lee Harvey Oswald, personal writings describing the monumental period of history that he lived through and played a role in. The items work alongside Rose’s personal writings and actual legal documentation to give the researcher a unique perspective into a highly publicized event in American history. It is arranged in a way that allows the researcher to learn about the event through Rose’s words and then to view supplemental materials that strengthen the narrative. Finally, the collection concludes with correspondence between Rose and conspiracy theorists that leave the researcher either considering other outcomes or amused by the ideas that others had when conducting their own research. The Earl F. Rose Papers is a collection with exceptional depth and we welcome researchers to come discover more about the John F. Kennedy Assassination as well as the unknown key player Earl F. Rose.