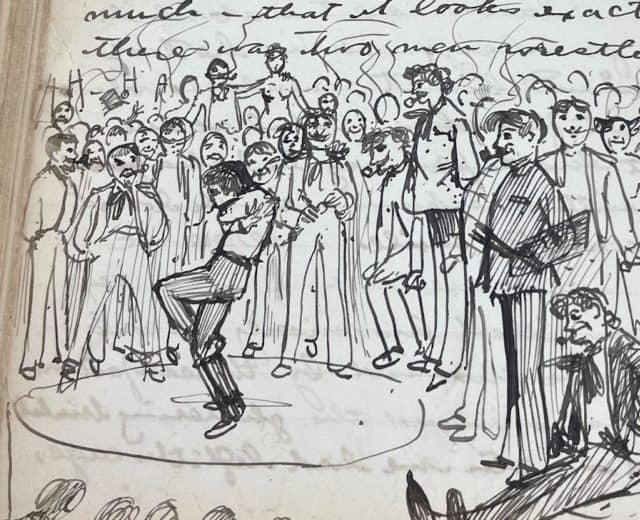 Stuart Travis (1868-1942) was an American artist who was accepted into art school in France during the latter half of the 19th century. He was just nineteen years old when he made the journey alone from New York to Europe. In his travel diary, housed in Special Collections & Archives, he tells the story of his travels to France, and all of the things he saw and thought while he was there, or at least the things that he remembered to write down.

He starts the diary during his voyage to London, England, aboard the USS Italy. Confined to the ship, he gives hour by hour updates as to what is happening aboard the ship and what the weather is like outside. He complains of the smell in the smoking room at night and counts down the hours until he falls seasick. He also illustrates many of his experiences. A personal favorite is the image he drew of himself standing near the door of the smoking room. The image captures the dimly lit cabin, and the way that his coat is blowing in the wind gives it a sort of eerie feeling.

Once he arrives in what he refers to as ‘Queens’-land, alternatively known as London, he continues to tell the stories of what is happening around him. According to Travis, he knew the ship had reached London because those above deck had begun to ring the bells. No longer confined to the ship, the frequency of his stories begin to decrease to only one entry a day. While he was in London he stayed with an old woman, someone he states as being a comfort to him, and he writes long entries about what he sees on the street and what his room is like in London.

Once he moves on to France, his entries become even shorter and further in between, but the stories become more interesting. His excitement about attending the academy is very apparent throughout his early entries in France. He loves the art he is doing, although he does often tell about his frustrations he has with each of his creations. He also despises drawing his own portrait. More specifically, he hates having to use a looking glass because it is, “impossible to paint through a looking glass,” and he puts off his portrait for other work.

Between his art-related complaints, he describes what a typical day would look like for a young man and his friends, in and out of school. He tells how they critique each other’s art before class starts, and their professors listen in to see what they are thinking. They each had a favorite figure model, male or female, and were always excited when they got to work with them. He is surrounded by many personalities and talks openly of all of them. He observes that some of the models are very aloof and the professors are very snarky, that he hates tourists, and he loves mimes. One of the mimes, a classmate of his, is able to wrestle himself, performing while others gather around him and watch. Travis was so impressed that he illustrated the experience.

Despite the excitement of his travels, Travis’s entries reveal some hints of homesickness. Many of the entries, especially those in the beginning and end, mention the number of letters he has written home. He says he has written dozens of letters to those back in America, but has yet to have one be returned. He hopes that if he continues to write to his family, one day one of the letters will be answered, but he never mentions whether or not anyone wrote back to him. The longer he stays in Europe, the less he writes in his diary as well. There are many empty sections of the journal, some that are dated, and some that are not. He also leaves room in some entries for an illustration of the day, but never gets around to filling them in. There are also days that he has written in the middle of the page, leaving room for the days before and after that he never got around to completing. These are actions maybe all of us have been guilty of in our own journaling.

The end of his diary leaves many questions as to what happened next in his life, even the end of the trip is not included. The very last entry is just a pencil drawing of a bird in a cage, hanging in his suite on the voyage home. This drawing feels as unfinished as Travis’ diary, as the majority of the images he included before it are in ink. This leaves one to wonder what could have happened to Travis after this diary project was abandoned.

Fear not, some online searching reveals that Travis lived a long and successful life after this diary. He lived to be 74 years old, illustrated magazine covers for Vogue, and was a partner at a few museums. If you wish to walk in the shoes of a young artist in the last half of the 19th century, Stuart Travis’s diary is a compelling place to start.