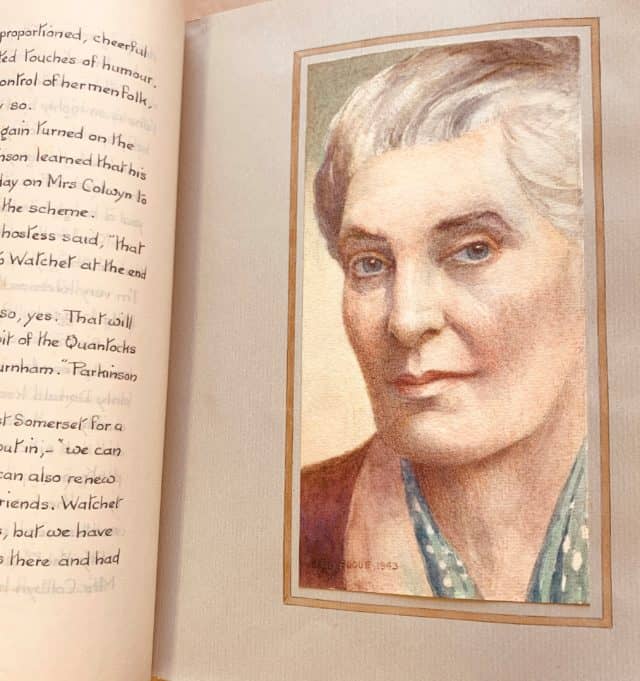 As the snow begins to melt away in Iowa City, happily we begin to think of nature and adventures along the hills and riverbanks of the countryside. This desire for spring is felt all the more as we live through times of loss and global catastrophe. I suggest that it is this same yearning for bucolic settings that drove English author and artist Ida Bogue to make our newest edition to the collection, The Loiterers, at the height of World War II.

I should first say that no words I can write can quite do this manuscript justice—it is a stunning work of art, from its over 800 handwritten pages, 30 handmade watercolors, and the decorative binding made by Bogue herself. The book tells the story of two young boys who go on adventures through the English countryside and meet a cast of characters, many of whom are illustrated in the watercolors. Also included are a number of objects pertinent to the story tucked into the binding, including a leaf and several nineteenth-century washing service cards from Hong Kong and Shanghai.

Bogue may have intended the book as a gift for her young nephews, no doubt suffering through the war. It’s difficult to say, however, as Bogue was a reclusive figure, having never reached authorial fame, having no children of her own, or any sustained relationships as far as can be see. In her lifetime she apparently wrote six different manuscripts stories like this. One, a fairy story called Child-Hazel, is still owned by the family and appeared on an episode of Antiques Roadshow in the early 2000s. It is likely that Bogue’s family also has another one of these manuscripts stories as well. A third story was sent by Bogue as a gift for the young princesses Margaret and Elizabeth at Buckingham Palace. The other three were assumed lost—though our manuscript is believed to be one of these three.

Bogue’s life is difficult to research, and she no doubt did not achieve the acclaim she deserved in her lifetime. One of the pages of her book is inscribed with a haunting command: “Remember Me.”

Though it comes too late, we invite you to witness Bogue’s masterful art and remember her among the numerous women whose art has gone unwitnessed and undiscussed.

We hope to have this work digitized so that all may enjoy Bogue’s craft and will notify our readers when we do. If you have any information that might aid in reaching the family of Ida Bogue, please contact the curator of rare books, Eric Ensley: eric-ensley@uiowa.edu