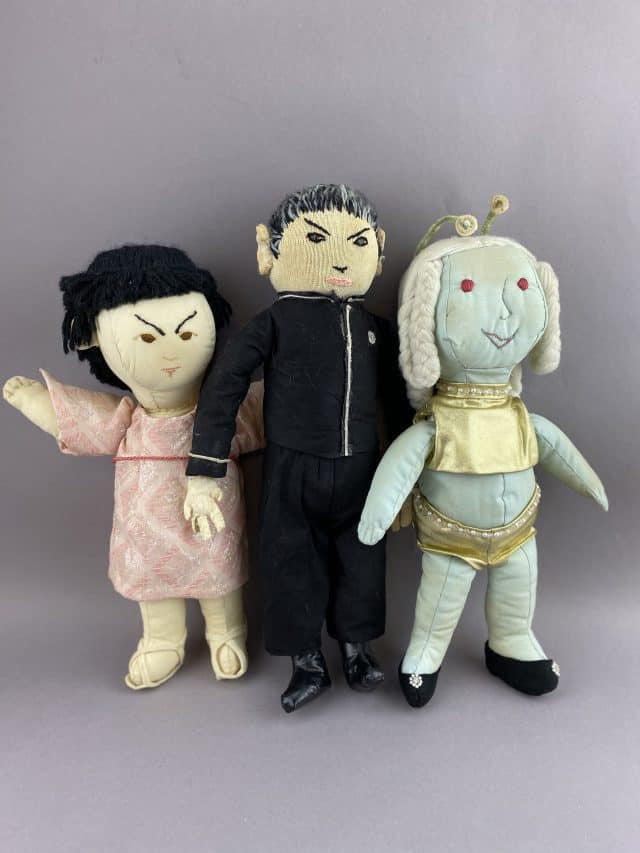 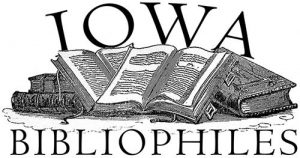 Today is April 8th, 2020, the day we were supposed to gather for the last Iowa Bibliophiles of the academic year. The plan: come together, eat some tasty snacks, and explore some of the highlights from our collection with the help of our wonderful student workers. Our students had selected manuscripts, books, and more, researched them, and planned to present the information at their own “viewing station” for anyone interested.

That’s how it was supposed to go. However, as all of us have experienced in the last few weeks, plans had to change. The world threw us an unexpected twist, and to protect our family, friends, and community, we cancelled this event.

Yet, the students had picked some interesting collection material, and it would be a shame not to find a way to share them with you. While we cannot meet in person, perhaps this blog can provide some of the entertainment and education we are seeking at this time. Below are a few items described by our hardworking students, a virtual Iowa Bibliophiles if you will. We hope you enjoy.

The Mary Jennara Wenk Star Trek Collection (MsC1031) was originally acquired in 2015 as part of the continuing efforts to collect and preserve pop culture and fandom material. Because we have many new collections, the donor of the L. Falcon Media Fandom Collection gave the library a very generous gift to allow a student (it’s me, Zoë Webb) more time to focus on processing a number of newly acquired fandom collections, including the Wenk Collection.

Mary Jennara Wenk was an active member of the Star Trek and Star Wars fan communities of the 1970s and 1980s, attending conventions, collecting fan art, and engaging in lively correspondence with other fans, as well as creating award-winning content for fanzines. This collection reflects her active lifestyle, containing a number of Star Trek zines, a sizable stack of fan art (including a painting done by author Hal Clement), correspondence, convention material, and an impressive collection of 3D objects—notably including some ears worn by Leonard Nimoy on the set of Star Trek. There are many quality items in this collection, but my personal favorites are the handmade dolls, the Starfleet Academy Class Rings, and, of course, Spock’s ears.

Both the Andorian girl (right) and the Vulcan child (left) were made by Devra Langsam, co-editor of Spockanalia, the very first all-Star Trek zine ever published, and apparently an excellent crafter. The doll version of Spock’s Vulcan father, Sarek (center), was made by a mystery artist in the 1970s. The Andorian girl is perhaps my favorite of the three, with her little pipe cleaner antennae, the pearl-decked gold bikini, and her adorable yarn braids.

The Starfleet Academy Class Rings (Class of ’66 and ’67) were commissioned by an unknown genius of a fan, and was legitimately made by Jostens, the company that still has a monopoly on class rings. The 14k rings depict the Starfleet Command insignia on top, the Academy’s official emblem with the Golden Gate Bridge, and the flag of the United Federation of Planets. I never bought a class ring in high school because they were absurdly expensive, but would I have bought this and worn it in public on a normal day? Yes.

Of course, we can’t talk about this collection without mentioning Spock’s ears. Leonard Nimoy went through dozens of these flimsy foam ears, held on by glue and coated in makeup, melting under the hot lights of the set. Everyone was terribly excited to see them, but during the initial unboxing of the collection, to everyone’s horror, the ears were nowhere to be found. They re-boxed and re-un-boxed the collection several times before someone thought to look in the plastic Barbie purse which, in hindsight, did seem like a very incongruous part of the collection. Now the ears are housed in a sky blue bespoke box with a secret drawer underneath for their original home, the Barbie purse.

The Beauty of Handwritten Cookbooks with Diane Ray

I really admire everyday items that are well made and functional, but also beautiful in a way that enhances use without interfering with functionality. Well-crafted wood furniture comes to mind, or mosaic floors. After looking for items to highlight for Bibliophiles, I have a new item to add to that list—cookbook manuscripts!

This 1818 cookbook from East Hartford shows that the writer was intentionally enhancing the titles, as many of them are unfinished. A few show the writers intent, with flourishing capitals and dark, filled in

letters. However most simply start with the second letter, lightly sketched, as though the author never got around to finishing. I think that’s something most of us can relate to.

The book is only 6 1/4 x 4 inches, bound in marbled paper-covered boards. There is not a lot of information given about the author of this cookbook, and the recipes are in a few different hands, suggesting multiple contributors, maybe from the same family. The last person to write in it gives us a clue of origin, as they write after their last entry “East Hartford, July 29, 1818.”

This is an American cookbook from 1759, written in a style of handwriting that calls to mind cobbled streets, buckle shoes and pewter shops. Similar to the other recipe books from this era in our collection, rather than listing ingredients with detailed instructions as one expects today, the writer assumes a certain level of base knowledge of cooking in a colonial kitchen. Details for preparation are given in a rather conversational tone, as if they were in your kitchen talking you through it.

We presume it is American because at one point it mentions the purchase of “Indian meal and corn”. There are clues to ownership with inscriptions in the beginning and end of the book “M. Ragen” & “From M. Regan to Hannah Wade.”, respectively. Other recipes include: To preserrve Quinces white; To make Marmalad of Orenges; To make Raspberry Cakes, To make Marmalad of Abricots; the best kind of perfuming Cakes to Burne; The Ordinary Sort of perfuming Cakes; and To make Puff & Past, very double & good”

Emma Cornelius Ricketson’s cookbook has the nicest cover of the three cookbook manuscripts mentioned, with the presumed writer’s name “Emma C. Ricketson’’ embossed in gold on the cover. Said author also took the most care to insure proper inheritance, which is spelled on the first page: “Published by Wm. K. Tallman to whom it is willed in case he outlives the above Emma Cornelia. But in case the said Emma Cornela outlives the Publisher then it is to pass over to Abby Y. Gherman provided however she outlives the 2 aforementioned.” Special Collections, while not listed, is proud to take their place in what was surely a distinguished line of previous owners.

Similar to the previous cookbooks, these recipes do not offer extensive instruction. In fact, it often simply lists the ingredients and trusts the reader knows how to do the rest.

Dated 1862 and labeled as being from New Bedford, the recipes are broken into categories such as “Meats,” “Breakfast and Tea,” “Sauces,” “Puddings,” “Pies, Desserts, Jellies, Gingerbread Cookes, Etc.,” “Cake,” “Wines,” and “Miscellaneous,” which includes recipes for such things as cologne, pomade, hair tonic, and to perfume sick rooms (A few drops of oil of sandalwood dropped onto a hot shovel in case you were interested)

I feel delighted to introduce the rare Chinese-language collection, Manuscripts of Chinese Writers held in Special Collections & University Archives. Growing up in a family with the tradition of bookworms, I have been passionate about reading literary works since my childhood. Chinese writer Wang Meng’s novels, journalist Xu Chi‘s non-fiction books, and poet Can Xue’s poems were my “pillow books” (Zhen Bian Du Wu). This Chinese phrase refers to the books placed under someone’s pillow, which enables them to read those books for convenience before falling asleep. So, when I found the rare Chinese-language collection containing those writers’ manuscripts, I felt excited to introduce them to my American friends and patrons. As a graduate student working in Special Collections & University Archives, I was given the opportunity to touch those manuscripts in the Chinese Writers’ Collection.

The history of this rare Chinese-language collection can be traced back to the early 1990s. The first Chinese reference librarian in the UI Libraries, Dr. Peter Xinping Zhou, was engaged in the creation of this collection. According to his memoir, “in October 1991, the University of Iowa Libraries authorized the creation of a Chinese writers’ special collection consisting of the complete works and selected manuscripts authored by Chinese writers who have participated in the International Writing Program or the Iowa Writers’ Workshops.” (Peter X. Zhou, “Chinese Writers in Iowa.” Books at Iowa, no.58, 1993, p. 6. https://doi.org/10.17077/0006-7474.1229) Thanks to Dr. Zhou’s efforts in contacting those Chinese writers and seeking the donation of their manuscripts, we can now read them in the reading room of the UI Special Collections.

The most interesting discovery, which I took when processing the manuscripts in the collection, is the new lens to look at the Chinese feminist writer Ting Ling. Different from the impression I took from reading her books, I found a very “personal” face of Ting Ling. As seen in the following photocopy of Ting Ling’s letter to Hualing Nieh Engle in 1980, in its end, she wrote, “let me shake your hand closely again. ” She is so passionate and emotional!

Although the lack of knowledge in the Chinese language may hinder local readers’ exploration of this collection, they may take opportunities to read and grasp those manuscripts very soon. The librarians, archivists, and student workers in the library are working on selectively translating these literary works. For example, I am engaged in establishing a bilingual linked-data database. The initial outcome of this project will be presented in the 2020 LD4 Conference on Linked Data in Libraries in Dallas this summer. Moreover, another in-progress project of an annotated bibliography of those literary works in the collection will be posted online late this summer.