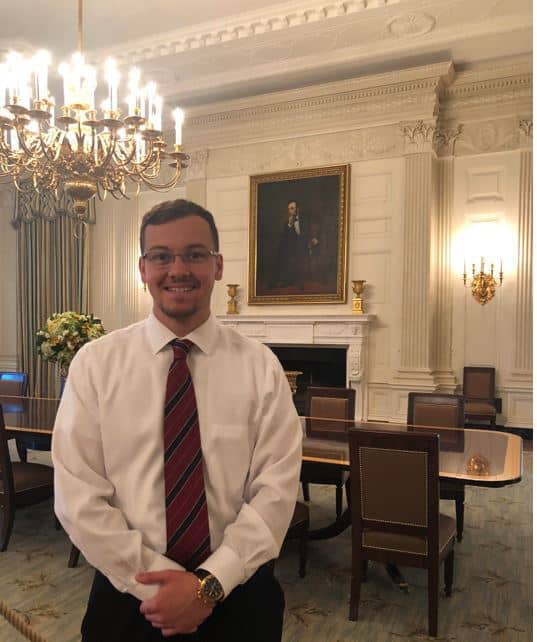 Special Collections student worker Seth Torchia spent a fascinating summer interning at the National Archives. We are excited for Seth to have had this wonderful opportunity and asked him to share his experiences below.

This summer, I interned at the National Archives assisting with the Lincoln Archives Digital Project. The Lincoln Archives Digital Project is a website that posts documents used during Lincoln’s presidency that are stored at the National Archives. Throughout the summer, I was in charge of the letters that were used to discharge immigrants from the Union Army because they were not yet legal citizens of the United States. The letters were issued to Edwin Stanton, the Secretary of War, from Secretary of State William H. Seward, informing Stanton of their discharge. The majority of these immigrants came from modern-day Germany and Great Britain and were living in either Wisconsin, Pennsylvania, or Maryland.

My duties included taking inventory of all of the letters, scanning and photoshopping the letters for the website, as well as typing out the software coding for the letters to be posted onto the website. Apart from myself, I worked with 3 other students, who were working on their own document collections, and with my supervisor and founder of the website, Karen Needles. On Mondays we would work at the National Archives facility in College Park, Maryland where we would focus on the website programming. The following Tuesdays, Wednesdays, and Thursdays, involved working at the main building in Washington, D.C. where we would continue our work on inventory, scanning, or photoshopping.

During my internship, I had time do my own research, and I found Abraham Lincoln’s signature in regards to a pardon case. I also discovered my great-grandfather’s promotion notice during his service in World War I. Working at the National Archives was a surreal experience as I was working in one of the world’s largest archival facilities, as well as one of the most historic places in the United States. I gained new skills during my internship, such as advanced computer knowledge, and feel I have really improved my research skills. I also got to see three of my professors who have taught me in previous classes here at Iowa. They were doing their own research, which I thought was neat to see.

As well as my internship, I had plenty of time to explore Washington, D.C. My favorite things in D.C. were visiting the Library of Congress, touring the FBI Building, spending the 4th of July on the National Mall, and watching the Washington Capitals win the Stanley Cup. I had a great summer living in D.C. and my internship will be an experience I will never forget!