Welcome to the University of Iowa Libraries’ virtual New Book Shelf. Here we will present new titles for you to browse and check out. Titles listed here will be monographs published in the current year. If you see a title you would like to borrow, please click the link below the item and sign in with your Hawk ID and Password to request a loan. 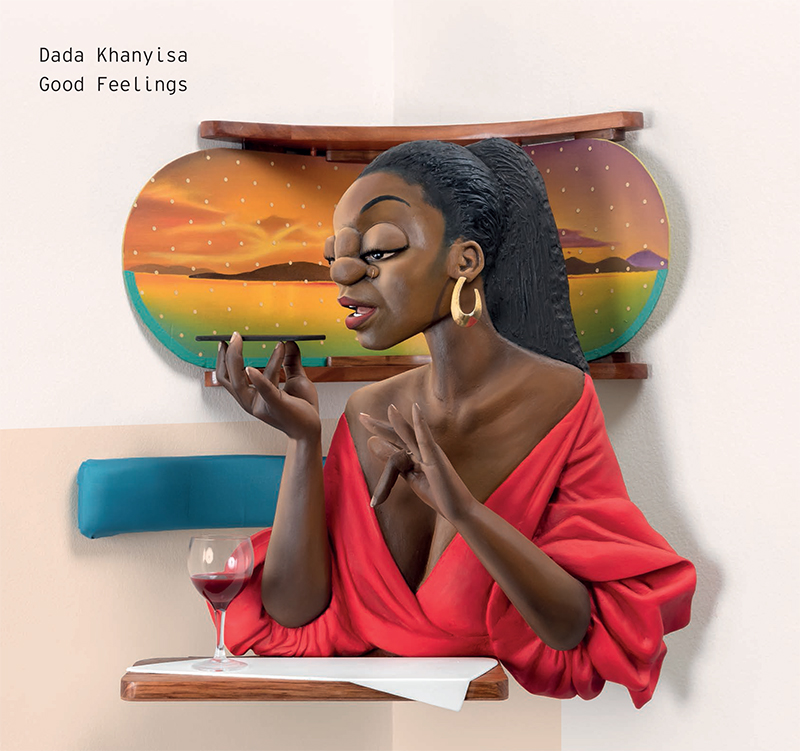 This catalogue is published on the occasion of Dada Khanyisa’s second exhibition with Stevenson, Good Feelings, in which Khanyisa fractures their narrative process, creating solipsistic scenes set against the backdrop of communal living. In this presentation in Khanyisa’s ‘solution-based practice’ – described as nakanjani (‘by whatever means’) – place is foregrounded in an unprecedented way and the multidimensionality of the artist’s paintings is broadened formally, conceptually and referentially.

The catalogue spans early and recent works, and features an essay by Sinazo Chiya, studio notes from an interview by Sisipho Ngodwana and Alexander Richards, and a conversation between Khanyisa and Julie Nxadi looking at process, historical ugliness and the occupation of space. From one exchange:

Nxadi: There’s a lot of things that are going on at the same time and I think siyathanda uku instructor [we love instructing] and sometimes we need to take a break from the instruction and just tell the story.

Khanyisa: Yeah, tell the story. It has to come out. It has to exist, it has to be there, it has to be in the world. I guess that’s the instructive element. But as far as having to carry the load of fixing the social wrongs or social ills …? Because there’s also that thing that as Black cultural practitioners we can’t just focus on fynbos. And ‘they’ are like, okay, we get your fynbos obsession but the hood is burning.

Where is your bucket? The hood is burning, dawg.

We are here and we are doing it. So there is also a need to celebrate that. A need to celebrate the beautiful. Getting back from work and taking off your bra and just chilling – that decompression element – It’s a point of interest to me. I understand why people go out because I go out and it’s interesting the things that play out and what they say about the greater South Africa.

Forms of Persuasion: Art and Corporate Image in the 1960s

In the 1960s, multinational corporations faced new image problems—and turned to the art world for some unexpected solutions.

The 1960s saw artists and multinational corporations exploring new ways to use art for commercial gain. Whereas many art historical accounts of this period privilege radical artistic practices that seem to oppose the dominant values of capitalism, Alex J. Taylor instead reveals an art world deeply immersed in the imperatives of big business.

From Andy Warhol’s work for packaged goods manufacturers to Richard Serra’s involvement with the steel industry, Taylor demonstrates how major artists of the period provided brands with “forms of persuasion” that bolstered corporate power, prestige, and profit. Drawing on extensive original research conducted in artist, gallery, and corporate archives, Taylor recovers a flourishing field of promotional initiatives that saw artists, advertising creatives, and executives working around the same tables. As museums continue to grapple with the ethical dilemmas posed by funding from oil companies, military suppliers, and drug manufacturers, Forms of Persuasion returns to these earlier relations between artists and multinational corporations to examine the complex aesthetic and ideological terms of their enduring entanglements.

A gripping, richly illustrated recounting of the battle indigenous Ecuadorians and their allies waged against Texaco/Chevron over the energy company’s destruction of portions of the Amazon. As a teenager, Pablo Fajardo worked in the Amazonian oil fields, where he witnessed the consequences of Texaco/Chevron’s indifference to the environment and to the inhabitants of the Amazon. Fajardo mobilized with his peers to seek reparations and in time became the lead counsel for UDAPT (Union of People Affected by Texaco), a group of more than thirty thousand small farmers and indigenous people from the northern Ecuadorian Amazon who continue to fight for reparations and remediation to this day.

Walled Gardens: Autonomy, Automation, and Art After the Internet

Walled Gardens: Autonomy, Automation, and Art After the Internet is the study of a young generation of artists characterised by their engagement with new Internet technologies that have come to reorganize life and labour online, from mobile Internet and social media to Cloud Computing. Often
grouped around the much-contested term ‘post-Internet art’, these artists work across a range of genre DS including sculpture, performance, and moving image DS in order to confront the relationship between technology and society in the twenty first century. Focusing on art works produced between 2008
and 2016 in Europe and the US, this book situates the emergence of the field in a historical context of global economic downturn and climate catastrophe, positing that new Internet technologies were developed in a mutually co-constitutive relationship with crisis. Characterised by ease of use,
portability, and accessibility, such technologies are the reason why the Internet has become an ever-increasing part of daily life. Yet they are also examples of ‘walled gardens’: proprietary formats in which one’s control over functionality or content is highly restricted. Strikingly, many artists
have chosen to work with rather than against these technologies and, in so doing, perform complicity with the very structures that they seek to interrogate. Walled Gardens asks how might we make sense of this assimilation with proprietary technologies, and argues that what these artworks reveal is a
model of subjectivity conditioned by a dynamic between autonomy and automation.

Marcelo Brodskys practice is situated at the crossroads between visual arts, poetry, and human rights activism. Using images from documentary archives, he manipulates them by adding handwritten comments and highlighting details with bright colours, stimulating a dialogue between the pre-existing narratives conveyed by the original photographs and his own interpretations. Poetics of Resistance features two major groups of works created between 2014 and 2019, on the international protests of 1968 and on the process of decolonisation in Africa in the 20th century, plus ongoing inquiries into anti-Franco resistance in Spain and todays urgent topic of migrants and refugees.

Rockers: The Making of Reggae’s Most Iconic Film

Set amongst the reggae scene of late 70s Jamaica, the film Rockers achieved instant cult status among music and cinema fans. Rockers’ director, Ted Bafaloukos has received many accolades for his work on the film, but the fact that he was also a fine writer and undercover photographer is often overlooked. Bafaloukos penned this vivid autobiography in 2005 and passed in 2016.

Beyond Bafaloukos’ fascinating story of the “making-of” Rockers, it tells the tale of a Greek immigrant from a family of sailors and his move to New York, eventually rubbing shoulders with the likes of The Velvet Underground, Robert Frank, Jessica Lange and Philippe “Man on Wire” Petit. But there’s a twist to this 1970s’ New York story: Bafaloukos fell in love with reggae when it was still just an underground facet of Jamaican culture in the City. His experiences in New York eventually led him to shoot Rockers, praised for the portrait it paints of Kingston’s late 70s music scene along with its unique style, mentality and fashion.

The director’s intense experiences in Jamaica and New York between ’75 – ’78 provide the substance of the scorching stories within, including; gunshots at his first ever reggae concert in Brooklyn, the director’s bizarre arrest for suspicion of being a CIA operative, paranoia at the Bob Marley compound, musicians-turned actors’ “rude boy” antics, and naturally, sympathetic, highly descriptive recollections of the music that first drew Bafaloukos into Jamaica’s music and culture.

An invaluable collection of photographs taken during the conception, writing and production of the film captures the zeitgeist and breathes life into the book. Production stills and photos taken during the era by Bafaloukos form the visual, cinematic backbone of the tome, faithfully rendering the amazing people, styles, and locations in living, breathing color. Taken all together, the text and images within Rockers will uncover new facets of this all-important era in Reggae music for even the most seasoned reggae aficionados. Beyond reggae circles, this new anthology offers an unparalleled snapshot of a highly fantasized and sought after je-ne sais-quoi: the all-time Jamaican cool.

For more than 30 years, Ramón Paolini (born 1949) has photographed the city of Caracas. This volume collects more than 120 photographs illustrating a modern city of cement, steel and glass surrounded by lush nature, mountains, valleys and rivers.

“What is it about a dull yellow metal that drives men to abandon their homes, sell their belongings and cross a continent in order to risk life, limbs and sanity for a dream?” – Sebastião Salgado

When Sebastião Salgado was finally authorized to visit Serra Pelada in September 1986, having been blocked for six years by Brazil’s military authorities, he was ill-prepared to take in the extraordinary spectacle that awaited him on this remote hilltop on the edge of the Amazon rainforest. Before him opened a vast hole, some 200 meters wide and deep, teeming with tens of thousands of barely-clothed men. Half of them carried sacks weighing up to 40 kilograms up wooden ladders, the others leaping down muddy slopes back into the cavernous maw. Their bodies and faces were the color of ochre, stained by the iron ore in the earth they had excavated.

After gold was discovered in one of its streams in 1979, Serra Pelada evoked the long-promised El Dorado as the world’s largest open-air gold mine, employing some 50,000 diggers in appalling conditions. Today, Brazil’s wildest gold rush is merely the stuff of legend, kept alive by a few happy memories, many pained regrets―and Sebastião Salgado’s photographs.

Color dominated the glossy pages of magazines when Salgado shot these images. Black and white was a risky path, but the Serra Pelada portfolio would mark a return to the grace of monochrome photography, following a tradition whose masters, from Edward Weston and Brassaï to Robert Capa and Henri Cartier-Bresson, had defined the early and mid-20th century. When Salgado’s images reached The New York Times Magazine, something extraordinary happened: there was complete silence. “In my entire career at The New York Times,” recalled photo editor Peter Howe, “I never saw editors react to any set of pictures as they did to Serra Pelada.”

Today, with photography absorbed by the art world and digital manipulation, Salgado’s portfolio holds a biblical quality and projects an immediacy that makes them vividly contemporary. The mine at Serra Pelada has been long closed, yet the intense drama of the gold rush leaps out of these images.

This book gathers Salgado’s complete Serra Pelada portfolio in museum-quality reproductions, accompanied by a foreword by the photographer and an essay by Alan Riding.

Also available in a signed and limited Collector’s Edition and as an Art Edition.