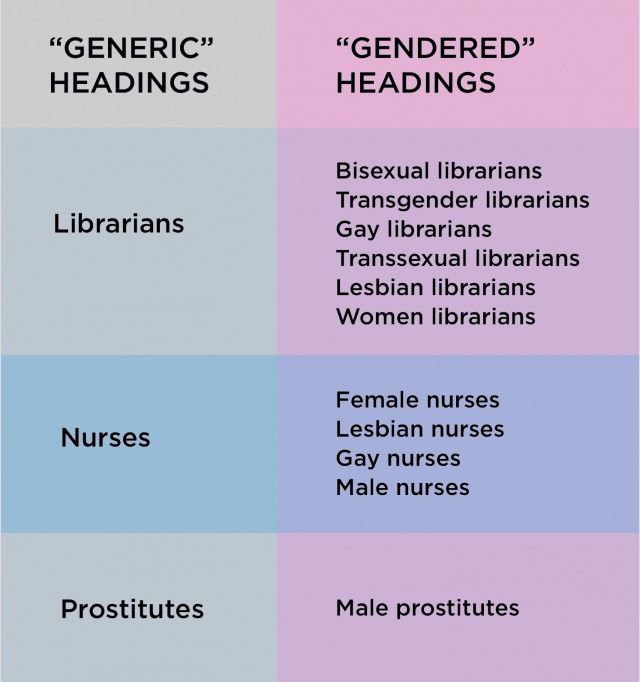 By Elizabeth Cox, head of cataloging-metadata at the UI Libraries

When you think of diversity issues at a university, you probably think of faculty and student representation, or maybe course topics. Rarely do people, perhaps even librarians, think of the online catalog or those who put information in it: the catalogers.

Catalogers are highly trained, detail-oriented librarians and staff who succinctly describe the library’s materials for students, faculty, and staff to find and use. We have particular databases and many sets of rules and guidelines to follow, from local to international. We provide subject headings or descriptors to every item in the online catalog (at the UI Libraries, our online catalog is called InfoHawk+).

For decades, librarians at the national and international levels have determined “authorized” headings. By using these headings, a library user can go into almost any library and find material on a particular subject, because most libraries use the same headings. In the United States, most academic and research libraries use the Library of Congress subject headings list.

Because the burden of standardizing these headings lies with a single organization (the Library of Congress), it can take time for the headings to catch up with the culture. Over the years, catalogers have raised questions about this process, noting the importance of balancing the use of historical terminology against the need to adopt new terminology. In some instances, new terminology can reflect changing societal views and prevent the proliferation of outdated ideas.

In 2016, subject headings hit the national news. A group of Dartmouth College students, Dartmouth librarians, and the Coalition for Immigration Reform, Equality and DREAMers (CoFIRED) petitioned the Library of Congress to remove “Illegal aliens” as a subject heading. At first, the Library of Congress denied the request, citing use of the term in “authoritative sources for legal terminology.”

However, members of the American Library Association collaborated with the Library of Congress, forming a working group to review the issue. The group reached a compromise, agreeing to replace the term “aliens” with “noncitizens” and to replace “illegal aliens” with “undocumented immigrants.” Members of the U.S. House of Representatives Appropriations Committee introduced a bill (H.R. 4926 – Stopping Partisan Policy at the Library of Congress Act) calling for retention of the headings “aliens” and “illegal aliens.” In April 2016, the bill was referred to the Committee on House Administration, but it went no further. The Library of Congress continues to use the terms “aliens” and “illegal aliens” as subject headings.

Catalogers have also noted concerns with headings related to people with disabilities, as well as biases related to culture, class, or country of origin. This hits very close to home in Iowa when searching for the nearby community of the Meskwaki Nation, the Sac and Fox Tribe of the Mississippi. A search of the Library of Congress database for “Meskwaki” refers you to the heading, “Fox Indians,” listing “Meskwaki Indians” as a variant or unused term. Not only does it fail to refer to the Sac Tribe, but it uses the old terminology “Indians” rather than “Native Americans.”

Simply being aware of these issues is a good start, but librarians can be more vigilant about noticing the discrepancies in online catalogs and be more proactive in making positive changes to reflect the diverse world around us and provide more equitable, inclusive, and diverse databases for our library users.