Traveling exhibit to mark the 400th anniversary of Shakespeare’s death 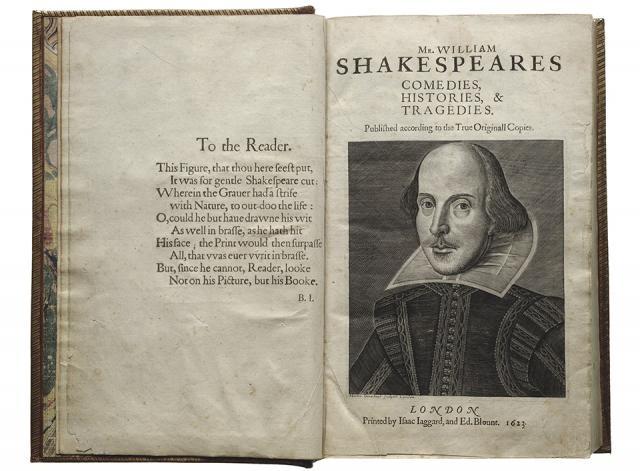 The University of Iowa Libraries has been selected as the host site for the state of Iowa for First Folio! The Book that Gave Us Shakespeare, a national traveling exhibition of the Shakespeare First Folio, one of the world’s most treasured books.

The Folger Shakespeare Library, in partnership with Cincinnati Museum Center and the American Library Association, is touring a First Folio of Shakespeare in 2016 to all 50 states, Washington, D.C., and Puerto Rico.

“We are incredibly excited to have the opportunity to showcase one of the most important books ever printed,” says University Librarian John Culshaw. “How appropriate that the First Folio visit the University of Iowa, in Iowa City, the only UNESCO City of Literature in the United States. First Folio! will be the first travelling exhibit hosted in the UI Main Library exhibition space, which is currently undergoing renovation and slated to open later this year. As the only stop on the tour in the state of Iowa, we welcome all Iowans to visit the Libraries and experience this unique piece of history.”

“The First Folio is the book that gave us Shakespeare. Between its covers we discover his most famous characters—Hamlet, Desdemona, Cordelia, Macbeth, Romeo, Juliet, and hundreds of others—speaking words that continue to move and inspire us,” says Michael Witmore, director of the Folger Shakespeare Library. “Shakespeare tells the human story like no one else. We are delighted that we can share this precious resource with people everywhere.”

When the First Folio arrives in Iowa City, its pages will be opened to the most quoted line from Shakespeare and one of the most quoted lines in the world, “to be or not to be” from Hamlet. Accompanying the book will be a multi-panel exhibition exploring the significance of Shakespeare, then and now, with additional digital content and interactive activities.

“In addition to showcasing the First Folio, the Libraries will be highlighting other examples of English early printed materials in an expansive exhibition,” says Greg Prickman, head of Special Collections. “We are also excited to be working with many campus and community partners to host a range of programs for the public.”

Final touring dates for First Folio! The Book that Gave Us Shakespeare will be announced in April.

The Folger Shakespeare Library holds 82 copies of the First Folio, by far the largest collection in the world and more than a third of the 233 known copies in the world today. It is believed that 750 copies were originally printed.

First Folio! The Book that Gave Us Shakespeare has been made possible in part by a major grant from the National Endowment for the Humanities: Exploring the human endeavor, and by the generous support of Google.org and Vinton and Sigrid Cerf. Sponsorship opportunities of this major exhibition and the Folger’s other Wonder of Will programs commemorating the 400th anniversary of Shakespeare’s death are available; learn more at www.folger.edu.

About University of Iowa Libraries

The University of Iowa Libraries provides leadership in the creation, transmission, and preservation of knowledge to advance intellectual discovery and encourage lifelong learning. With print and digital collections that are richly diverse and deeply comprehensive, the Libraries also offers state-of-the-art resources that enhance teaching and learning on campus and beyond. In partnership with the teaching faculty, the Libraries offers a variety of information literacy and course-related instructional programs designed to develop these critical skills in students in all disciplines. The Libraries is the largest library system in Iowa and ranks 14th among materials expenditures among U.S. public research libraries. University Libraries is proud of its role as the foundation on which the University of Iowa’s academic and research programs rest.

About Folger Shakespeare Library
Folger Shakespeare Library is a world-renowned center for scholarship, learning, culture, and the arts. It is home to the world’s largest Shakespeare collection and a primary repository for rare materials from the early modern period (1500-1750). The Folger is an internationally recognized research library offering advanced scholarly programs in the humanities; an innovator in the preservation of rare materials; a national leader in how Shakespeare is taught in grades K–12; and an award-winning producer of cultural and arts programs—theatre, music, poetry, exhibits, lectures and family programs. Learn more at www.folger.edu.

About Cincinnati Museum Center
Cincinnati Museum Center (CMC) at Union Terminal is a nationally recognized institution and national historic landmark. Dedicated to sparking community dialogue, insight and inspiration, CMC was awarded the 2009 National Medal for Museum and Library Service from the Institute of Museum and Library Services and received accreditation from the American Alliance of Museums in 2012. CMC is one of only 16 museums in the nation with both of these honors, making it a unique asset and a vital community resource. Union Terminal has been voted the nation’s 45th most important building by the American Institute of Architects. Organizations within CMC include the Cincinnati History Museum, Duke Energy Children’s Museum, Museum of Natural History & Science, Robert D. Lindner Family OMNIMAX® Theater and Cincinnati History Library & Archives. Recognized by Forbes Traveler Magazine as the 17th most visited museum in the country, CMC welcomes more than one million visitors annually. For more information, visit www.cincymuseum.org.

ALA’s Public Programs Office provides leadership, resources, training and networking opportunities that help thousands of librarians nationwide develop and host cultural programs for adult, young adult and family audiences. The mission of the ALA Public Programs Office is to promote cultural programming as an essential part of library service in all types of libraries. Projects include book and film discussion series, literary and cultural programs featuring authors and artists, professional development opportunities and traveling exhibitions. School, public, academic and special libraries nationwide benefit from the office’s programming initiatives. Additional information can be found at www.ala.org/programming.

About the National Endowment for the Humanities

Created in 1965 as an independent federal agency, the National Endowment for the Humanities supports research and learning in history, literature, philosophy, and other areas of the humanities by funding selected, peer-reviewed proposals from around the nation. Additional information about the National Endowment for the Humanities and its grant programs is available at www.neh.gov.