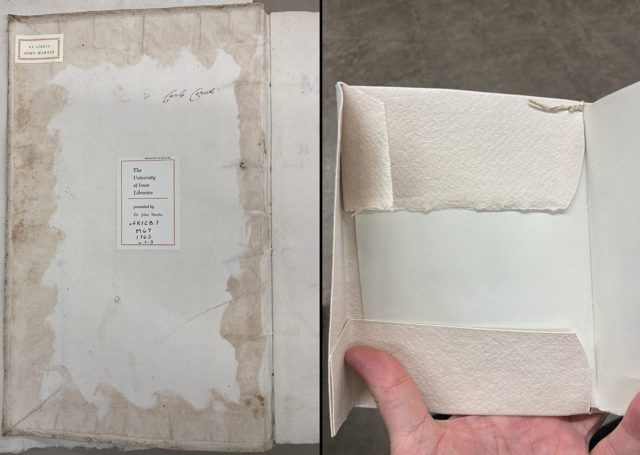 When volumes arrive in conservation, the first step is a quick assessment. Often this entails physical inspection of a cart of 30-80 items, ticking off from a checklist of the most common repairs or housings we provide. When an individual item is shuffled to a technician’s bench, a more thorough assessment can be completed. At first pass, I had put this item into a queue needing more intensive repair. The binding had become disengaged from the textblock, and though it looked otherwise sound, I set it aside to tackle at a future date. 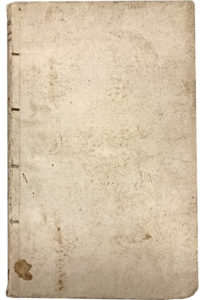 It’s always delightful when an Italian paper binding comes into the lab for some treatment. They are a pleasure to hold and often have some quirks. Paper bindings were common in Italy from the early sixteenth century through the early nineteenth century. This Morgagni is an example of one of the two main types: a laced-case binding. For non-binders, this means the textblock was sewn onto alum taw (a white leather) supports, which were then laced through the single-piece heavy paper cover.

Paper bindings served two purposes; they were either placed on a textblock for temporary protection, assuming that the owner would eventually pay to have a more distinguished binding, or intended to be a less expensive final binding. It can be difficult to tell what the intention was. In this particular volume, the pages were never trimmed, and the rippling edges are the result of the deckle (wooden frame) of the paper mould (screen). These edges would have been trimmed to be flush and perhaps decorated in a different binding.

Additionally, the single-layer paper cover has no reinforcement. It remains very flexible on a book of this size while very thin and still protective. However, I think this may have originally been intended as a temporary measure rather than a final binding. The large size of the volume (10.25 in x 16.14 in) would likely require more substantial binding for handling, which would have cost a hefty sum. Additionally, the printing style seems to demand a more decorative binding. 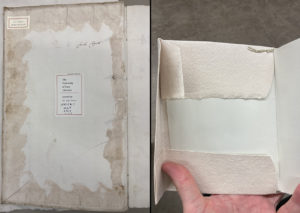 Upon closer inspection, I noticed that the taw thongs were cleanly cut at the textblock. The thongs also remained intact on the rear cover and under the paste down. Though removing a portion of the textblock resulted in a spine that was now too wide for the text that remained, no damage was present on the paper cover. Since it was paper, the cover had been able to naturally refold itself and conform to the smaller size of the spine. 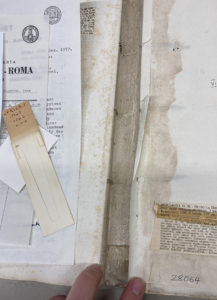 There were a handful of documents stuck in the text. Among them was a note from the purchase by Dr. Martin. It indicated that the item had been received by him, and then later by the library, in this condition.

Ultimately, this item will get custom housing [storage box] and return to the collection without any intensive treatment. I will clean the cover – using specialized sponges and perhaps a gel for the stained corner – but the sewing will remain broken, and the textblock will remain disengaged. 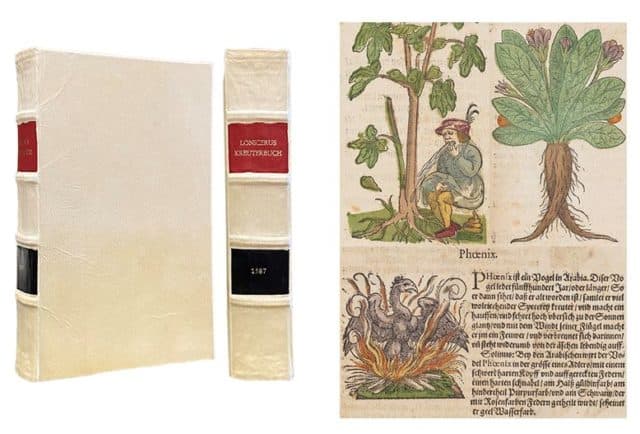 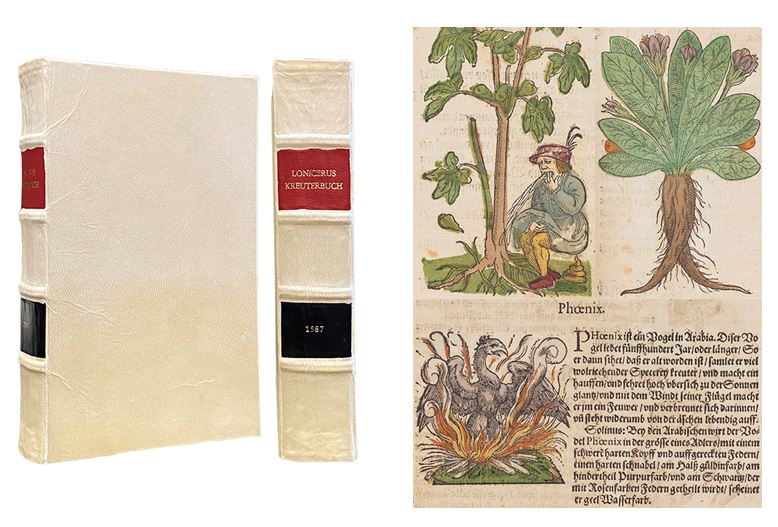 We know from other sources that Lonicer (also referenced as Lonitzer, Lonicerum, Lonicerus, or Loniceri) worked as a proofreader for his father-in-law, a German printer who specialized in producing herbals. He eventually went on to write his own works covering mathematics, medicine, and botany. Kreuterbuch… (originally titled in Latin, Naturalis historiae opus novum) was published in 1546 and, although much of it was not original to Lonicer, became a hit. The book saw several editions, including the 1587 edition described here. The last edition was printed in 1783.

The text covers much of the known natural world at the time and had a wide audience that included physicians, apothecaries, and both rural and urban householders. The emphasis is on how one uses animal, vegetable, and mineral substances in the production of medicinal, gastronomical, and household preparations. Lonicer provides us with one of the early descriptions of local flora, and, among his other accomplishments, he is one of the first to distinguish deciduous trees from conifers.

The most striking features of this book are its hundreds of hand-colored woodcuts. As one can imagine, coloring in each image is an intensive task and would have greatly increased the cost of the book. Because of this, many existing early printed herbals are found unpainted. The book was rebound at an unknown point in the 20th century with a soft, milky vellum (calfskin parchment) over pasteboard (sheets of paper pasted together to create a stiff board). The spine titling consists of black and red leather labels with gold tooling. These contrast nicely with the lighter cover.

The book also has excellent examples of conservation work, including the application of a thin, strong Japanese paper on the outer margin of the first leaf. This part of the leaf has been heavily used and is now damaged and brittle. The application of the paper support strengthens the edge and lessens the chance of further damage. This same paper was also to repair the inner margin between a few other leaves. The text block shows the staining, wear, and foxing (oxidation of iron particles in the paper) one would expect from a book of this age but is still in great condition. With proper care, it will have a happy, long life here at the John Martin Rare Book Room!

For more on Lonicer and other Herbals, check out the U. S. National Library of Medicine and the Edward Worth Library in Dublin.

If you or your group are interested in seeing this or other items mentioned in our newsletters, please contact Damien Ihrig at damien-ihrig@uiowa.edu to arrange a visit in person (one person) or over Zoom (one or more people).

Individuals with disabilities are encouraged to attend all University of Iowa-sponsored events. If you are a person with a disability who requires a reasonable accommodation in order to participate in this program, please contact our office in advance at damien-ihrig@uiowa.edu or 319-335-9154.