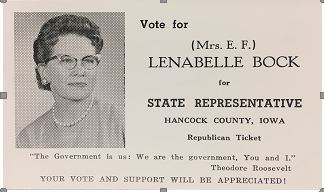 Today, the Iowa Women’s Archives commemorates Lenabelle Bock. Bock, whose name is spelled variously Lenabelle and Lena Belle, was politically active in Iowa for over twenty-five years before her election to the Iowa House of Representatives. Bock, a Republican, campaigned for and won the House seat for Hancock County. She was one of five women elected to the House in 1960. She is often remembered for her statement: “Women in the legislature need to look like a girl, act like a lady, think like a man, and work like a dog.”

When I was starting research for my MA on women in politics in Iowa in the 1950-60s, I was delighted by the trove of useful primary sources I found at the Iowa Women’s Archives.  One of the best finds of my research there, which in turn helped shape my MA project, was discovering the political

scrapbook of Lenabelle Bock, who served the Iowa House of Representatives from 1961-1965.  What struck me most about the Lenabelle Bock scrapbook was its compilation – I saw her constructing a narrative about her political career not just in what she chose to keep and collect in the pages of a scrapbook, but in how she decided to compile it.  For example, Bock placed a newspaper article listing her as a candidate at a Republican rally opposite a page describing her as “our state representative” at the same rally the next year, despite the majority of the scrapbook running month-to-month chronologically.  She was making a conscious connection between the two events, as if to say that she made good on her candidacy.