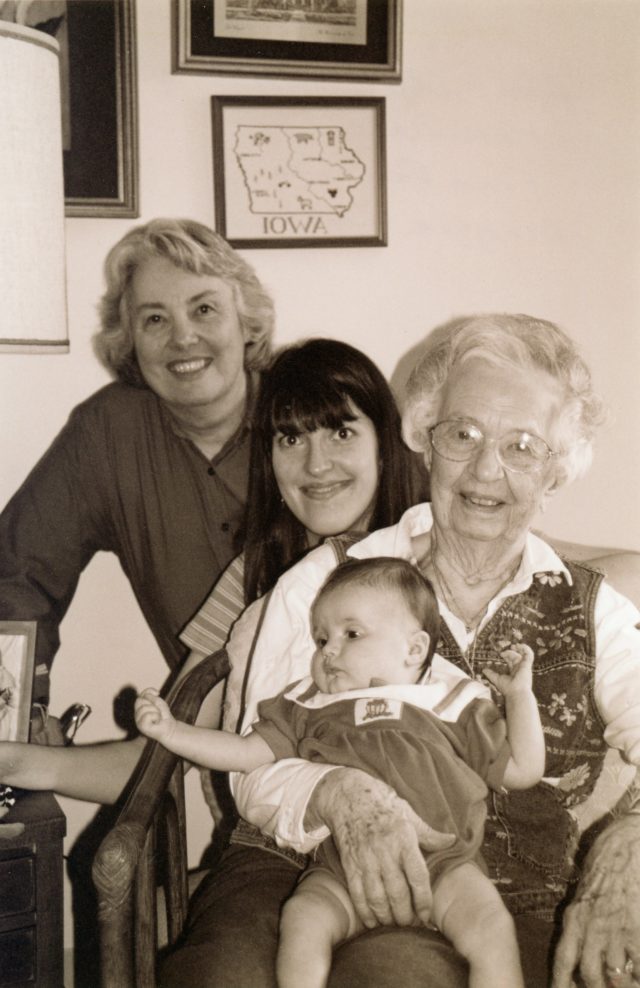 Clara Conrad entered the Graham Hospital Training School for Nurses in 1902. She was the first student to enroll in the new program and the only person in her class. A full graduation ceremony was held in her honor a year later proclaiming her as one of the first graduates from a professional nursing program in Iowa. Her daughter, Frances Hogle, and granddaughters, Ann Fellows and Carol Fellows, would also go on to have momentous adventures of their own.

Frances Hogle, the daughter of Clara Conrad Hogle, earned both a Bachelor and Master of Arts from the State University of Iowa (now the University of Iowa). She used her degrees to teach in rural Iowa for years before moving to Texas with her husband Kenneth Fellows. While there she worked as a pianist for the local Methodist Church and was the society editor for her husband’s paper, the Alice Echo. In 1999, she wrote an autobiography describing her life and the adventures she had while exploring the world. She and her husband spent much of their time traveling, especially after retirement. They traveled around the United States regularly and often took cruises everywhere from Alaska to Russia.

Ann Fellows, the eldest child of Frances Fellows, had the same interest in exploring the world as her parents. After returning to her mother’s alma mater to get a degree in Political Science in 1958, she moved to New York City and worked at Time Magazine as a clerk. In the summer of 1960, she participated in Operation Crossroads Africa to improve roads in Sierra Leone. Then she returned to the Midwest to work at the Lake County Public Library in Indiana. A few years later the travel bug hit again, and Fellows moved to Australia to work overseas. When she returned from that trip, she married John Christenson and lived in Rockledge, Florida. The couple moved to Minnesota, which they called home for many years, and eventually settled in Iowa City, Iowa to be closer to their adult children. There Ann Fellows Christenson joined 100 Grannies, a non-profit organization that is dedicated to green energy and has their records housed at the Iowa Women’s Archives.

Carol Fellows, the second daughter of Frances Fellows, made strides into the medical field like her great grandmother Clara. In 1972, she graduated with a MD from the University of New Mexico School of Medicine. She excelled in the jobs she took, even getting Intern of the Year at her position at the Rose Medical Center in Denver, Colorado. She moved to Capser, Wyoming where she became the first radiation oncologist in the state. While there she co-founded the Central Wyoming Cancer Center and Hospice Program. She served as the center’s first director for almost ten years. A career change came when Fellows decided to leave the medical field and become the chief of Staff to Mike Sullivan, the then Governor of Wyoming, in 1987. Two years later the call of the medical field returned, and she moved to Kalamath Falls, Oregon to found the Merle West Cancer Medical Center (now Sky Lakes). Even after retirement in 2005, she rose to leadership in her local Rotary Club and worked on volunteer projects relentlessly.

These are just a few of the adventures found of the Fellows Family papers. The papers cover the lives of these four wonderful women and their extended family as they live through major world events and everyday achievements. From the American Civil War to running an award-winning paper, this collection is full of adventure.